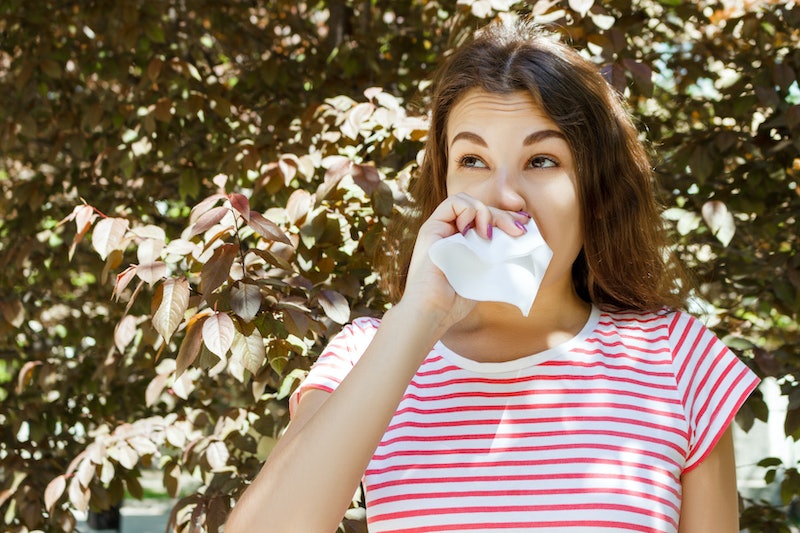 Look away, fellow hypochondriacs, because it turns out you're totally capable of leaking brain fluid out your nose. A Nebraska woman recently found out that what she thought was a persistent runny nose was in fact a cerebrospinal fluid leak that had been growing progressively worse since a car accident in 2013, CNN reported.

Kendra Jackson, 52, was sitting in her parked van when another woman crashed into it, "throwing her face-first into the steering wheel and breaking her shoulder in two places," according to BuzzFeed. Jackson required two surgeries to get back to fighting form, but despite the treatments, she began suffering from migraines. It wasn't until two and a half years later, though, that her nose began to run.

She told CNN, "When it first started out, I just thought it was my allergies or a runny nose — like the beginning of a fresh cold."

But the new symptom didn't ease off the way allergies or a cold would. Clear liquid streamed from her nose, requiring her to start "using three to four boxes of tissues a week, and [...] carry them with her everywhere," BuzzFeed reported.

"When I would wake up in the morning and I would sit up, it was like a waterfall," Jackson told BuzzFeed, which added that Jackson's "pillows, nightgown, and bed sheets were soaked with fluid" each morning. Jackson told CNN she was losing half a liter of fluid a day through her nose.

Though Jackson sought help from multiple doctors, no one provided her with a diagnosis or medical solution that worked. Most doctors she saw told her she had allergies, CNN reported. And Jackson told BuzzFeed that her symptoms got "so bad, for so long, she even started to have suicidal thoughts. [...] No one seemed to be able to figure out what was wrong or give her a treatment that actually helped."

"When it didn't go away, I kept going back and forth to the doctors, and they prescribed every kind of medicine you can think of, and my nose just kept on running," Jackson told CNN. She then went to see an ear, nose, and throat specialist practicing at Nebraska Medicine. "It was evident right away that this was something that was creating a lot of dysfunction in her life," the physician, Carla Schneider told BuzzFeed. "It was bothering her to the point of just feeling almost kind of depressed about it."

Schneider told BuzzFeed the amount of fluid coming out of Jackson's nose was far from normal. "Just based on her description of the amount of draining, I knew that [...] wasn't typical for any type of allergic rhinitis."

According to CNN, when a physician's assistant pointed out that Jackson's symptoms were consistent with a cerebrospinal fluid leak, physicians took a sample for evaluation and realized that, yes, it was not mucus coming out of Jackson's nose: It was brain and spinal fluid.

It turned out Jackson's car accident had likely caused a very small hole in her cribriform plate ("a thin bone that separates her cranial and nasal cavities," according to CNN) which is "very thin, less than a potato chip," Dr. Christie Barnes, a rhinologist at Nebraska Medicine, explained to CNN. The area is one of the most common for a cerebrospinal fluid leak, she added.

Barnes said Jackson's accident "may have caused a bit of a thin area [at the cribriform plate]. Her symptoms actually started a little bit after (the accident), so for her, I think there's probably a combination of both the trauma and the increased pressure [around her brain]."

According to CNN, Jackson underwent surgery that used tissue from her nose and abdomen to plug up the small hole, stopping the leakage. As of May 9, Jackson is a month out from surgery, and told CNN, "I don't have the nasal drip anymore, but I still have the headaches. I actually feel pretty good, and I'm able to get a little bit of sleep."

Barnes told CNN that cerebrospinal fluid leaks can be life-threatening, and that they "also place the patient at an increased risk of infections such as meningitis." Jackson shared with CNN some words of advice for anyone who may be having similar symptoms and struggling, like she did, to find someone to correctly diagnose and treat them: "For people who hear my story, if they're tasting a very salty taste and something's draining in the back of your throat, it's probably something other than allergies. So get to the doctor."

More like this
6 Abortion Advocates To Follow On TikTok
By Sara Youngblood Gregory
The UK Abortion Laws In 2022, Explained
By Sophie McEvoy
How To Protect Your Digital Privacy If You Need An Abortion Post-Roe
By Kaitlyn Wylde
Lily Allen Was “Quite Emosh” After Performing Sober At Glastonbury Festival
By Stephanie Topacio Long
Get Even More From Bustle — Sign Up For The Newsletter