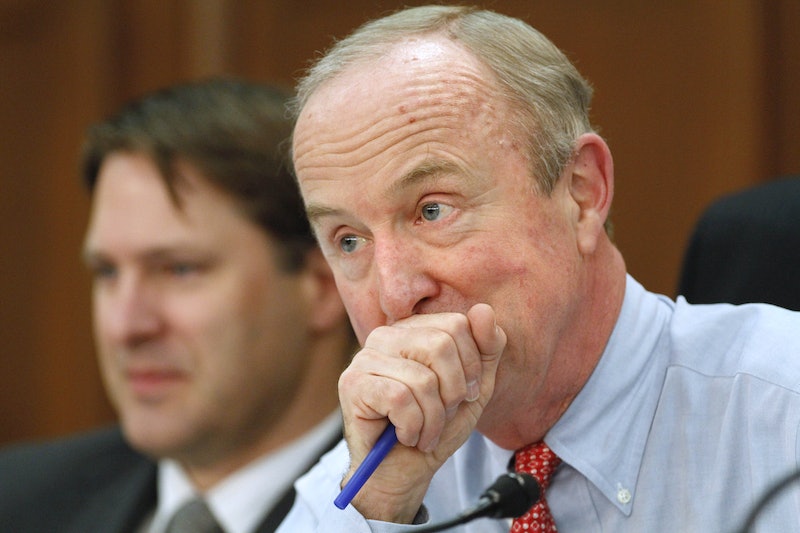 AP/REX/Shutterstock
By Mehreen Kasana
May 15, 2017

House Republican Rodney Frelinghuysen, New Jersey's powerful congressman who was recently appointed as the chairman of the House Appropriations Committee, sent an interesting letter to a constituent's employer highlighting her political activism. According to WNYC, the Republican complained about the constituent's progressive activism in a disturbing letter to Joseph O’Dowd of Lakeland Bank, whose is also a bank board member and donor to Frelinghuysen.

Lakeland Bank issued a public statement on their Facebook page saying that it does not publicly comment on employees, but that it does "promote our employees’ full awareness and interest in civic and political responsibility."

In the letter, Frelinghuysen claimed that Democrats target Republican districts like his because "we sit in a prime media markets and [Democratic] protesters are highly organized." The letter requested a donation to "fend off any attack I might receive." And right after signing the letter, Frelinghuysen personally wrote, "P.S. One of the ringleaders works in your bank!"

This ringleader reference was made toward Saily Avelenda — the bank's former senior vice president and assistant general counsel — who reportedly was involved in the NJ 11th For Change group, which came into existence after Donald Trump's election. The liberal-leaning group has built a considerable amount of pressure on Frelinghuysen to convene with locals and push against Trump's political ideology.

Avelenda told WNYC that political pressure and lack of comfort culminating after the letter contributed to her decision to step down from her position. "[Frelinghuysen's letter] did cause some issues at work that were difficult to overcome," she said.

NJ 11th For Change also released a statement on Frelinghuysen's letter saying, "[Frelinghuysen's] targeted, retaliatory letter to Saily Avelenda’s employer was intended to create an uncomfortable work environment for her. As a result, she was subjected to professional scrutiny about her personal political activities which directly contributed to her decision to resign."

Frelinghuysen's campaign responded to WNYC that he had written "a brief and innocuous note at the bottom of a personal letter" and that he was not "involved in any of the bank’s business and is unaware of any of the particulars about this employee’s status."

Whether Frelinghuysen agrees or not that his letter inadvertently ratted on an employee to her employers, it is critical to remember that this incident carries deep consequences for everyday Americans in the realm of political participation in a democratic society.

If a congressman can use his political clout to indirectly pressure a woman out of her job, civic society should be concerned for its right to free speech and political activities. Such an action delivers a message for those wielding considerable amounts of power: any form of intimidation is permissible in the arena of politics.