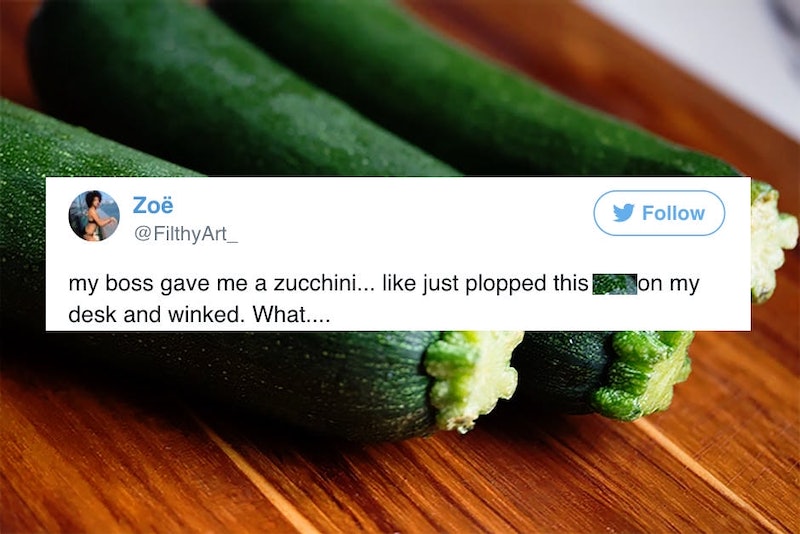 We've all had awkward interactions with our boss. Maybe you opened their office door while they were changing for the gym, or grabbed them inappropriately when you tripped at the company picnic, or said "This must be your daughter!" to the woman who turned out to be their third wife. These things happen. But the award for strangest interaction goes to the woman whose boss put a zucchini on her desk, and then winked.

In a tweet posted Monday, Zoë, who is a screenwriter in New York City, shared a picture of an admittedly impressive looking zucchini with the caption "my boss gave me a zucchini... like just plopped this shit on my desk and winked. What...."

Her followers were understandably concerned. Any story that begins with phallic-shaped produce and winks in the office usually ends in court or with someone being fired. Plus, ever since the eggplant emoji has emerged as a shorthand for "Want to sleep together and then have me never call you again?" throwing veggies around on coworkers' desks has become a pretty risky move.

Initially, the consensus was that Zoë should report her boss.

"Do not pass go. Go straight to HR. Collect $2M." one woman tweeted.

"One up him, give that man an eggplant," suggest an agent of chaos.

But it turns out the incident was far less troubling than it originally sounded. In a follow-up tweet, Zoë clarified:

Her boss wasn't a creepy man with a penchant for props, just an old woman who wants to share the bounty of her garden!

Her clarification went more viral than the original tweet, with over 16,000 likes, and almost 2,500 retweets.

"Well that de-escalated quickly," one follower observed. Even Zoë thought the misunderstanding was hilarious.

"'Girl you and everyone else was CONVINCED I was boutta get this payment from HR.' she tweeted.

The situation grew even more absurd when Zoë revealed that their office was having a sexual harassment seminar the next morning at 8 a.m.

Sexual or not, people still had some thoughts about the incident, and about a coworker randomly placing produce on your desk. Some were annoyed at the assumption the boss was male:

Some sounded pretty into it:

Some shared pictures of their own produce:

And some wanted clarity on whether there is in fact a correct way to present someone with a zucchini:

While the rules of office produce etiquette are still a little foggy, at least Zoë wasn't being hit on in a uniquely awful, visual way. Plus, did you see that zucchini? It's huge. She can be having zoodles for days.