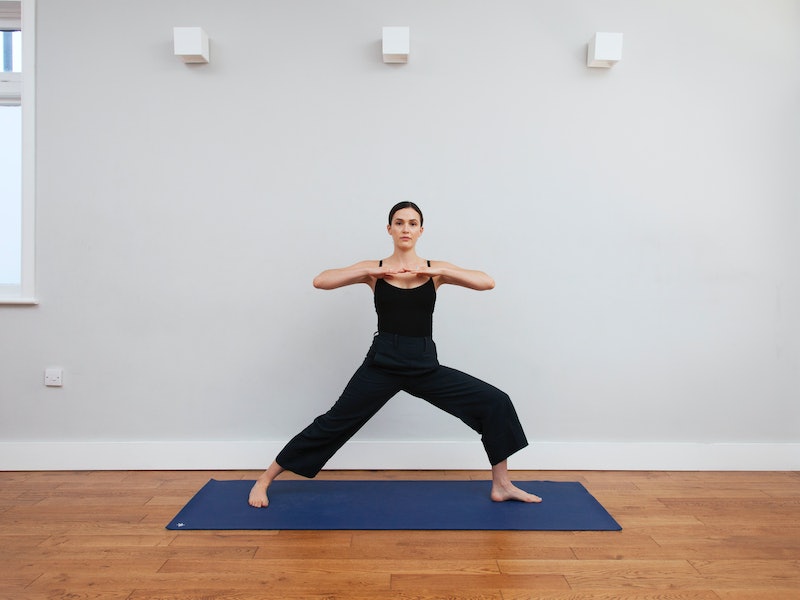 It might seem like you can learn only one thing from a yoga video about relieving menstrual cramps — how to use yoga to relieve your menstrual cramps. But five years after Adriene Mishler of Yoga with Adriene released a 2014 video called “Yoga For Cramps and PMS video for Women,” she decided to re-upload the sequence using gender-neutral language. While Mishler doesn’t typically remake videos, she re-released the highly successful segment so that people who menstruate of any gender can use the video.

The new Yoga For Cramps video, Mishler tells Bustle, "started as an offering that, to me, was long overdue for the Yoga with Adriene channel.” There are no more pink socks and no greetings to "ladies." Instead, Mishler keeps her language gender-neutral throughout the video. With these changes, her video on cramps and PMS is inclusive of trans men and nonbinary people who menstruate, and doesn't assume that all women menstruate.

In an October 2019 newsletter accompanying her re-release, Mishler explained that while she feels committed to not re-uploading videos — “in a world of filters and perfect curated edits, I feel it’s more generous to be honest and leave those videos be" — she thought it was important to "offer a new practice that respects affirming, neutral gender pronouns.”

She’s made an exception for this cramps and PMS video, which had nearly 754,000 views at the time of the change. “The decision to make this change and re-do the video really came as a response to countless messages and comments from people asking if I would consider using gender-neutral language,” she tells Bustle. She says that her viewers and followers informed her that the language directed at women made it feel exclusionary for trans men and nonbinary people, many of whom also menstruate. When she received these messages, she says, “I took it as a gift” of emotional honesty that she could transform into tangible, affirmative changes.

Mishler tells Bustle that this video redo is meant to explicitly welcome people of all genders into experiences typically assumed to be shared only by cis women — like menstruation. This also enabled Mishler to send a broader message, too. She tells Bustle that remaking the video “turned into a moment to help raise consciousness, spread awareness and remember [that] we must keep challenging our assumptions.”

These assumptions impact people at all levels of fitness experience, ranging from the fact that many gyms are inaccessible to people with physical disabilities, to the assumptions that athletic ability is dictated by gender, reinforced in K-12 gym classes. These kinds of assumptions about who belongs in gyms and who can accomplish what athletic feats can exclude people who are already marginalized in broader society.

Mishler hopes her transparency about updating the video will inspire others to join her in reflecting on any inadvertently exclusionary assumptions in their own fitness practices. “I thought if I let people in on my story with it, and let them witness my process and honest evolution,” she says, “then perhaps they would be inspired to investigate their own history, their own story, and their own assumptions and patterns.”

To make changes to the often exclusionary nature of fitness spaces, Mishler wants her yoga practice to “continue to make videos that challenge old ways of thinking and guiding wellness practices into the home.” In your own practice — whether it’s yoga or navigating other areas of your life — Mishler says that the most important thing is when people are “all showing up to learn how to love and care for ourselves — while still saying to the other people practicing, ‘I am here with you. I got you.’” Both in everyday life and throughout the fitness industry, Mishler acknowledges that it can be difficult and even embarrassing to admit mistakes. But, she says, “We must be willing to continually consider and reconsider our role in societal wellness. We must strive to contribute to the conversation in a meaningful way.”

This means — in both fitness and larger life contexts — “we must be willing to admit when we do not understand something or when we are wrong. We absolutely must ask and inspire questions.” And sometimes, these questions can inspire fuller embraces of people who have been marginalized by mainstream fitness for far too long.