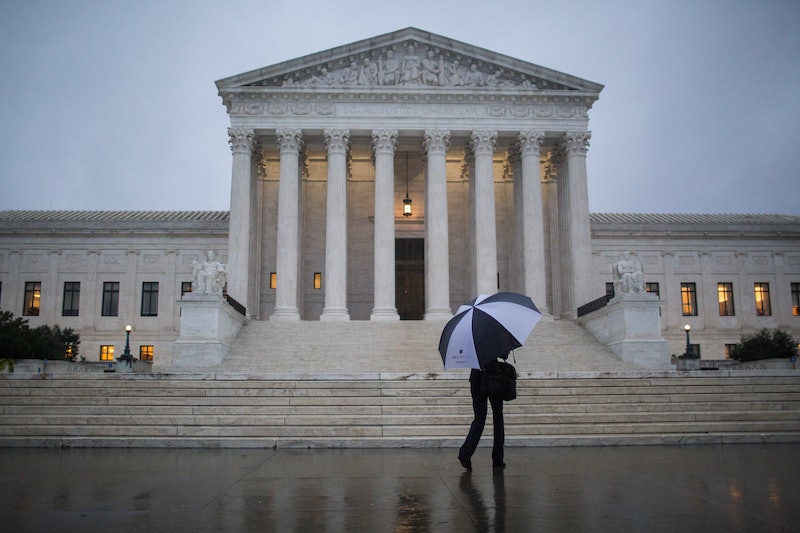 Under President Donald Trump, the Justice Department continues to challenge a climate change lawsuit brought forth by a group of young people who claim the federal government has failed to act on climate change. With the lawsuit set to go to trial in just over a week, the Justice Department has asked the Supreme Court to intervene and block a lower court from hearing the case.

In court documents filed Thursday, the Justice Department asked the Supreme Court to force a federal district court in Oregon, where the lawsuit is currently playing out, to end what it called a "profoundly misguided suit." The government argued the lower court had "declined to meaningfully narrow respondents' claims" and instead moved to allow the case to go to trial Oct. 29.

"The district court has allowed this improper suit to proceed for nearly three years over the repeated objections of the government," an application for a stay pending disposition filed by the Justice Department read. "This suit is an attempt to redirect federal environmental and energy policies through the courts rather than through the political process, by asserting a new and unsupported fundamental due process right to certain climate conditions."

In Juliana v. United States, which was filed in 2015, a group of 21 youths ranging from 10 to 21 years old claim the federal government has violated their Fifth Amendment rights to life, liberty, and property by not only failing to act on climate change but by actively promoting fossil fuels despite allegedly knowing what dangers carbon pollution posed.

The youth argue they have the right to "a climate system capable of sustaining human life" and allege the federal government is infringing on that right by not reducing carbon dioxide emissions. "Plaintiffs' substantive Fifth Amendment rights have been infringed because Defendants directly caused atmospheric CO2 to rise to levels that dangerously interfere with a stable climate system required alike by our nation and Plaintiffs," their lawsuit states. "The present CO2 concentration and continuing CO2 emissions — a function, in substantial part, of Defendants' historic and continuing permitting, authorizing, and subsidizing of fossil fuel extraction, production, transportation, and utilization — endangers Plaintiffs' lives, liberties, and property."

In response, the Justice Department has argued that the youths' complaints represent "generalized grievances" and not "an invasion of a legally protected interest." What's more they've claimed the youth behind the lawsuit "cannot establish that the government policies they challenge ... caused their asserted injuries."

This isn't the first time the federal government has asked the Supreme Court to intervene in this case. Court documents show the Supreme Court denied the government's request for a stay without prejudice in late July, calling it "premature." But, according to SCOTUSBlog, the Supreme Court did point out what they called the "striking" breadth of the plaintiffs' claims, noting that there would likely be "substantial grounds for difference of opinion" as to whether those claims were something a federal court could adjudicate.

In their latest application, the Justice Department has argued that the lower court failed to take the Supreme Court's remarks into account in allowing the case to go to trial.

But the youth behind the lawsuit have pushed back on the Justice Department's repeated attempts to have the case dismissed or put on hold, accusing the government of seeking to deny them their right to be heard in court.

"This administration is so afraid of being held accountable. It believes itself above standard court proceedings," 18-year-old-plaintiff Aji Piper said in a statement issued Thursday. " If the United States Supreme Court allows the federal branch of government to act in this manner, stops this case and denies us our right as young people to be heard in a court of law, the institutional legitimacy of this highest court will be harmed. At this moment in our country's history when we are so divided, it is more important than ever that the judicial branch of our government maintains the trust and respect of the American public."