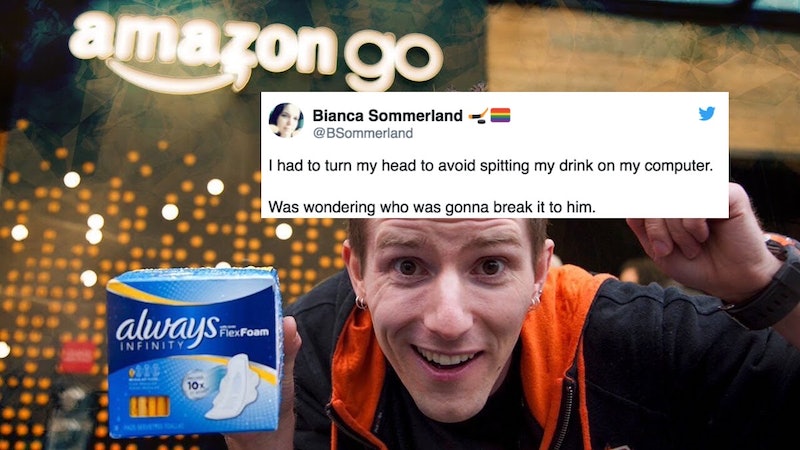 Everyone's been talking about Seattle's Amazon Go store lately — the brand spankin' new cashier-less store from the mega online marketplace. It's so intriguing that people are coming from out of the country to experience the magic. Such was the case for Canadian YouTuber Linus Sebastian. His whole schtick was that he was going to buy feminine hygiene products for his menstruating significant other, except there was one giant problem: Sebastian appeared to not know the difference between pads and tampons. If you hear something weird, it's probably the sound of millions of women around the world facepalming.

Let's back up for a moment. Here's the oh-so-hilarious story Sebastian told on camera, which was then shared on The Daily Dot. His wife got her period, and Sebastian needed to go to the store and pick up "bio waste management products," a term that makes pads and tampons sound way cooler than they really are. However, Sebastian didn't want to go to any ordinary store to pick them up and face what he seemed to think would be an awkward conversation with the cashier once they realized he was buying tampons. Because life is really hard for men with menstruating wives, he instead drove two and a half hours to Amazon Go, all so he could buy his damn tampons in peace. On camera. In front of millions of viewers.

(Note: all jokes aside, it is cool of men to normalize buying menstrual products for the women in their lives; it'd be cooler if the kind of stigma around purchasing them didn't exist in the first place, so going all the way to a cashier-less store to buy them didn't have to the a "thing".)

Sebastian travels alllllll the way to Amazon Go specifically to pick up tampons, except he gets pads and doesn't realize THEY'RE NOT THE SAME THING. The word "tampons" is even in the title of the video, but... but... but... I see no tampons here. Sebastian was worried about going back to his wife empty-handed, not knowing showing up with pads when she specifically requested tampons is a far worse offense. Why didn't you just buy her a diaper? I'M PERSONALLY OFFENDED.

So were some women on internet. Sebastian shared his otherwise pretty cool video with the Twitterverse, and they had some thoughts about it.

It was bad enough that no one even mentioned how Amazon Go ruined a perfectly acceptable BLT sandwich by adding kale, which... I seriously can't even get into that right now.

The ~uproar~ was so serious, Sebastian addressed it in another video. He confirmed he does indeed know the difference between a pad and tampon, but there were two matters which caused his mix-up. First, he claimed the packaging was misleading and doesn't make it clear whether it's a pad or a tampon (interesting, considering the packaging pictures a PAD and literally says PADS on the front).

Secondly, he said filming these videos takes enough attention and concentration that he can't be too concerned with things like which feminine hygiene product he picks up because it's a "minor detail." (Tell that to anyone with a period, though, and they might disagree.)

Excuses, excuses. But hear him out: he explains his perspective and even shoves a pad in his mouth to prove he's not embarrassed by handling them. No, really.

Also, Sebastian clarified his wife was not sitting on the toilet waiting for him to return bearing tampons while he filmed his video. See his full explanation below.

Alright, Linus. You're off the hook this time. While there are zero excuses to ever mixing up pad and tampons (seriously, it says it right on the packaging, man...), anyone can understand maybe you were so distraught by the bacon kale lettuce tomato sandwich that you just totally lost your focus. Also, you're human. So, everyone can relax a little. Linus Sebastian knows what a tampon is — and when a video like this goes viral, a few more flummoxed people in the world do, too.