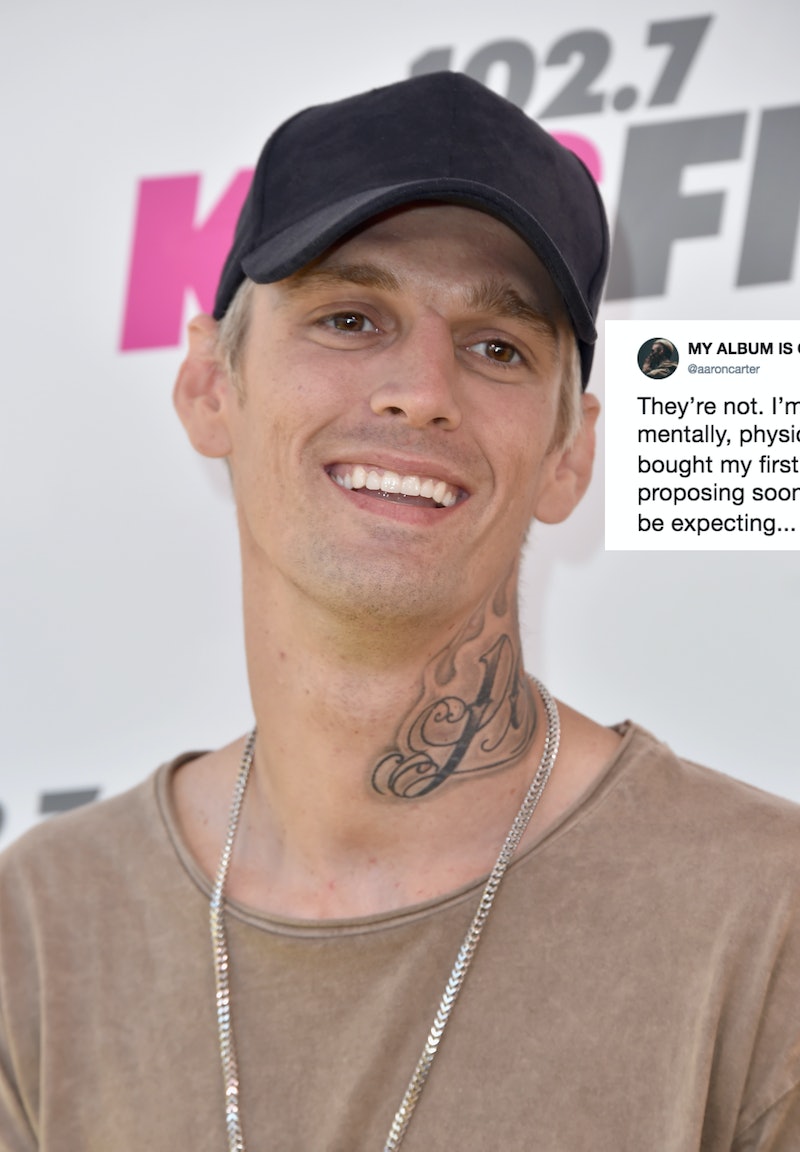 It feels like it was just yesterday that everyone was bopping along to "Aaron's Party (Come Get It)" by Aaron Carter. Now, the pop singer really has a reason to throw a party. Aaron Carter hinted that he's expecting his first child with his girlfriend Lina Valentina, according to one of his recent tweets. The "Candy" singer posted on Tuesday,

"I’m in such an amazing place mentally, physically & emotionally. I finally bought my first home and I’m going to be proposing soon to my gf and we might just be expecting..."

That's not a firm confirmation, but considering that no one was even asking about the possibility of a pregnancy, it sure does seem like they have a baby on the way. (Bustle reached out to Carter's assistant for comment, but did not receive an immediate response.)

On the same day, Carter also tweeted, "Soooo happy I have the most beautiful woman by my side who understands me and we are very excited to start our family together," which also indicates that there's a baby on the way.

Plus, an unnamed source confirmed the pregnancy to E! News. The source said, "Aaron could be proposing to Lina within the next week." Considering he announced he would "be proposing soon," that makes sense. At this point, it seems like Carter might just post about the proposal moments before he drops down on one knee with a ring in his hand. He's very open with his fans on Twitter these days.

The "That's How I Beat Shaq" singer strongly hinted about a baby on the way. Multiple times. Some disgruntled "fans" went in on the singer for a canceled show. This prompted Carter to go on the defensive. Then some of his fans rallied to his side with their own tweets.

In response to one of his actual supporters, Carter tweeted, "We have a beautiful home and some VERY exciting news to share soon." Did he share it already? Technically not. This (supposed) pregnancy announcement is really getting dragged out, isn't it?

In an even more vague announcement, Carter told one of his fans, "I have a lot to look forward to in the next year." It sure seems like something he's looking forward to is a new baby. Well, and that proposal that he announced, but hasn't actually done yet.

Even though the singer merely hinted at a pregnancy, his fans still jumped on Twitter to congratulate him and Lina about the possible news.

Of course, there were plenty of fans that used Carter's own lyrics as inspiration for their tweets about the potential pregnancy.

Other fans told him, "don't let the negative people get to you" in a congratulatory tweet.

Some fans were so pumped about the news that they even brainstormed some baby name suggestions for the couple.

Most fans were happy about the notion of Carter embarking on the journey of fatherhood. Others couldn't help being a little sad that their celebrity crush might have a child on the way.

Of course there were plenty of friends that shared in Carter and Valentina's happiness.

Even though the news isn't actually official, one thing is for sure: Carter is excited about the idea of fatherhood. Hopefully he will confirm the pregnancy in the near future.