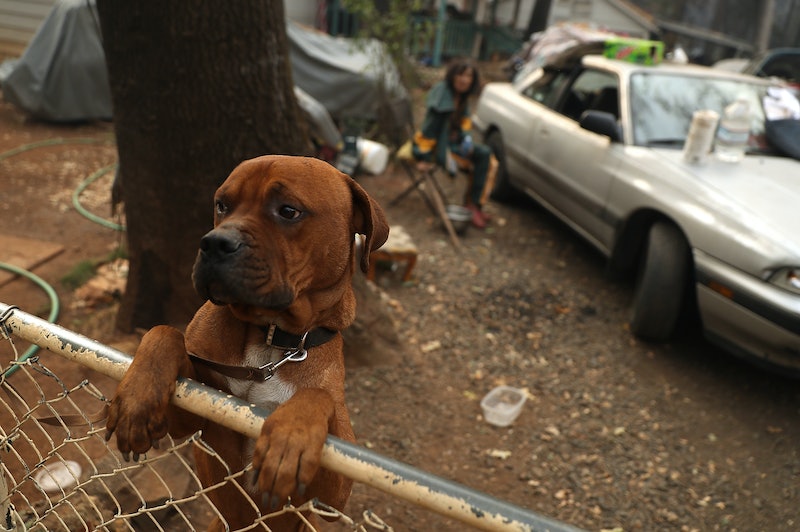 With the help of Senate Bill 1783, dogs in the Sunshine State might soon get more protection during extreme weather and other volatile conditions. The Florida bill would outlaw abandoning dogs during hurricanes and other natural and manmade disasters, The Hill reported on Wednesday.

This piece of legislation was first introduced by the Florida Republican Sen. Joe Gruters earlier in March, and it passed the state's Agriculture Committee on Monday. It is now headed to the state Senate Criminal Justice Committee, per The Hill, which is responsible for reviewing the bill. On Monday, The Palm Beach Post reported that Gruters told the press: "We want to give these dogs a fighting chance."

The official text for the bill states: "A person who leaves a dog outside and unattended by use of a restraint during a manmade disaster or a natural disaster commits animal cruelty, a misdemeanor of the first degree."

The bill may provide some much-needed protection for dogs during natural disasters. Parts of Florida are frequently pummelled by ferocious hurricanes; there was Hurricane Michael in 2018, Hurricane Irma and Maria in 2017, Hurricane Matthew in 2016, and more.

In 2017, USA Today reported that "dozens of dogs" were abandoned when Irma hit the state. The Palm Beach County Animal Care and Control director Dianne Suave told the publication that they rescued 40 dogs before the hurricane made landfall. "There is absolutely no excuse for doing that," Suave told the outlet.

Unfortunately, pets are far too often left behind when natural and manmade disasters hit areas. In other states like California, where wildfires ravaged parts of the region in 2018, dozens of dogs and other domestic animals were left behind. KCCI reported that a local volunteer group had made efforts to rescue some 500 dogs whose owners were not able to take them along as the deadly fires consumed swaths of the Golden State.

With SB 1738, other states may feel inspired to introduce legislation that would give vulnerable animals, including dogs, shelter and protection in devastating circumstances. Especially in the case of hurricanes, these dogs may have a chance to survive horrifying weather conditions.

As Suave noted to USA Today in 2017, pet owners need to show more consideration for their animals in these extreme weather events. "These are things that are not unexpected during a situation like this," Suave told the publication back then. "It's always disappointing. Our goal is to keep pets and people together."

It may or may not become state law but the Florida bill could still spark a nationwide conversation about pet ownership and safety. Dog owners can remember to take small but effective steps to keep their furry friends out of harm's way during a hurricane or a manmade disaster.

In 2017, Suave shared one of those tips with USA Today. Her advice was to be proactive in such unpredictable times and make sure that your dog was already inside your home before the calamity hits. If SB 1738 becomes law, Floridians who fail to show such care for their dogs may face hefty fines of up to $5,000, according to the bill's text.