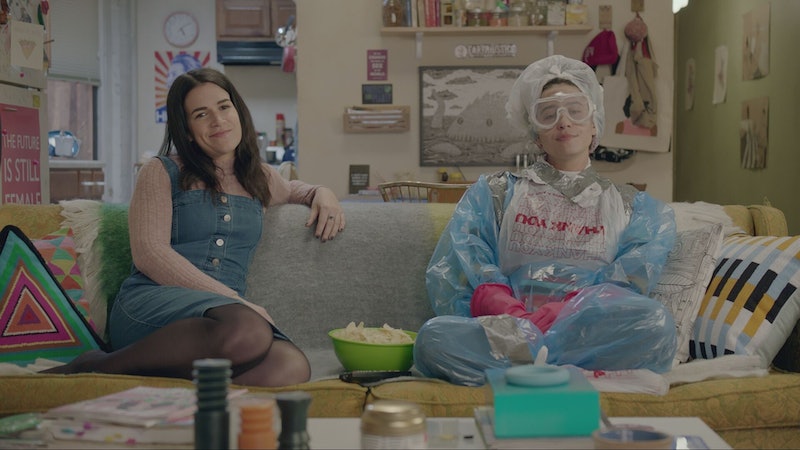 Throughout five seasons of Broad City, its two protagonists have grown from aimless 20-somethings into ambitious, politically engaged women. It seems only natural, then, that their apartments would be reflective of that change. Abbi and Ilana's apartments have always been realistic to who they are: initially, two broke millennials living in New York, now two slightly older, semi-less broke millennials. But according to Broad City production designer Angelique Clark, Abbi and Ilana's homes have evolved with them along the way.

For Clark, who has worked on the show for five years and within the TV industry for over a decade, it's been a relatable effort. "I came to New York with no money, no plan, and I kind of just worked my way up," she tells Bustle, adding that she began by waitressing and scouring for jobs online. "The beauty about Broad City, to be honest, is that... we're showing the raw gritty realness of New York. It's so easy for me to be like, 'Oh yeah, that was my apartment when I was 25!'"

For instance, Clark remembers decorating her apartment in a DIY style similar to Abbi and Ilana's. "I didn't have a ton of money, but I remember taking tissue paper that had flowers on them, cutting them out, and putting them on the wall and [making] a little collage," she recalls. Always the artist, Abbi similarly loves showcasing her work, while Ilana, like Clark, prefers a good collage (more on that later).

So though Abbi's apartment is twee and well-furnished (despite Bevers' best efforts) while Ilana's is messy, their apartments have both evolved over the years — just like them. Here's how Clark and her talented team made the whole thing feel seamless.

"[Abbi has] such a put-together, refined, modest aesthetic, and it's so well-curated," Clark says. "We showed her changes through her artwork, which changed a bunch, and we would constantly add more artwork throughout the season."

The most prominent example of this is Abbi's iconic Oprah portrait, which hung proudly above her bed until Season 4. "After talking to [co-creator and star Abbi Jacobson], she was like, 'I think I'm ready to retire Oprah,' so that came straight from her," Clark explains. Instead, Abbi swapped it out for her own handiwork: an ombré, string wall hanging that's now displayed over her bed. "It was like a work-in-progress type thing that she put up, and...throughout the season, she progressively filled in more and more of the artwork," Clark says.

It's not that Abbi will ever not love Oprah, but it shows that she's ready to be her own person and take pride in her work. "It's more of just showing the growth of her character and just wanting to have her own piece," Clark says. That said, a smaller photo of the TV personality still hangs near Abbi's door, and of course, she'll always have her lower back tattoo. "Oprah definitely lives on for Abbi in her life," Clark assures.

The production designer adds that Season 4 was all about Abbi switching things up. She gets a big girl job — albeit briefly — so she upgrades some of her furniture, and even rearranges her bedroom and living room to make things feel fresh. Her sofa, for instance, moves from back against the wall to facing the window, which makes it look like an entirely new apartment.

As for where Clark and her team shopped for Abbi's room, she cites obvious stores like Bed, Bath & Beyond (of course), Anthropologie, and Urban Outfitters, as well as more New York-specific places like a Cobble Hill paper store called Papel New York, an Astoria chain called Lockwood, and Housing Works. "In between seasons, I just kept lists of things that I think Abbi and Ilana... would have, and I would just be like, 'OK, we have to get this,'" Clark recalls. She also works closely with Broad City set decorator Jessica Petruccelli, who Clark says "was responsible for so much of the set décor."

"Ilana's apartment started off like a boy's dorm room, almost," Clark remembers of Season 1, saying that the character's furniture was likely junk that Ilana or her roommate, Jaime, got off the sidewalk. "I think in my initial conversations with [co-creator and star Ilana Glazer], we came upon the conclusion that we really just wanted to show the real gritty, scrappy, 20s type of living that you do when you're trying to make it in New York, and you're just basically struggling from paycheck to paycheck."

Clark notes that while they considered painting the apartment, they decided to keep it as "sad as possible" and left the walls a plain, dirty white. Furthermore, they didn't include much art or decoration at first, since Ilana and Jaime were too preoccupied with partying to worry about interior design. It's a familiar setting for many young New Yorkers, who split the rent with several roommates and have an eclectic shared living space. "I feel like I did live in an apartment like that at one point, for sure," Clark says. "And then, through the course of the seasons, we see old junk getting thrown out and new junk coming in."

However, Season 4 ushered in a strong political theme for Broad City. Ilana and Abbi have always been informed, but Donald Trump's election caused the show to address politics much more explicitly. And since Ilana has her political awakening in Season 4 (quite literally, if you remember the orgasm episode), this was likewise reflected in her apartment. "That's when basically she's like, 'I need to get my sh*t together,'" Clark explains. "And we wanted to show that by the collages on her walls change. They became women, they became women of color."

Collages, as mentioned before, are a huge part of Ilana's design aesthetic. Clark explains that Ilana has a spread of musicians in her bedroom, which becomes something of her vision board and features artists like Rihanna and Nicki Minaj. Furthermore, in the Episode 4 premiere, "Sliding Doors," we're granted a glimpse of her 2011 apartment, which featured a pornography collage over her bed.

And since this artwork is supposed to be done by Ilana, Clark does it all by hand. "It's so much easier because I know exactly what I want it to look like, and it's hard to relay that to a set dresser," she explains. So yes, she made Ilana's porno collage, which she recalls taking a selfie with, since her risqué handiwork was almost all blurred out onscreen. "It takes hours," Clark says of the collage process. "It takes a really, really long time." However, she credits other members of the team for printing everything out for her, which helps to speed things along.

Another piece of DIY decor is Ilana's headboard, which is comprised of political posters — another craft Clark did herself. But that's not the only place Ilana has posters, which are placed seemingly at random around her apartment. "We just solicited a bunch of different organizations to send us [as many posters] as possible," Clark says, adding that the art team designed some of the posters themselves. "We asked artists to do stuff for us, and then [artist] Mike Perry and a bunch of his friends sent us political protest signs and art." Perry, it should be noted, designed Broad City's intros, as well as illustrated the animated Season 4 episode in which Abbi and Ilana do mushrooms.

On top of everything, Clark always paid special attention to what was feasible for Abbi and Ilana's budgets. Abbi's not loaded, but she's always had a steady income, which is reflected in her home. Ilana, on the other hand, is often broke and spends money erratically, but when she gets that waitressing job in Season 4, she has money for the first time. "So that's when some of her furniture got changed out," Clark explains. "And it was still funky, but it was very Ilana — which is just different." Clark says that they shopped for Ilana at 99 cent stores around New York, the Container Store, Urban Outfitters, Big Reuse (formerly Build It Green), Otherwild, Fredericks and Mae, and City Opera Thrift, among others.

All of this attention to detail and gradual set evolution gives Broad City the authentic quality that its fans love so much. And since there's still half a season for these two beloved characters to evolve, who knows what other changes will come along in the coming episodes.