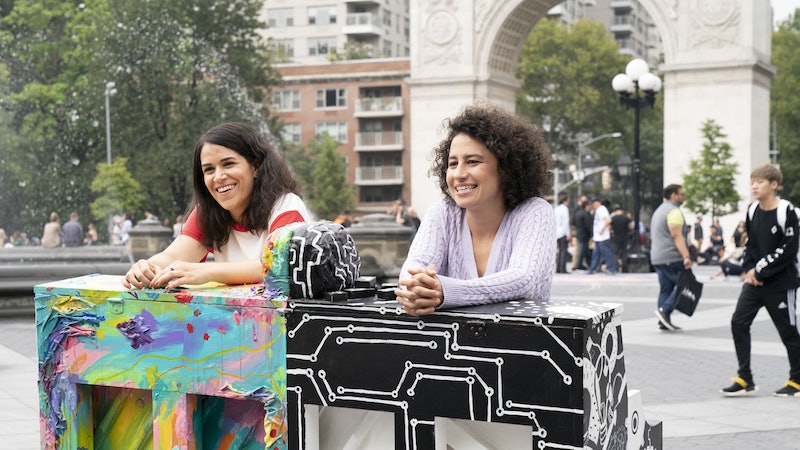 If there's one thing we can all count on in this crazy world, it's that Broad City will always make us laugh. Even in Broad City's final season, as Ilana Glazer and Abbi Jacobson's fictional versions of themselves grow up, leave their 20s behind, and tackle all the myriad life milestones and issues that brings, there's still so much comedy packed into each episode. So why are the creators and stars calling the series finale "devastating," and why can't they stop crying about it?

When Bustle sat down with Glazer and Jacobson at Comedy Central's Los Angeles offices, the conversation naturally steered towards the upcoming series finale. But instead of displaying the usual high-energy excitement the women are known for, they started tearing up.

"I'm like, about to cry. I'm verklempt," Glazer says, laughing. She takes a big sigh. "When the credits roll, and it's that last shot, I want people to feel inspired and excited to live."

"And that they're a part of it, that they've been a part of this whole experience," Jacobson adds, before smiling big as her own eyes start to water. "I almost cried just saying that because I just realized that that's what we're trying to say in that moment."

Jacobson and Glazer are having a moment, looking into each others' eyes as they think about the series finale as if they're the only two people in the room. And honestly, they might as well be. This is a moment of pure love and pride for the work they've created together over a decade — from the show's humble beginnings as a web series through its transformation into a full-length show with multiple seasons on Comedy Central.

"We always thought we were really funny and we knew we were smart, but I don't think we ever thought that this would happen."

"It's meta too, because it — ugh, I'm seriously like about to cry, but I'm not gonna! I'm not gonna — because even for us, this show doesn't exist without all the fans that watch it," Jacobson says. "This has been an incredible 10 years of our lives. It's nuts. We always thought we were really funny and we knew we were smart, but I don't think we ever thought that this would happen."

Both women get excited again at the thought of fans who have been around from the very beginning of the series finally getting to see the last episode. "I think it's going to be good and I think it's going to be devastating," Glazer says. "For us, it's this huge moment in our lives as private human beings, but I also feel like there are these moments in life where something is two extremes at the same time and it's agonizing inside but it's like, because it's a rich moment, it's not some two-dimensional thing."

In a perfect world for fans, Broad City could go on forever. But with the actors' complicated schedules full of other projects, it's understandable why the series is ending. What's surprising, however, is that both Glazer and Jacobson say their career growth is not the reason why the show is ending after this season.

While they recognize that the show has led to more creative opportunities, Jacobson emphasizes that ending the show was never about pursuing other projects. "I think it's always been [about] creatively honoring Broad City and keeping it as the best, keeping the potency of Broad City as dense as it could be," she says. "Broad City is meant to be five seasons. It kind of always has been."

"It's always been creatively the story of these characters," Glazer adds of the fictionalized versions of themselves. "These characters are like our babies, they're like our inner children. That is what I feel in the end; I'm excited for these characters as though they're real people. It's bizarre. It's such a bizarre meta thing. They're not us, but they're us."

She laughs, then continues, "Ilana Wexler is a person that's not Ilana Glazer, and I want her to grow up in the way that she wants to grow up." Jacobson smiles and agrees, adding, "We're helping them figure out who they really are. It's nuts."

The laughter has been going nonstop for the past few minutes, but Jacobson abruptly stops and silently sends Glazer a message with her eyes. She's started to tear up again, and explains where her mind just jumped to.

"Another thing that I just thought about for the first time ever is that because the show has been airing and it's been on, this will always be in the world," she says to Glazer. "It will always be there. You'll be able to watch this forever. That's pretty cool."

When told that Broad City is a lot of people's go-to show to rewatch over and over again, Glazer smiles. "It's actually starting to be my go-to," she says. "I haven't been able to watch it outside of editing it and it airing, and I've recently started watching it and I'm like, 'This is my favorite f*cking show.'" She then cups her hand over her mouth to shout, "It's my favorite f*cking showww!"

It's clear that after a decade, she's not alone in thinking that. And soon we'll all have to say goodbye to Broad City together.