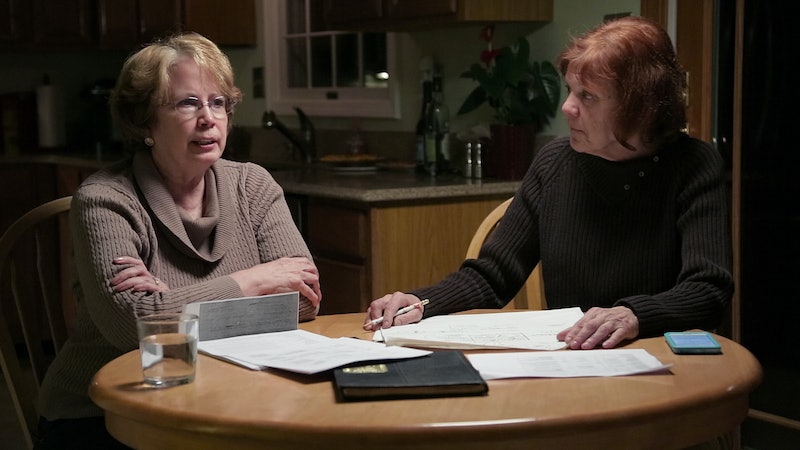 It’s not always easy to be brave, but sometimes, circumstances in life necessitate that one must be. Such is the case of Abbie Schaub and Gemma Hoskins in The Keepers. Both women would have had it easier to just sit back, relax, and live the rest of their lives without making note of what happened to their teacher, Sister Cathy Cesnik, in 1969. But these two women thought that Cesnik’s murder needed to be investigated and that justice needed to be served, and so they teamed up. In times of darkness, it’s necessary to push through and fight for what's right, and Abbie and Gemma are heroes for our time.

In the late 1960s, Hoskins and Schaub (then known by their maiden names) were classmates at Archbishop Keough, a high school in the Baltimore Archdiocese, and both loved Sister Cathy Cesnik, a young nun that taught English and Drama at the school. Cesnik was in her 20s when she was teaching at the school, and that made her a favorite of her pupils. She was young, relatable, fun, a good listener, and the students flocked to her. That made her 1969 murder especially devastating to the community. According to Huffington Post, Cesnik had gone out one Friday night in 1969 to get her sister an engagement present, and she never came back. Her car was found empty, parked near her apartment a few hours later, and her bludgeoned body was found in a marshy area a few months after that in 1970. No one was ever charged in her murder.

Hoskins and Schaub graduated from Keough, got married, and lived full lives, but something kept bringing them back to Cesnik and her tragic fate, and in recent years they began to piece the story together to get to the truth.

In The Keepers, both Hoskins and Schaub talk about how well-suited the other is to their investigation. Hoskins can talk to anyone, and from what you see on the series, people seem to like to tell her things. She’s inviting, but she always knows what she wants to get out of a conversation. Schaub is an immaculate record keeper, and her research and reporting drive the other side of their investigation engine.

Adding to the complicated case, in 1994, Jean Wehner and Teresa Lancaster, two former students at Keough, came forward with allegations that Father Joseph Maskell, the head counselor and priest at Keough, had allegedly sexually abused many students during his time at the school over two decades prior. (According to the Baltimore Sun, Maskell denied the accusations until his death in 2001.) Wehner claimed that Cesnik knew about the alleged abuse and was about to go to authorities before she was murdered in 1969. Wehner also claimed that Maskell took her to see Cesnik’s body a few days after she went missing and allegedly told her, “You see what happens when you say bad things about people?” The Archdiocese of Baltimore's website states that "when suspicions arose regarding Maskell in 1994, he was interviewed by the Police and also by The Baltimore Sun about the allegations of sexual abuse and also about the murder of Sr. Cathy." But Maskell was never charged in connection to Cesnik's death or with the abuse accusations. But the Archdiocese did acknowledge the allegations of abuse against Maskell in this statement to Bustle.

Hoskins and Schaub theorize that Maskell initially got away with his alleged crimes because of his ties with the police and government officials in the city of Baltimore — so they are doing their own investigating. In response to the implied theory in the series that the Baltimore County Police Department allegedly didn't do enough in regards to the murder and sexual abuse accusations, a spokesperson for the BCoPD issued this statement to Bustle:

"We have not been afforded the opportunity to preview the series and therefore cannot comment on it. We have been aware for some time of vague allegations of wrongdoing by police in connection with the murder of Sister Cathy Cesnik. In the nearly 50 years since this murder occurred, no one has come forward to BCoPD to initiate an investigation of wrongdoing by police officers, including a woman who came forward through her attorney last week to allege abuse by a now-deceased BCoPD officer. Our detectives contacted her to begin an investigation, and she refused to be interviewed. This has been one of our most active cold cases for many years; our current team of detectives continues to work diligently to solve this case."

Also working diligently to solve the case are Hoskins and Schaub who want justice for Cesnik and Maskell's alleged victims, and they’re going to get it no matter how long it takes or how many road blocks they come up against.

I think we are seeing a lot of this “I’ll get it done myself” attitude in today’s world, especially in today’s political culture. In an era of fake news, people who are driven to get down to the truth — and I mean actual truths, not just something manufactured to sound good — are especially important. Schaub and Hoskins could be putting themselves in danger by asking too many questions and snooping around, but they don’t care. Change happens when people are talking about things and refusing to be silenced. Hoskins and Schaub are doing what they can to bring 50-year-old secrets into the light, and people like them are needed now more than ever.