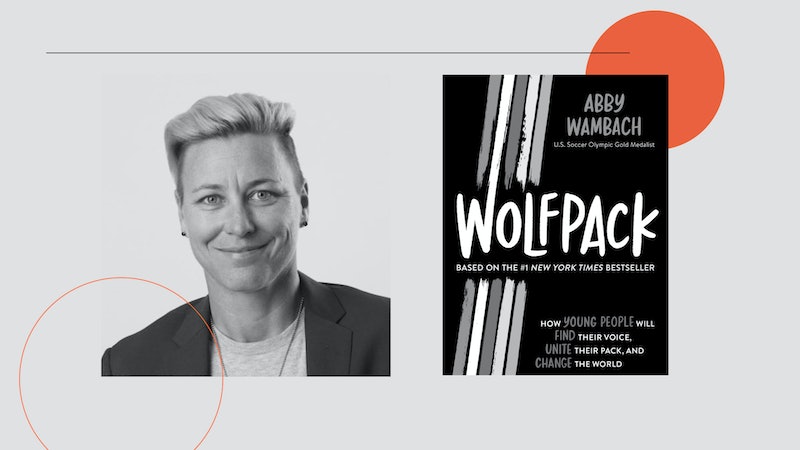 Last year, FIFA World Cup Champion and Olympic Gold Medalist Abby Wambach published Wolfpack: How to Come Together, Unleash Our Power, and Change the Game, and now she's releasing a new edition for young readers. Out in October, Wolfpack: How Young People Will Find Their Voice, Unite Their Pack, and Change the World operates on a singular premise. "Young people — united together in passion and purpose — will change the world by creating New Rules," Wambach tells Bustle. "Leading from wherever they are, challenging the status quo, and empowering their Pack to do the same."

Wolfpack is all about failing upward and encouraging other women to do so as well. At a time when girls and young women are encouraged to look at each other as rivals, it provides a much-needed dose of reality.

"At the most basic level, we need to know that scarcity is a lie," Wambach says. "That power and success and joy are not pies — a bigger slice for one woman doesn’t mean a smaller slice for another. They are infinite and can be meant for all of us."

Check out Bustle's exclusive excerpt below, and pick up your copy when Wolfpack comes out on Oct. 6.

Excerpt from Wolfpack, exclusive to Bustle

When I was on the youth national team and dreaming of one day playing alongside the legendary soccer star Mia Hamm, I had the opportunity to visit the locker room of the U.S. Women’s National Team. Time stopped for me as I looked around and tried to memorize everything I saw: my heroes’ grass-stained cleats, their names and numbers hanging above their lockers, their uniforms folded neatly on their chairs.

But the image that stayed with me forever was something else entirely.

What I remember most vividly is a five-by-seven photograph.

Someone had taped this small picture next to the door so it would be the last thing every player saw before she headed out to the training field.

Five years later, I was called up to that national team. One day we were on the road with nothing to do but sit around a big table in the dining hall and pass around stories for hours. I mustered up the courage to ask about that picture. I needed to know what it meant to them, so I asked:

“Hey, what was the deal with the picture you kept on the locker room wall of the Norwegian team? Why did you want that to be the last thing you looked at before you went out to play?”

They smiled, and it became clear to me that they’d been waiting for the rookie to start asking the right questions. They began to explain to me that the first order of national-team business is to win. But that when failure does come, the team isn’t afraid of it; the team is fueled by it. The team never denies its last failure. We don’t reject it. We don’t accept it as proof that we aren’t worthy of playing at the highest level. Instead, we insist upon remembering. Because we know that the lessons of yesterday’s loss become the fuel for tomorrow’s win.

I asked, “Do you think putting that picture up worked?”

Our captain at the time, Julie Foudy, said, “Well, we brought home our first Olympic gold the following year. What do you think?”

I left that table understanding that in order to become a champion—on and off the field—I’d need to spend my life transforming my failures into my fuel.

When I was a young player, I had a lot of raw talent, and was starting to accumulate major trophies and awards. One year I was selected to play at a special training camp where we got to scrimmage against professional players. After the game the head coach called me into his office. I figured he wanted to praise me for scoring the most goals. Maybe he wanted to move me up to a higher level.

Instead, he said that I just wasn’t good enough yet. He listed specifics where I had fallen short. And he said that since I wasn’t trying hard enough to improve my game, my teammates couldn’t count on me. He wasn’t going to take the risk. He cut me from the next camp.

I fumed silently as I walked out the door. How could he? I felt defensive and devastated, like I’d been punched in the gut. His criticism knocked the wind out of me. But as I let his words roll around in my head for the next month I realized he was right.

This was the first time in my life I had truly failed at soccer — and I had a decision to make. I had to decide whether I would accept what the coach said to me as the end or the beginning. As a rejection or a challenge. I decided to make myself vulnerable. To try again and try harder. So I wrote him an email saying that I understood his criticism, and would work harder than ever on the things he told me to work on. At the end of the email, I asked him to give me another chance.

He responded immediately: “That’s exactly what I wanted to hear.”

When we feel powerless in the face of failure, it’s hard to remember that failure offers us a choice. We still have so much power, because we decide what we do next.

Will you disappoint your parents? Will you underperform in school? Will you be left off the roster, lose the class election, fall short of a goal you set for yourself? Of course you will! Everyone fails. But only the wise know how to turn failure into their fuel.

Abby Wambach's Wolfpack: How Young People Will Find Their Voice, Unite Their Pack, and Change the World is out on Oct. 6 from Roaring Brook Press and is available for pre-order today.