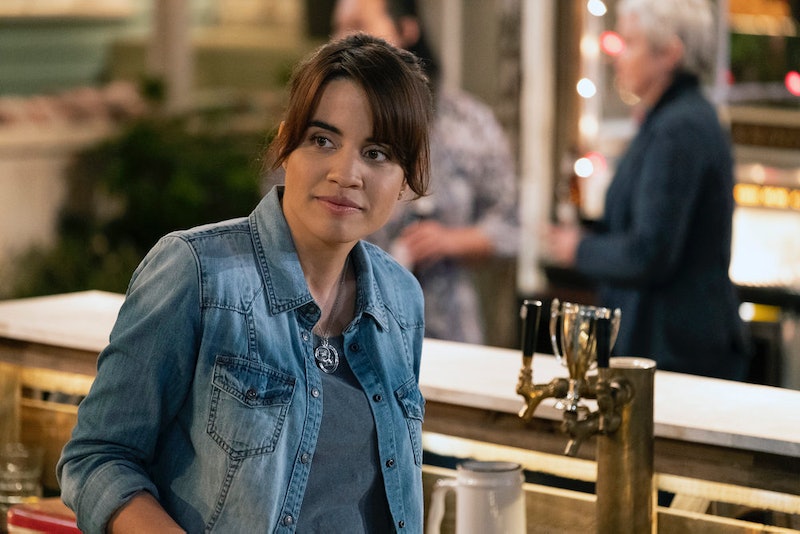 NBC's new sitcom, Abby's, centers around an unlicensed bar in the titular character's backyard. It operates by a specific set of rules — there are no cell phones, and you have to, quite literally, earn your seat at the table — but it's overall a welcoming water hole for locals to escape the daily grind and bond over a couple of drinks. And though Abby's isn't based on a real bar — considering the whole operation is technically illegal, it'd be kind of a bad idea to publicize it even if it were — the writers did take some inspiration from real life.

According to the New York Times, Abby's creator Josh Malmuth was directly inspired by New Orleans wine bar Bacchanal, which features a large outdoor patio adorned with string lighting, a stage for musicians and other performers, and two stories of indoor and outdoor seating with a variety of drink specials. The Abby's bar isn't that elaborate, but it does tie into a recent trend. Apparently, several people have begun installing makeshift bars in their backyards to entertain guests. The only difference is that they're just for fun, and not legitimate businesses where money is changing hands, so they're on the up and up.

As an NBC News headline proclaimed in 2016, "The Speakeasy Is Back, and It's In Your Neighbor's Backyard." The article describes the backyard shed-turned-speakeasy of Gio Gutierrez, a man who posts drink menus online for his invite-only backyard bar, as well as others who turned garages, dining rooms, and other hardly-used spaces on their property into makeshift watering holes. One woman interviewed, named Rachel Mae Furman, had even managed to turn the art of home bartending into a full-time gig, and started working as a consultant for others looking to set up their own at-home bars.

That the Abby's bar is outdoors is a core element of the show. As reported in the aforementioned Times article, the series is the first ever multi-cam sitcom to turn a real house's backyard into the outdoor equivalent of a sitcom studio, complete with an audience of people watching live and providing a laugh track. "You see the audience; you see that we're, like, literally on the side of a cliff in Universal Studios; you see the Los Angeles city lights; and then you see us on this weird little outdoor set, acting," actress Natalie Morales, who plays Abby, told the outlet, explaining what viewers at home will see during some of the behind-the-scenes shots featured in episodes of the show.

That the show is open about the fact that it's a performance for a live audience harkens back to a sitcom it's already drawn a lot of comparisons to — Cheers — but moving the setting outside provides a friendly, laidback vive fitting for its story. It may not be Bacchanal exactly, but it does capture the spirit of being there, at a backyard speakeasy, or at any other relaxed drinking spot you can think of.

More like this
The 'Reasonable Doubt' Cast Includes A 'Save The Last Dance' Reunion
By Grace Wehniainen
Is The Serpent Queen Based On A True Story?
By Maxine Harrison
Paul Mescal, Man Of Mystery
By Samantha Leach and Heather Hazzan
Mike Flanagan Teases 'The Midnight Club' In This Exclusive, Creepy Clip
By Grace Wehniainen
Get Even More From Bustle — Sign Up For The Newsletter