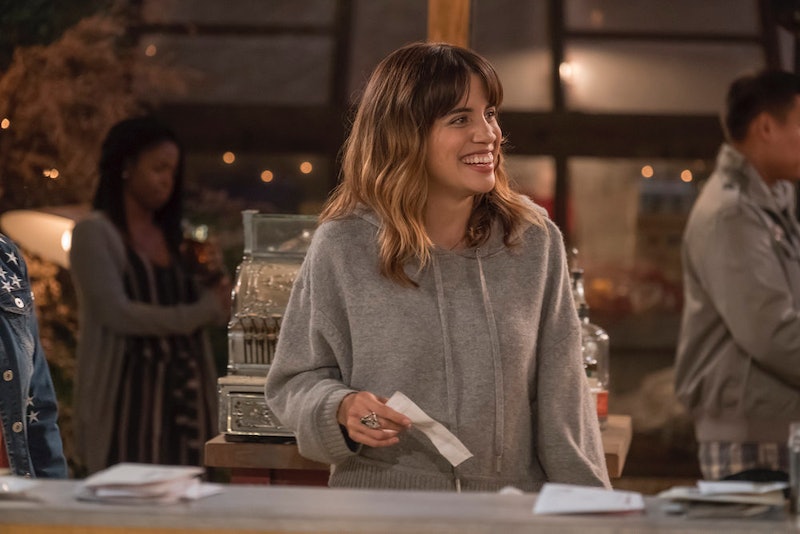 Having boasted showrunners from high-profile projects like The Good Place and How I Met Your Mother, NBC's cancellation of Abby's after one season is somewhat unexpected. According to TVLine, The Good Place creator Mike Schur was an executive producer and How I Met Your Mother's Pamela Fryman directed the pilot. Unfortunately, their experience couldn't keep the 30-minute sitcom afloat.

According to Variety, it was the first NBC sitcom to film outdoors in front of a live audience, rather than staging an outdoor backdrop in studio. The scenery brought Abby's to life — a makeshift bar that the main character of the same name ran out of her San Diego backyard.

Along with its Cheers-inspired setting, the show accomplished another milestone by casting Parks & Rec's Natalie Morales as the titular character — she was the first Cuban female to lead in the format, per Variety. “If I could get any kind of comparison to Cheers or Ted Danson— why would you complain about that?” Schur told The Los Angeles Times ahead of the show's premiere. Sadly, it wasn't given enough time to outlive the local bar trope.

The creators tried to set the show apart by including their live audience in unique ways that broke television's fourth wall. Although, technically, there were no walls on set to begin with. “The way we’ve edited the show so far, we’ve shot these big, wide crane shots where we show the lights and the crowd and everything,” Schur said. "It is breaking the reality that we’re purporting for the show, but also we kind of feel like that’s what makes this cool. At least for the first season we want to constantly remind people ‘This is real, we’re in front of an audience.’” But the first season will be its last.

Bar-owner Abby was a military veteran who opened her backyard bar after returning home from active duty and deciding the mainstream service industry wasn't for her. So, she created her own gig and gave people a place to drink inexpensively and laugh abundantly. However, she wouldn't just serve anyone. Her regular customers earned their seats at the bar and, because of that, wouldn't trade them for the world — even if that meant they couldn't be on their cell phones.

As of May 30, according to Variety, the program averaged 1.7 million total live viewers and a 0.42 rating in the age 18-49 demographic, making it the lowest rated of all the network's sitcoms and 19th of scripted series. Three other NBC programs, The Village, The Enemy Within, and A.P. Bio were also cancelled this season. Abby's premiered on March 28, and after 13 episodes, will end on June 13.