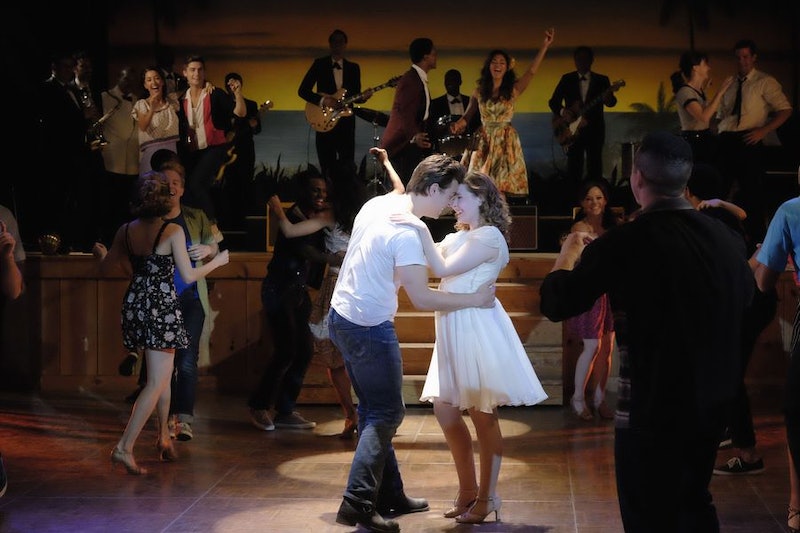 How do you improve on one of the greatest romantic movies of all time? That's not a hypothetical question — if you're ABC, looking to jump into the TV musical trend with an adaptation of Dirty Dancing, you make quite a few changes to the original. The differences between Dirty Dancing and the original movie distinguish the 2017 musical from the 1987 hit.

To adapt the movie into a televised event, there were always going to be some necessary shifts. I mean, the most obvious difference is that Jennifer Grey and the late Patrick Swayze can't lend their signature chemistry to the central roles, so new cast members Abigail Breslin and Colt Prattes will have to give their own spin to Johnny Castle and Baby Houseman.

ABC didn't stop with getting a new cast. There are changes in almost every aspect of this Dirty Dancing retelling. When the network decided to pursue the remake, they decided to add to it too. As Debra Messing, who plays Baby's mother in the movie, told PopSugar: "It's an event film, which means it's longer than the original. There's more meat to the characters." The original film was just an hour and forty minutes, but ABC's version will air over three full hours, with commercials.

Here are the other big changes in store for this reboot of a classic '80s movie:

The biggest change is, of course, that the original Dirty Dancing is not a musical. The music is a huge part of the story, of course. And the climactic dance sequence wouldn't be anything without "(I've Had) The Time Of My Life," the pop song that's now totally synonymous with the movie. But in this version, the characters will actually be singing themselves.

There's More For The Rest Of The Housemans

Baby's family was pretty one-note in the film, and for those purposes, that works fine. She's a bored teen who has always been seen as the — well — baby of her family. But now, Messing as Baby's mother, Bruce Greenwood as her father, and her elder sister Lisa (Sarah Hyland) all get their own storylines.

And That Means No "Hula Hana"

In the original movie, one of the most famous moments is the scene where Baby's sister sings an off-key rendition of the "Hulu Hana." But it looks like in the remake, Lisa is a lot more than a one-dimensional comedic character. Sarah Hyland told Wonderwall, "She goes through so much, and she has this beautiful arc in this film — just as beautiful as Baby's. It's really poignant."

It's Dealing With The Period Setting

Lisa, Baby's sister, will have her own love story with one of the black musicians working at the country club, which takes into account the 1963 setting and the race relations of the time. "There are a lot of controversial things that happen to Lisa," Hyland said in the same Wonderwall interview.

There's A Bigger Role For Penny

Penny, Johnny's dance partner, will have a larger storyline as well. Though, the TV event won't be dumping the story of her unwanted pregnancy and how unhelpful her Ivy League boyfriend is when he hears about it. Shane Harper, who plays Robby, told Hollywood Life, "If you are a girl looking for a good guy, he’s not it. Just because someone is charming or went to a good school doesn’t mean they have your best interest at heart."

There Won't Be Any Cameos

Sadly, Patrick Swayze can't appear in this remake, as he did in the film sequel, Dirty Dancing: Havana Nights. His fellow original star Jennifer Grey turned it down, according to The Hollywood Reporter. "It feels like if you're going to do your own thing, do your own thing," Grey told THR, declining to name what role she was offered.

Even without the blessing of the former's stars, the Dirty Dancing remake is definitely attempting a fresh take on a well-known story.