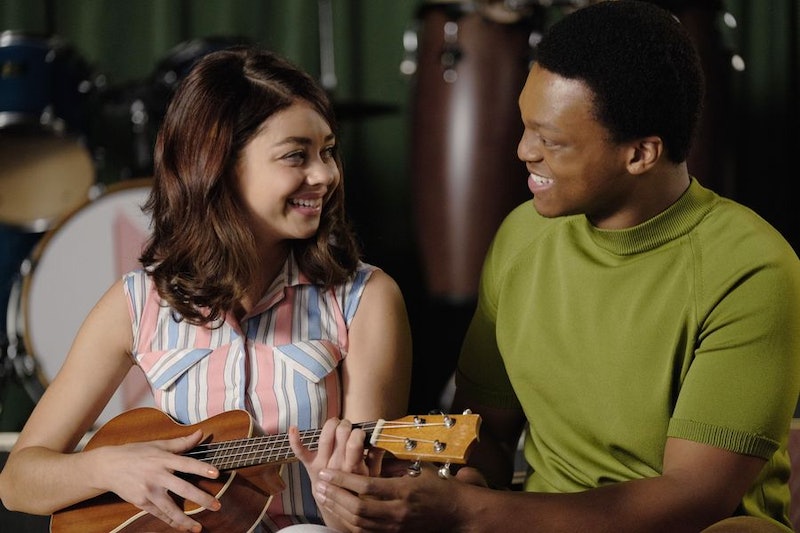 If you've watched the iconic movie, you'll remember the opening. So, it's exciting news that the Dirty Dancing 2017 remake photos appear to suggest Lisa will have a bigger part in the remake than she did in the original film. For those who don't remember, let me refresh your memory. While "Baby" ("everyone called me Baby, and it didn't occur to me to mind") reads a book, her sister Lisa is equally absorbed in her own reflection as she combs her bangs. Her relative superficiality in contrast to Baby established from the get-go, and the film proceeds to mostly treat her dismissively. But, in the remake, the sheer quantity of photos ABC has released that are focused on Lisa suggests she won't be left to wail along with a ukulele about doing the hulu. In fact, there's a chance that she'll be a fully-developed character like Baby.

The remake, which is set to drop on May 24, stars Sarah Hyland in the role of Lisa and perhaps that's part of it. Given the following that she accumulated following her performance as Haley Dunphy in Modern Family, there's no wonder they'd want to give her more screen time.

Then of course there's the running time. At three hours to the original's one hour and 40 minutes, surely developing some of the more lightly sketched characters from the 1987 film is just a logical decision.

Throughout the original movie, Lisa and Baby are placed in opposition to each other. While Baby explores the margins of Kellerman's, a holiday resort in the Catskill Mountains, hanging out with Johnny and the other dancers, Lisa is careful to do what's she supposed to. She dates Robbie, a seemingly nice, wholesome waiter (never mind what we find out about him later), and she joins in with the entertainment provided for her by the resort.

Meanwhile, Baby's sneaking off to learn how to move in a more sultry fashion thanks to her dancing friends. It feels symbolic that, when Baby and Johnny finally stand up to all the people holding them back (Baby's parents, the resort management paying Johnny's wages), they interrupt the hotel staff and Lisa singing onstage to deliver the final dance. Lisa is part of the establishment.

But the photos of Lisa suggest that perhaps she'll be a more nuanced character this movie round, with her entering into a relationship with one of the musicians employed at the resort. There's a sense, from pictures like the one below, that their budding romance will be watched with a degree of caution by the others.

And if it's set in the same year as the original — 1963 — then perhaps this bond might seem more controversial than it would today.

So if you weren't convinced yet about what the TV movie remake has to offer, I suggest you get on board. This time round, we'll have not one, but two heroines to root for.