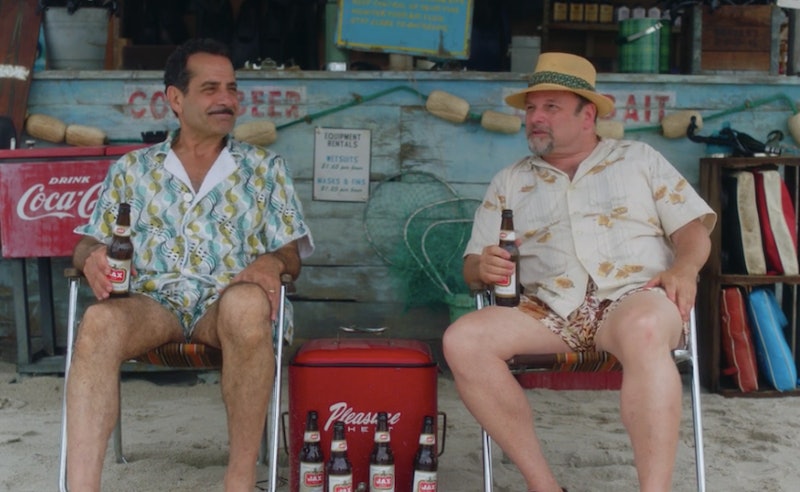 Spoilers ahead for The Marvelous Mrs. Maisel Season 3. While in Miami with Midge during The Marvelous Mrs. Maisel Season 3, Abe reunites with an old college friend turned disgraced playwright named Asher. The character — played by Seinfeld's Jason Alexander — is rather minor, and clearly written in as a means to advance Abe's storyline. After Abe publishes a piece on his pal in the New York Times, The Village Voice offers him a job as their theater critic. However, a quick Google search will tell you that Asher actually seems to be based on a real writer — one with just as controversial of a history IRL.

If you search "Asher playwright 1950s," you'll immediately be faced with a wall of results on a man named Arthur Asher Miller, whose backstory matches Abe's friend's almost perfectly. Miller was a significant figure in the 1940s, '50s, and '60s for a number of reasons. Firstly, he was married to Marilyn Monroe from 1956 to 1961. And secondly, he wrote several Broadway hits, including All My Sons, Death of a Salesman, and The Crucible — the latter of which got him subpoenaed by the House Un-American Activities Committee (HUAC) in 1956, per Politico.

HUAC was a group of U.S. representatives that conducted anti-communist investigations during the Cold War era, and they didn't take kindly to Miller's Crucible, which compared their "Red Scare" efforts to the Salem Witch Trials of 1692. After the play's U.S. opening in 1953, the committee denied Miller a passport to see the play open in Brussels, Belgium.

Miller then testified before HUAC after being subpoenaed, during which time he refused to name alleged communist writers he'd known. As a result, he was found guilty of contempt of Congress, denied a passport, sentenced to jail time, and blacklisted from employment in theater.

This aligns with Asher's story in Marvelous Mrs. Maisel. When Abe asks him if he's still writing after moving from New York to Miami, he gives his head a gruff shake. "You mean since I was blacklisted and my last play closed without opening?” he says. "I gave the theater all I have, and it sent me away. I was one of the most successful playwrights on Broadway. Every one of my shows made money. I won the Pulitzer Prize ... and then one schmuck calls me a communist and poof, over!" (Notably, Miller's Death of a Salesman won the Pulitzer Prize for Drama in 1949.)

But whereas Asher tells Abe he's done writing for good, Miller did, in fact, restart his theater career. Per Politico, a U.S. Circuit Court of Appeals ruled Miller was misled in 1958, and his conviction was overturned.

He went on to write more successful plays including After the Fall, Incident at Vichy, The Price, and The Last Yankee, and The Crucible was turned into a 1992 film starring Daniel-Day Lewis and Winona Ryder.

Maisel ultimately flips this narrative, and Abe is the one to pick up the stagnant pen. Assuming he takes the Village Voice job, perhaps he'll be seeking more advice from Asher in Season 4.