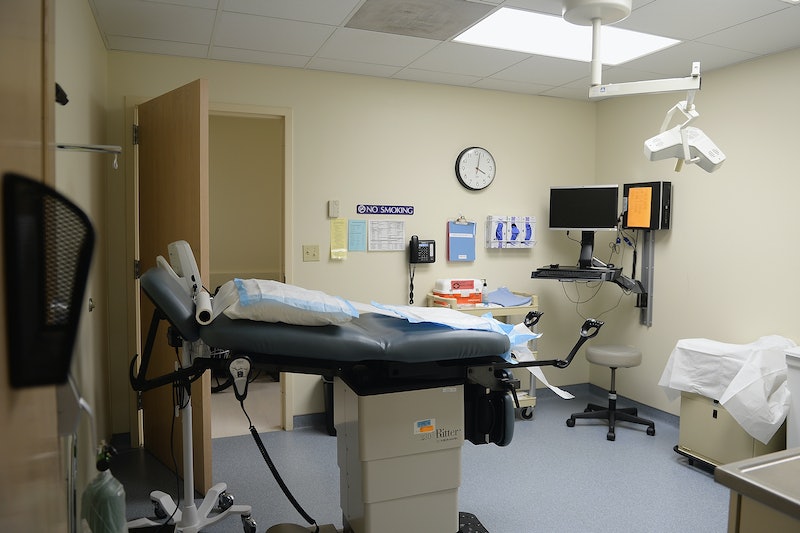 As the novel coronavirus spreads, hospitals are running short of critical supplies, such as masks and other personal protective equipment (PPE). To address the problem, on March 20 President Donald Trump asked all medical facilities to postpone elective procedures. In Texas and Ohio, the list of "non-essential" procedures includes abortion. Officials in both states have ordered clinics to stop providing abortions that aren't "medically necessary." On Monday, the Texas Attorney General's Office took the order a step further, announcing that any doctors who provide an abortion, unless specifically to protect a mother's life, could face fines of up to $1,000 or 180 days in jail.

The American College of Obstetricians and Gynecologists and seven other medical associations released a joint statement on March 18 saying they don't support coronavirus responses that cancel or delay abortions. Delays of days or weeks "may increase the risks or potentially make it completely inaccessible," the statement says. "The consequences of being unable to obtain an abortion profoundly impact a person’s life, health, and well-being." A January 2020 study found a large increase in financial distress for six years after someone was denied an abortion.

In both states, these orders are already affecting patients. "The reasons that people make a decision to end a pregnancy include the impact on their health, ability to work, strained economic circumstances," says Kellie Copeland, the executive director of NARAL Pro-Choice Ohio. "All of these things are heightened during a pandemic. Denying or delaying a patient's access to abortion care puts an incredible burden on these people and their families."

In Texas, the effects are already being felt

After the announcement from state Attorney General Ken Paxton, some Texas clinics have put services on hold. According to Amy Hagstrom Miller, the president and CEO of Whole Woman's Health, her team had to cancel more than 150 abortion appointments Monday night. (Whole Woman's Health has three Texas clinics.) "Patients were sobbing, even begging us not to cancel their appointments," Hagstrom Miller says. "This is not fair to make our health care team carry out these cruel orders, when these very people work day and night to provide compassionate, safe abortion care to those who need it.”

Even before the executive order, the pandemic was already affecting abortion accessibility, says Amanda Williams, executive director of the Lilith Fund for Reproductive Equity. Her team heard from clients who'd lost their jobs and were unable to pay for the procedure. "Last month, our clients had to travel on average 205 miles round-trip to get to a clinic," Williams says. "Now, with the enactment of this executive order, Texans will be confronted with further barriers to care."

On March 20, Ohio Attorney General Dave Yost ordered three of the state's abortion clinics to stop all "non-essential" and "elective" surgical abortions, which he said violated a March 17 order from the state health department. Yost sent a letter to Dayton's Women's Med Center, Cleveland's Preterm clinic, and Planned Parenthood of Southwest Ohio's Cincinnati Surgery Center after receiving complaints about them, according to WBNS News. The letter described non-essential surgical abortions as "those that can be delayed without undue risk to the current or future health of a patient," The Columbus Dispatch reported.

But providers say those conditions don't exist. Chrisse France, the executive director of Preterm, tells Bustle that the clinic is continuing to provide abortions. "In compliance with the order from the Ohio Department of Health, our physicians will be making individualized determinations to ensure each person gets the health care they need," France says in an emailed statement.

Although all clinics are able to keep their doors open under the state's order, Copeland says Yost's letter could still impact access by creating confusion. Last spring, after Ohio passed a ban on abortions after six weeks of pregnancy, she says people didn't know whether abortion was legal. (The law was later blocked by a federal judge.) "Whether or not people have jobs or childcare is changing minute by minute," Copeland says. "The absolute last thing people need is to have politically motivated uncertainty interjected into all of this. There've been so many restrictions on abortion in Ohio over the last 10 years and so many closures of clinics that there has already been uncertainty for people who need abortion care about when, where, and how they can access that care. To interject more of that in the middle of this [pandemic] is just flat-out wrong."