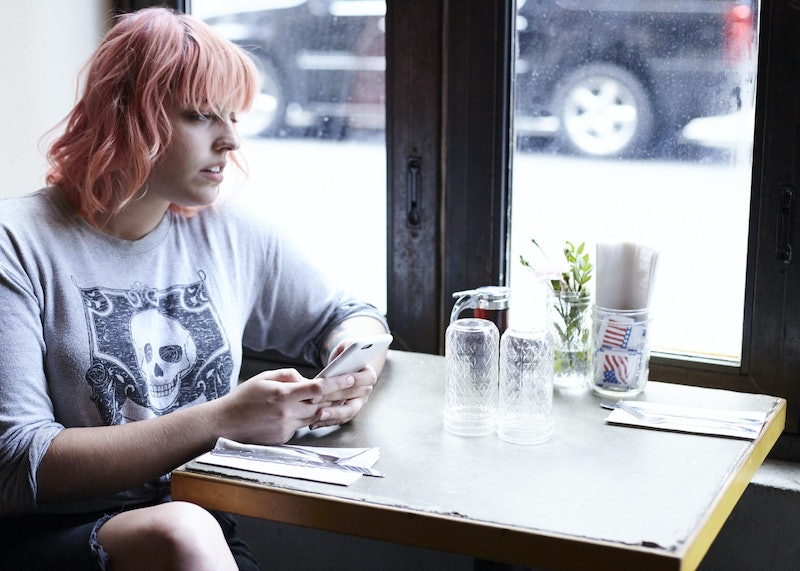 I made two phone calls the moment I found out I was pregnant: one to my best friend and one to my OB-GYN's office. I figured if anyone could tolerate me repeatedly saying "no f*cking way,” it would be my BFF. And if anyone knew anything about ending an unwanted pregnancy, it would be my gynecologist. After all, abortion is a common, safe, and legal medical procedure, which is why I never thought to ask, "Can my OB-GYN provide an abortion?"

But, much to my surprise, my doctor couldn't. I am embarrassed to admit I didn't push the issue and ask her why (to be fair, I was pretty distracted at the time). She still gave me plenty of information and a great referral, but it turns out my experience is common. While a 1996 law requires all OB-GYN residents to learn how to perform first trimester surgical abortions , a 2011 University of Chicago survey of 1,144 OB-GYNs found that although 97 percent of OB-GYNs had patients who asked for abortion care (which means almost every OB-GYN is going to have to answer questions about abortion at some point), only 14 percent of those surveyed actually perform abortions themselves.

There are lots of reasons for that. Fabio Ferrari, MD, is a practicing OB-GYN at Bellevue Hospital Center in New York City who cannot provide abortion services to his patients due to his lack of advanced abortion training. According to the American College of Obstetricians and Gynecologists (ACOG), not all residency programs provide the advanced training necessary for OB-GYNs to become abortion providers. "Approximately 32 percent of medical schools surveyed in one study offered at least one abortion-related lecture during the clinical years, and 45 percent of clerkship directors [medical school professors in charge of clinical rotations] stated that they provided clinical exposure to abortion," according to ACOG. In other words, medical students and residents have to actively seek out additional abortion training, usually provided at another institution or facility, in order to observe clinical abortion care. Even fewer physicians are trained to administer abortions at multiple gestational ages. "We get very similar training as far as how to perform first trimester abortion, since it’s the same thing as having to complete a spontaneous abortion [miscarriage] that has not passed on its own," Ferarri says. "So training wise, I would feel comfortable performing a first trimester abortion, but as a resident I didn’t have any advanced training in the second and late-second trimester."

Legal requirements can also deter an OB-GYN from offering abortion services. For example, in 11 states abortion providers must have some affiliation with a local hospital, even though the procedure can be performed safely and inexpensively in a doctor's office. According to a new report from the National Academies of Sciences, Engineering and Medicine, there is "no evidence indicating that clinicians who perform abortions require hospital privileges to ensure a safe outcome for the patient," but if a hospital in one of those states refuses to grant an OB-GYN privileges, the physician cannot legally provide surgical abortions.

Physicians have to meet additional requirements to administer medication abortions, too. They are required by the FDA to complete a certification and only administer the drugs in certain settings. Due to these restrictions, many OB-GYNs opt not to offer medical abortion services, either.

When your OB-GYN can't or won't perform an abortion, they should refer you to a licensed physician who will. Ferrari tells Bustle that even though he does not perform abortions, he does know how to provide his patients with abortion information and resources and feels bound to do so. "As an OB-GYN, I think it's important for patients to understand that physicians who go into OB-GYN are very invested in women's health care," says Ferrari. Indeed, the specialty's governing body requires it. ACOG mandates that "while individuals may personally oppose abortion, they must not impose their personal beliefs upon patients nor impede women from accessing abortion services." In other words, even if an OB-GYN doesn’t support a woman’s right to abortion, he or she still needs to respect their patient’s personal choice to have one.

"I think an OB-GYN that is strongly against a woman's choice would be hard to come by, since they understand the complications that arise if we don't allow access to these elective services," says Ferrari. According to the International Federation of Medical Students' Association (IFMSA), unsafe abortion contributes to 13 percent of all global maternal deaths, thanks to restrictive abortion laws, abortion-related stigma, and a lack of trained professionals willing and able to provide those services. "I refer any patient who wants a termination or is considering a termination," Ferrari says.

But not every OB-GYN agrees with Ferrari, or ACOG. Despite the standards of the profession, it's actually not uncommon or illegal for a physician to refuse to perform an abortion or provide a referral for one because of his or her own personal or religious beliefs. In 2004, Congress passed the Federal Refusal Clause, allowing health care companies and physicians to refuse to comply with federal, state, and local laws pertaining to providing and/or offering referrals for abortion services if doing so would contradict their faith. Hospitals, insurance companies, and individual health care providers have the right to refuse to provide, pay for, or refer a patient for an abortion on the basis of religion.

It's not surprising, then, that of the doctors in the University of Chicago study who refused to perform abortions, 52 percent said their religion was very important to them. Catholic and Protestant doctors were less likely to provide abortion care than Jewish or non-religious doctors, and doctors in the northeastern and western U.S. were more likely to provide abortions than those from the South or Midwest.

An OB-GYN’s gender and age may also factor in to the likelihood that they perform abortions. A reported 19 percent of women physicians are willing to perform the procedure, while only 11 percent of male physicians will. Young doctors, ages 26 to 35, are more likely to offer abortion than older doctors, too, so if your physician is on the younger side, your chances for receiving care might be higher.

Finally, some OB-GYNs opt not to perform abortions out of concern for their own safety. It’s no secret that abortion is a contested issue in the U.S., and even though abortion is legal in all 50 states, doctors who provide abortion services can face threats and occasionally violence from individuals ideologically opposed to the procedure.

Dr. Kathryn McClellan, a family medicine doctor in California and Fellow with Physicians for Reproductive Health and a fellow with Physicians for Reproductive Health, a group of doctors who advocate for reproductive rights, regularly travels from California to provide abortion care to women in Texas — a state where 96 percent of counties are without a clinic. McClellan tells Bustle that the current political climate can, and often does, deter OB-GYNs from providing abortion care. While protestors outside clinics mostly hold signs and shout, according to the 2016 National Clinic Violence Survey, acts of violence are becoming more frequent. "Last October I was in the middle of a procedure day when I was notified by our staff that a suspicious package was reported outside the clinic,” she says. “In the middle of procedures, we needed to evacuate patients and providers from the clinic. In my experience, it certainly makes you reconsider, or at least revisit, how and why it is you do this important work. It's a real threat, and I think a lot of [doctors] are understandably fearful."

But Ferrari stresses that the fact that your OB-GYN probably doesn't perform abortions should absolutely not deter your from talking to them about all of your options. "Patients should feel like [abortion is] normal, ... and they should have access to it. They shouldn't feel judgement from the physician if that physician doesn't perform the procedure."

If you don’t feel comfortable asking your doctor about abortion, though, or if they provided you with inaccurate information (such as being advised to visit a “crisis pregnancy center” when you request an abortion) or wouldn't give you a referral, you can find an abortion provider online via the National Abortion Federation, a professional association of abortion providers that includes private and non-profit clinics, Planned Parenthood affiliates, trusted women's health centers, hospitals, and physicians' offices. Ferrari also encourages patients to look up an institution online or call into their main office prior to making an appointment with a physician. "If the institution or practice has a website, look to see if there is any information [about whether they provide abortions]," he says. "If there isn't any, call the practice or office and ask [if the service is provided] prior to scheduling an appointment."

When my own OB-GYN declined to provide me with an abortion, it was frustrating to know I'd have to make a few more phone calls before I could get the care I needed. But it was also empowering to walk out of her office armed with a plan to help me seek the care I needed, wanted, and had the legal right to procure.