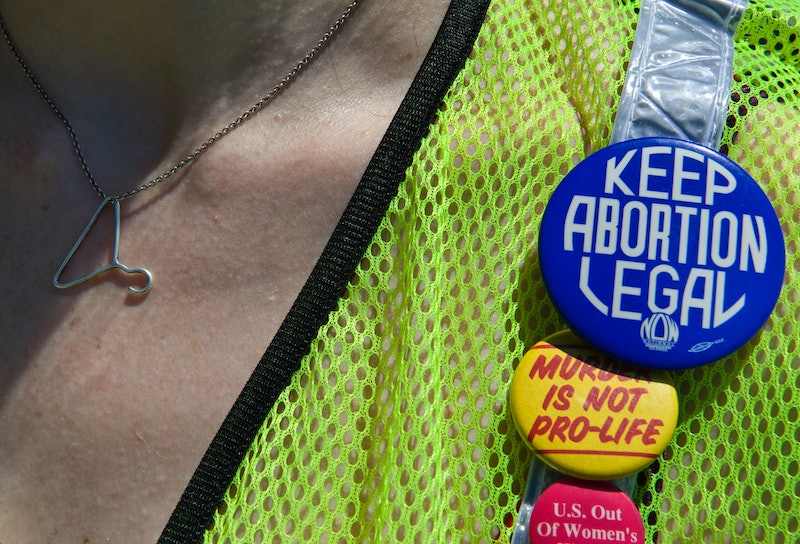 The language used to describe abortion at various stages of gestation can be confusing, and the politics surrounding the issue sometimes mean that even the name of the procedure comes with an agenda. The recent descriptions of second- and third-trimester abortion are a great example of this: referring to an abortion obtained between 21 and 40 weeks as "late term" isn't medically accurate, but the descriptor has been adopted nonetheless. So if you're asking yourself, "What is a late-term abortion?" know that you're not alone — the misinformation makes it difficult to decipher fact from fiction.

"There is no such thing as a late-term abortion," says Dr. D., an East Coast-based OB-GYN and abortion provider who offers abortions later in pregnancy and asked to speak to Bustle anonymously. "It’s actually an intentionally misrepresentative term. 'Late-term' means pregnancies that go beyond 41 weeks, and that’s clearly not applicable to the abortions that I think we’re all kind of talking about."

People have different ideas of what constitutes a gestational age beyond which abortion is morally indefensible. Some people are not comfortable with abortion being available at all, others feel it should be totally legal and available up to a gestational age where a fetus could potentially survive outside the womb (24 weeks gestation, according to the American Academy of Obstetrics and Gynecology) but not beyond that, and some people feel abortion should be legal and accessible at any gestational age. The problem occurs when terminology like "late-term" is used to conflate abortions performed at 20-29 weeks, which are exceedingly rare, with terminations at close to 40 weeks, which virtually never occur. According to the Guttmacher Institute, a reproductive rights policy and research organization, only 9 percent of people who have abortions do so after the first trimester, and only 1.3 percent of people have an abortion after 21 weeks. But even those procedures are not "late term."

To understand why it matters that language is being used to deter women from seeking later term abortions ("late" has no good connotations in this circumstance), consider who actually has an abortion after 21 weeks.

Many of these fetal conditions cannot be diagnosed prior to the third trimester, Dr. D. tells me, which is why abortions rights advocates lobby for abortion to remain an option later in pregnancy. And even when abnormalities are detected earlier — during the 20 weeks ultrasound, for example — parents might choose to undergo a series of tests or additional ultrasounds in the hopes that the initial detection was incorrect. "By the time the physicians know and the parents know that it’s an abnormality not compatible with life, they're at 30 weeks or 33 weeks," Dr. D. says. "They’ve been following a wanted pregnancy to see if the problem gets worse, and when it does it can often be later in pregnancy."

"The important thing to remember is that abortions later in pregnancy are not [happening because] people waltz in off the street and say, 'I’m done being pregnant, I want an abortion," Dr. D. says.

Second- and third-trimester abortions also occur as the result of laws that create barriers to abortion care, making it more difficult for people to terminate their pregnancies when they want to. A recent study published in the journal Obstetrics & Gynecology found that second-trimester abortion increased by 13 percent after House Bill 2 was implemented, an anti-abortion law that resulted in half of the abortion facilities in the state of Texas shutting down. The study showed that people seeking an abortion had to travel longer distances and ended up waiting longer to receive abortion services, prolonging their unwanted pregnancies and requiring later abortion care.

"If people were able to get abortions early in pregnancy, they would get them," Dr. D. says. "The issue is that now there is a whole slew of laws that are additive. There might be a state mandated consent, on top of the fact that someone has to drive 300 miles to get to their nearest clinic, and also get child care for two days, and also be out of work, and also have to come up with the money because their insurance doesn’t cover it like it covers other routine health care. And it all adds up and people find themselves where they’re later on in the pregnancy than they wanted to be."

For Beth, 24, from Portland, Oregon, multiple factors played into her seeking an abortion later on in pregnancy. When she was diagnosed with Polycystic Ovarian Syndrome (PCOS), a hormonal disorder that caused her irregular or missed periods, she was told she had almost no chance of conceiving. She also has Irritable Bowel Syndrome, which causes gastrointestinal distress. As a result, she had no idea she was pregnant for close to seven months.

Beth looked for an abortion provider who would terminate her pregnancy at that gestational age and was unable to find one in Oregon. While the state had just passed the Reproductive Health Equity Act, which expanded access to abortion services, Beth struggled to find an OB-GYN and abortion provider willing to provide an abortion that late in her pregnancy. "Because [the law] was so new, no doctor was willing to take the risk," she says.

With the help of a doctor in her home town, she did find a provider in New Mexico, but the cost of the procedure alone was $10,500, which didn't include travel, a place to stay, or money for food. The clinic in New Mexico wouldn't treat Beth past 28 weeks, so she was running out of time. "I thought I'd have to go through with the pregnancy because I didn't have the money and I didn't have the time to look harder."

Eventually Beth spoke to her parents, who along with The Northwest Abortion Access Fund and the National Abortion Federation helped fund the procedure and her travel. She had her abortion at 28 weeks and one day. "I had never experienced such panic, in the three weeks I had known I was pregnant," she says. "In retrospect I view [my abortion] as an investment in myself."

Beth says she faced intense scrutiny, judgement, and shame for her decision to terminate her pregnancy: shame no-doubt perpetuated by the large swaths of misinformation surrounding abortions that occur later on in pregnancy. "I had everybody telling me that I was making the wrong choice. That I was a bad person for making that choice," she says. "And I didn’t feel like a bad person. I felt like I was scared. I felt like the situation was stacked against me. I felt like I needed to move quickly and everyone else was in my way."

Misinformation about abortions after 21 weeks and how they are performed contributes to that shame and stigma. Critics of legalized abortion have claimed that "babies are ripped from the mother's womb just prior to the birth of the baby," that it's the same thing as "if you take the baby home and kill the baby at home," and that abortion providers "kill babies after birth." None of those statements is true. Most commonly (within the very small number of abortions performed later in pregnancy), the pregnant person either wanted the pregnancy or wanted to have an abortion much earlier. At this stage, their options are limited, but in no case do they involve harming a newborn, and the procedure is not comfortable or easy for the person having it.

"When we talk about abortions that happen prior to the third trimester, [we're talking about] inductions of labor," Dr. D. says, or surgical abortions that take place in an operating room or clinic.

According to Dr. D., an induction of labor for abortion is initiated and conducted like an induction of labor for a live birth. "We use the same kind of medications, we offer the same type of pain control, people go through the same process of the cervix opening and having to push and do all of the things that you'd do in a birth," she says. "I know a lot of people try to separate that out from abortion, or delivering pre-viability, but that's abortion."

In many cases an induction of labor for abortion is used when the fetus isn't viable, says Dr. D., and when the fetus is delivered, "comfort care" is provided. "This 'comfort care' is not allowing a baby to die," Dr. D. says. "It’s a baby that was going to die, and we give it essentially the same hospice care that we’d give someone who had some other type of terminal illness. They’re kept comfortable, and the family is allowed to spend time with the baby and hold them, and often there are people there to take photographs. It can be a really meaningful experience for families who are grieving."

The decision to have a surgical abortion later in pregnancy, versus an induction of labor, depends on a patient's preference and their medical history, Dr. Diane Horvath, an OB-GYN and abortion provider and fellow with Physicians for Reproductive Health, tells Romper. "Some people needing abortion later in pregnancy choose surgical abortion because they want to receive deeper sedation and not be awake for the procedure," she says, "or because they prefer the predictability of being in the operating room rather than the more unpredictable (and often longer) process of going through a labor induction. For some families, the idea of going through a labor induction to deliver a pregnancy that will not survive is too heartbreaking, and so they might choose a surgical procedure for that reason."

There are also situations, according to Dr. Horvath, where an induction of labor is simply not safe for the pregnant person. "An example of this might be a problem with the placenta that puts someone at high risk of heavy bleeding if they were to have a labor induction," she says. And if a pregnant person is critically ill and needs an emergent abortion, a surgical procedure is called for, as it takes much less time than an induction of labor.

Generally, these procedures involve preparing a patient's cervix for dilation with either medication, osmotic dilators (sticks of sterilized natural or synthetic material placed inside the cervix), or both. The sticks take between 10 to 15 minutes to place, according to the UCLA Obstetrics and Gynecology website, and are left inside the patient until the cervix is dilated fully. "Sometimes this is a multiple-day process and other times it can be completed in one day," Dr. Horvath says. "Depending on the gestation of the pregnancy, a medication might be used to stop the fetal heartbeat before the uterus is emptied." This, again, is exceedingly rare.

Once the patient's cervix is dilated — and again, this process can take anywhere from one day to multiple days — a combination of aspiration and instruments are used to remove the fetus. During this process, most patients receive a combination of IV sedation and local anesthetic, Dr. Horvath says, and the procedure itself takes 20-30 minutes. "Typically, people spend about 30 minutes in the aftercare or recovery area and then go home the same day," she says.

As the 2020 presidential election nears we're sure to see abortions that occur later in pregnancy, the people who offer them, and the people who obtain them demonized in an attempt to rally socially conservative groups and secure votes. But evidence shows that these cases are rare, nuanced, and performed mostly on wanted pregnancies or pregnancies that women tried to terminate earlier and couldn't due to limited access. Everyone seeking a second- or third-trimester abortion is in need of accurate information, support, and quality medical care.