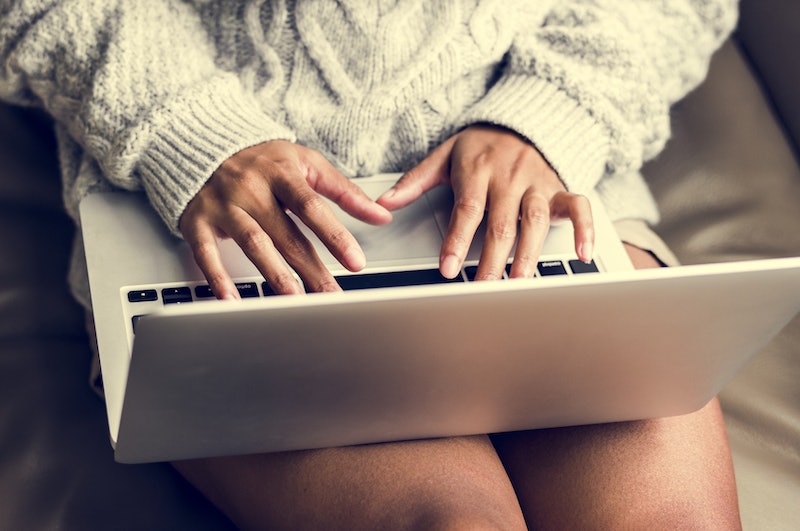 Since Supreme Court Justice Anthony Kennedy announced his retirement and President Donald Trump nominated conservative Justice Brett Kavanaugh as his replacement, the overturning of Roe v. Wade has become a realistic possibility. As citizens, politicians, and advocates discuss the future of abortion access, many predict that women will turn to remotely supervised, medication-induced abortions if the landmark decision is reversed. So, what is telemedication abortion? While it's not exactly common in the U.S. right now, it could be one of the ways women from all over the country access safe and affordable abortion services, even if it is made illegal in some areas.

Dr. Ghazaleh Moayedi, an OB-GYN in Hawaii and fellow with Physicians for Reproductive Health who provides telemedication abortions to her patients, says there are actually two telemedicine abortion models available to patients in the United States: a clinic-to-clinic model and a direct-to-consumer model. "The clinic-to-clinic model is currently offered in many states where there aren't laws directly targeting the provision of abortion by telemedicine," Moayedi says. "In this scenario, a patient can go to a local health center [that offers telemedication services] to meet with clinic staff, learn about medication abortion, have their medical history reviewed, and receive the diagnostic work necessary (including ultrasounds, blood tests, etc.) before receiving medication abortion care. The patient will then video conference [from that local health center] with an abortion provider who is at a centralized location within the state."

According to Elizabeth Clark, Director of Health for the Planned Parenthood Federation of America, Planned Parenthood health centers in 14 states currently use telemedicine to provide patients with access to medication abortion using the clinic-to-clinic model. "We are continuing to expand this work and are planning to add several additional sites by the end of 2018," Clark says, "as part of the work we do to try and get people care, no matter where they are."

The second model is direct-to-consumer, and it's part of an ongoing study currently being conducted by Gynuity Health Projects, according to Moayedi. "In this model, the patient does not need to go to a local health center for their virtual abortion provider visit," she says. "Instead, the patient can use their own cell phone, tablet, or computer from anywhere in the state (like her home) to video conference with an abortion provider anywhere in the state." As with the clinic-based telemedicine model (or any abortion care process), the patient receives all necessary information, signs consent forms using a secure document signing platform, and electronically receives written instructions. The abortion provider also sends an order for the patient's diagnostic work-up (i.e. blood tests and/or ultrasounds) to a local facility, and reviews the results to ensure the patient is an appropriate medical abortion candidate. "Once the video conference and subsequent diagnostic work-up is complete, the abortion medications are mailed directly to the patient's home," Moayedi says. "She then completes her abortion at home and has a virtual follow up visit."

Anyone who is eligible for a medication abortion is eligible for a telemedication abortion, as long as they live in an area that doesn't legally restrict it. According to the Guttmacher Institute, 19 states require the abortion provider to be physically present during the procedure, essentially outlawing any telemedicine practices for abortion care. "We have analyzed the first seven years of data from Iowa where they've been using this model and 20,000 medication abortions, and there was no increased risk of having a complication with medication abortion when women have the service through telemedicine compared to having it with an in-person visit," Dr. Daniel Grossman, an abortion provider and director of Advancing New Standards in Reproductive Health (ANSIRH), who has researched and written about the safety of telemedication abortion, tells Bustle. According to Dr. Grossman, the mortality rate associated with childbirth is 14 times higher than the mortality rate associated with abortion. There’s no evidence that formalities such as facility requirements or requiring the abortion provider to have admitting privileges at a local hospital improves the safety of an abortion, either.

What does make you ineligible for a telemedication abortion includes having an IUD in place (it must be removed prior to having a medication abortion), having severe anemia, your gestational age (it's really only recommended up to 70 days after the last day of your first period), being on anti-coagulation medications, or having a bleeding disorder.

"Another important finding of our research in Iowa was that the introduction of telemedicine helped women access abortion care earlier in pregnancy," Grossman says, "particularly in more rural parts of the state, and it significantly reduced second trimester abortion." Even though second trimester abortion is also very safe, it is associated with a higher risk of complication compared to earlier abortion. "I think we would all agree that if a woman has made her mind up to have an abortion she should be able to access it as early as possible in pregnancy when it’s simpler, lower risk of complication, and less expensive for her," Grossman says.

Of course, telemedication abortion won't be a legal option in states that would outlaw abortion if Roe v. Wade were overturned. "While I don’t have a lot of concerns as a physician about the medical risks for self managed abortions, I do have the concerns for legal risks today and with Roe’s standing," Grossman says. "At least 19 women have been prosecuted for allegedly self-managing their abortion, and it's likely that that [number] will only increase if restrictions become more severe."

How telemedicine is used in other countries that severely restrict abortion access could give us an inside look as to what might occur if Roe is reversed. "There are other kinds of telemedicine models used in other countries where abortion is legally restricted — like Women on Web, Safe2Choose, Women Help Women," Dr. Grossman says. "They will evaluate people who contact them, review their medical history (including how far long they are in their pregnancy), review information on how to use medications on their own, then they will mail them the medications. If women have questions about how to use the medications or are concerned about the side effects or complications, they can also contact clinicians and support staff through these websites."

According to Dr. Grossman, these sites are currently not providing services in the U.S. because they only work in places where abortion is highly restricted. "If Roe were to fall and abortion became illegal in some states," he says, "I think it’s likely that we would see similar kinds of services pop up here in the U.S. as well. I certainly am not advocating for these illegal models, but I think the reality is that it’s very hard to crack down on pills. There will be ways to get these pills no matter what."

As the fate of Roe v. Wade hangs in the balance, it's tempting to reach for stories of back-alley abortions and hold up coat hangers at rallies to emphasize the harm such a decision would do to women. But neither is an accurate representation of what would likely happen if the landmark case is overturned. If Roe is reversed, women seeking abortion in states that outlaw it entirely will be breaking the law, which, as Grossman suggested, could mean serious legal repercussions for them. But unlike in the past, they will have medically safe options for obtaining the abortions a number of them will seek regardless. Medication abortion is effective, and the advent of both medication abortion and telemedication abortion is giving people who need abortions an alternative to "taking matters in their own hands." When women have access to effective medications and the necessary information to use them correctly, self-managed abortions are usually successful and free of medical complications. The legal consequences that might be imposed on women for having them remain to be seen.