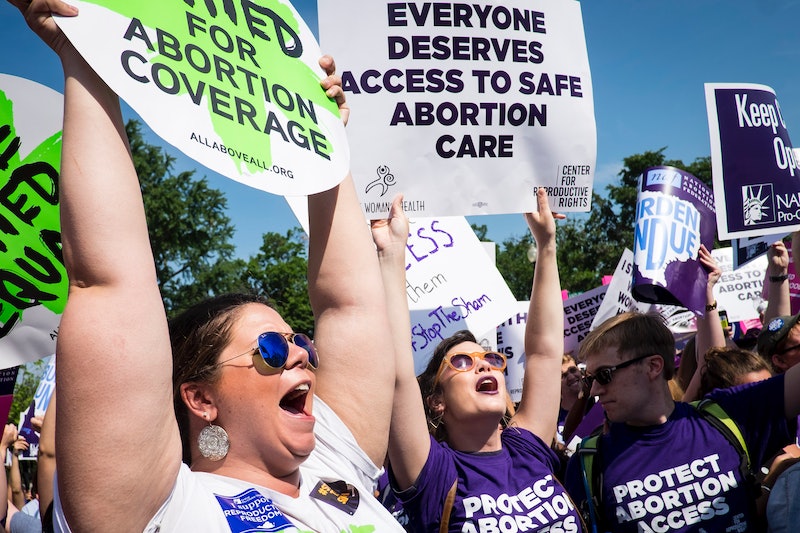 In the 1973 case Roe v. Wade, the Supreme Court ruled that the Fourteenth Amendment guaranteed a right to privacy that protected an individual's ability to choose an abortion. The landmark decision handed down in Roe v. Wade means that abortion remains legal in every state, despite the severe restrictions that have been signed into law in states like Alabama, Georgia, and others.

Shortly after Georgia passed legislation banning abortion roughly six weeks after conception, lawmakers in Alabama passed the most restrictive abortion ban in the nation. While Georgia's ban prohibits abortions after the electrical activity of an embryo can be detected via ultrasound (as Popular Science has reported, the term "heartbeat bill" is vastly misleading), the Alabama Human Life Protection Act makes abortion and attempted abortion performed at any stage of gestation felony offenses except in cases where the woman's life is at risk. Under Alabama's law, doctors who perform an abortion could be punished by at least 10 years in prison.

But while governors in Georgia and Alabama have already signed their state's respective bans into law, those laws aren't set to take effect for months, meaning residents of either state can still get an abortion. According to NPR, Georgia's ban will take effect January 2020. Meanwhile, Alabama's law doesn't go into effect for six months, NBC News reported.

Still, alarming headlines, panicked tweets, and a breadth of misinformation, however, have led to some confusion about whether or not abortion is still legal in certain states. According to NBC News, anxious patients began calling abortion providers in Alabama almost immediately after Gov. Kay Ivey signed the state's latest abortion ban into law.

"They're in a panic and they're scared," a volunteer at the only abortion clinic in Montgomery, Alabama, told NBC News of the many people who'd called to ask if the clinic had closed, if abortions could still be obtained, or if the procedure was now illegal. "We say that is fine, you can still come in, because they don’t realize that this is going to stay open for the next six months.”

To be clear, you can still get a safe and legal abortion at or before 20 weeks in Alabama or Georgia today, tomorrow, next week, next month, the month after that, and so on until November at the earliest. You can also still get an abortion in Mississippi, Kentucky, and Ohio, where legislators passed so-called "heartbeat" abortion bans earlier this year. According to the Associated Press, Mississippi's ban is set to take effect July 1 (if it's not blocked or overturned before then by a court of law), at which point abortion will still be legal but restricted to the first six weeks of gestation.

The laws in both Georgia and Alabama are likely to face legal challenges similar to lawsuits brought against the abortion restrictions signed into law in Ohio, Kentucky, and Mississippi. What's more, the eight-week abortion ban passed Friday in Missouri will also likely be challenged in court. Six-week abortion bans previously passed in Iowa and North Dakota have already been struck down as unconstitutional, USA Today has reported.

In fact, the ACLU of Georgia has already vowed to block Georgia's Living Infants Fairness and Equality (LIFE) Act, which they characterized as an "assault on women's health, rights, and self-determination." Similarly, the ACLU of Alabama has vowed to challenge the Alabama Human Life Protection Act.

"By signing this bill, the governor and her colleagues in the state legislature have decided to waste millions in Alabama taxpayer dollars in order to defend a bill that is simply a political effort to overturn 46 years of precedent that has followed the Supreme Court's Roe v. Wade decision," executive director of ACLU Alabama Randall Marshall said in a statement. "We will not allow that to happen, and we will see them in court."

Marshall also sought to remind residents that, for now, abortion remained legal. "Despite the governor signing this bill, clinics will remain open, and abortion is still a safe, legal medical procedure at all clinics in Alabama."