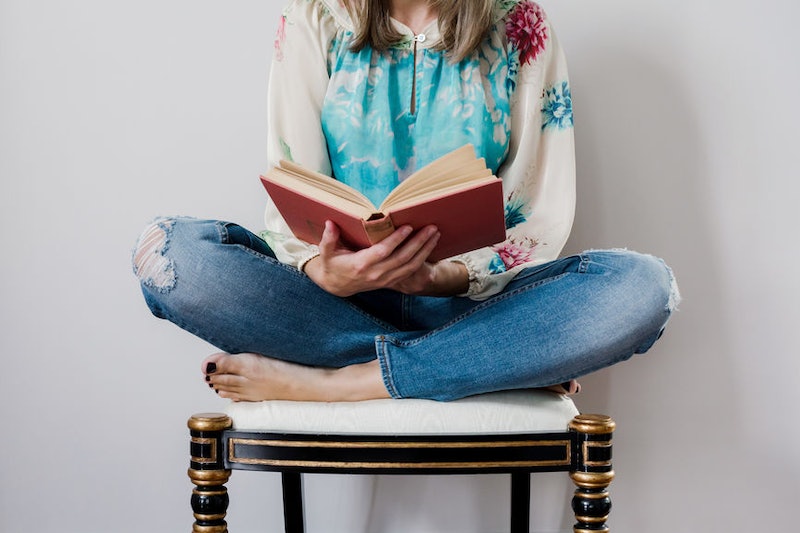 There is a moment in Lauren Weisberger’s latest novel When Life Gives You Lululemons, the sequel to The Devil Wears Prada, when protagonist Emily Charlton (Miranda Prestley's former junior assistant) thinks back to the night she first had sex with her husband, Miles. Emily explains to him how an IUD works, and tells him she’s "never" getting pregnant. At that moment, anyone who has ever read a romance or women’s fiction novel knows Emily will be a mother before the book is over.

Of course, she does get pregnant — on accident, despite her birth control. Weisberger does her due diligence in the construction of Emily’s character arc, but there is one thing conspicuously missing: any mention at all of getting an abortion. Despite the fact that this is a surprise pregnancy and readers are previously told that Emily does not want kids, never once does she consider ending her pregnancy.

I don't have a particular gripe against this novel, in particular, but I do take issue with the fact that abortion is barely mentioned in women's fiction and romance in general, despite the fact that one in four U.S. women will have an abortion before the age of 45, according to Planned Parenthood.

Despite the fact that this is a surprise pregnancy and readers are previously told that Emily does not want kids, never once does she consider ending her pregnancy.

Unfortunately, the omission of any mention of an abortion is no more unusual than the presence of the "accidental" pregnancy trope in women's fiction. In the case of When Life Gives You Lululemons, it would be so easy to add one single throwaway line, something like, "Emily considered having an abortion but the more she thought about it, the more she realized she actually wanted to go through with the pregnancy."

USA Today bestselling author Jenny Trout noticed this phenomenon while writing a series of popular 50 Shades of Grey recaps on her blog.

"I'd read the scene in Fifty Shades Freed where Ana becomes pregnant and Christian throws this violent tantrum about it, punching the table, calling her stupid, freaking out because he didn't want a baby yet and Ana is freaking out because she doesn't know if she wants a baby yet," Trout tells Bustle in an email conversation. "And the thing that popped into my mind was, 'Get an abortion, idiots.' Like, this book was taking place in a world where birth control was discussed right down to Christian Grey tracking Ana's menstrual cycle, but in all of his heavy-handed 'sign this, initial here' stuff there was never any mention of what would happen in the event of an unintentional pregnancy. It was basically like, well, birth control will never fail, so this issue must not be addressed. It was like abortions just did not exist in that world. And then I realized that I'd never actually read a romance novel where an unintended pregnancy resulted in anything other than happily ever after with a baby."

So in book two, Trout's heroine Sophie, who doesn't want a baby, has an abortion. She has the full support of the hero, sexy billionaire Neil, who would also have supported Sophie (financially and otherwise) had she chosen to carry the pregnancy to term.

Trout was ready for the blowback, and she got it in the form of nasty reviews from readers who couldn't stomach a story that involved a well-considered abortion. But then she started getting another kind of reaction.

“I started getting emails and people on social media who loved it," she tells Bustle. "I was really stunned at how many positive reactions I got. Especially from young women who were telling me, yes, thank you, I was so worried she would keep the baby. It was such an expectation that they were going to be let down by a book or a series yet again.”

Trout's abortion storyline was a welcome relief to readers who were exhausted by the implication that women should always want motherhood. "We seem culturally okay with a woman who doesn't want a child due to extenuating circumstances, but we almost need that reassurance that she would be perfectly happy having a child conceived under the right circumstances," Trout tells Bustle. "Otherwise, she's selfish.”

"I was really stunned at how many positive reactions I got. Especially from young women who were telling me, yes, thank you, I was so worried she would keep the baby."

When Life Gives You Lululemons gives readers a heroine who is unapologetic and ambitious and catty. She loves sex and doesn't worry about being likable. Sex-loving, snarky women can be and are enthusiastic mothers — but if a characters professes to not wanting children, then decides to have a child, it seems as though the author should at least address that she has the option to have an abortion. There should not be an assumption that women who say they don’t want kids will eventually come around to the idea.

Late in When Life Gives You Lululemons, Emily’s friend Miriam teases her about the surprise pregnancy. She says that while others may have assumed Emily would "throw [herself] off a building" if she got pregnant, Miriam “knew that wasn’t the case.”

It’s a joke. A throwaway line that implies Emily's friends know her better than she know herself. But it doesn't feel like a joke when you realize that Emily, the character, never had another option. Happy and purposefully childless women exist in reality, often because they chose abortions. There’s no reason they shouldn’t exist in fiction, too.