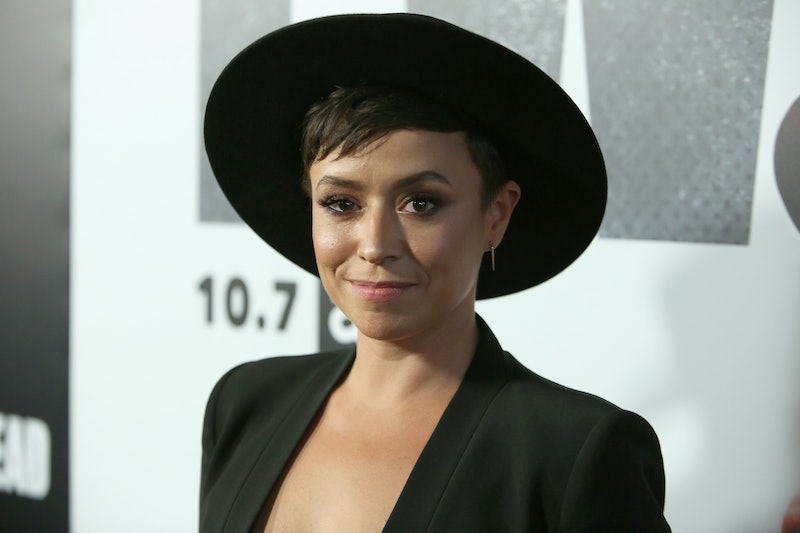 Actor Briana Venskus has made a name for herself with regular appearances on Nashville, Supergirl, and, most recently, significant supporting roles on Agents of S.H.I.E.L.D., The Walking Dead, and Good Trouble. But in November of 2018, she hit a snag in her growing career when she was told by her manager that she didn't get a guest spot on a TV show because she wasn't "authentically LGBTQ enough."

After hearing this critique, Venskus, who identifies as a bisexual woman, took to Instagram to take a stand. Her post about the experience was widely circulated on Twitter and Instagram, earning Venskus over 10,000 likes. "I'm so tired and frustrated with this Hollywood stereotype of LGBTQ," she wrote in part. "What does that even mean to be 'Authentic LGBTQ'? Do I not look the part to you? What does the 'part' of LGBTQ look like to you Hollywood if actual LGBTQ people can't even be seen as 'Authentic.'"

Four months later, Venskus is opening up to Bustle's Associate Entertainment Editor Olivia Truffaut-Wong about getting that disheartening feedback, her decision to share her experience on social media, and what she hopes for the future of casting in Hollywood as she continues working on Good Trouble and Agents of S.H.I.E.L.D.

In the fall of 2018 I, along with a handful of other actresses, got an audition notice for a character on a TV show. In the description it said that she was a lesbian and it said that she was a working professional — educated, very smart — and enters into a relationship with a character on the show. So, I thought, "Oh, great, cool, got that in the bag." I auditioned and did really well; I even went in for a callback with the producers. A week or so passed with no news, which in Hollywood usually means, "thanks but no thanks."

Cut to a month later. I was at work on Agents of S.H.I.E.L.D., sitting in my trailer, waiting for them to call me to the set, when on a whim I decided to reach out and ask if we had received any feedback from my audition. Moments later, I saw the response pop up in my text messages that I didn't get a part on the TV show because they needed to cast the role "authentically LGBTQ." That was the phrasing used by the powers that be. I saw the words, and I was just like, the f*ck? I could barely get my mouth up off the floor to form words to respond. It was like someone had spoken an entirely new language that I'd never heard before. How do these words even go together? What does that even mean? "Are you sure?," I thought. "Have you seen me?" I was in a state of shock. 31 years of life, 16 of which have been openly out, led to a moment of being inadequate in my own identity.

Hearing that I wasn't "authentic" enough could only mean one thing — that visually, I just didn't quite fit the mold of what they thought a real LGBTQ person looked like. I went back and read the character description again, thinking that maybe I had missed some visual aspect in the breakdown. Nope, by all accounts, they were just looking for a human lady, who happened to look like other human ladies.

I ran through the audition over and over again in my head — there was no viable explanation other than I didn't fit a lesbian stereotype, most likely "butch." Which is a wonderful thing to be, but, at the same time, if you're going to be casting a role that doesn't have a specified look, you have to be open to every realm of that community, which, news flash, looks like any and everything. I look at myself, my friends, and other people I grew up with in the LGBTQ community; there is no rhyme or reason to what we look like, and it's time for Hollywood to acknowledge that.

It's hard to be mad about it, though, as angry as I was originally, because I do realize we are at a time in Hollywood where we're really trying to open up to diversity and be inclusive to all aspects of people and humanity. I do think the intentions behind their casting choices and feedback were, at the core, trying to do good. But I also think that these good intentions are a bit of a compromise. We're pushing for this idea of inclusivity, but at the same time we're playing by the rules that are defined by stereotypes and set into motion by people who are paid to shape the image of LGBTQ presence in Hollywood without ruffling any feathers.

Maybe they didn't know I was LGBTQ. In fact, they're not legally allowed to ask if I'm gay or not, which is appropriate — my sexuality shouldn't be a qualification for hiring — but in a lot of situations, it is now a prerequisite for casting actors in LGBTQ roles. I think it's great that TV shows and films actually want to hire people in our community for these roles, but to not hire someone who doesn't "look it" raises a greater issue. They made the assumption that I'm not part of the LGBTQ community because I look a certain way, and because I didn't verbally or visually express to them that I was — it disqualified me, and that's why I spoke out.

After some serious thought, I hesitantly posted about this casting experience on my Instagram, and much to my relief, the response was really positive. I think in a way, it opened up a dialogue about why we are pigeonholing people in our community that have literally fought their entire lives not to be pigeonholed.

If sharing this story accomplishes only one thing, I hope it's that the people who saw it, especially people who are in positions of power, can look at it and say, "You're right. This lesbian character, this gay man, this bisexual woman, or queer person doesn't need to fit this standard or idea that I have for LGBTQ people. And I shouldn't reinforce that standard and stereotype in this role." I hope that maybe, just maybe, it'll be in the back of someone's mind, and they'll just like hear a little chirp and go, "OK, let's take a second look at this." Just to even have somebody question their thoughts or question their actions would be a win.

At the end of the day, I shouldn't have to walk into an audition for a gay character and say, "By the way, I also like women." That shouldn't be the way anyone goes into a job interview. I don't want to have to tailor what I am or lean into a stereotype of a bisexual woman, or a gay woman, or any "type" of woman. I just want to be an actor. I want to be me, and I want to bring myself to the table in the stories I tell. There has to be a way to create more inclusion in Hollywood without discrediting someone's identity just because it doesn't fit a mold. In fact, there should be no mold at all. You can't tell someone that they're not enough for a community they're actually in. And you definitely can't tell me that I'm not LGBTQ enough.