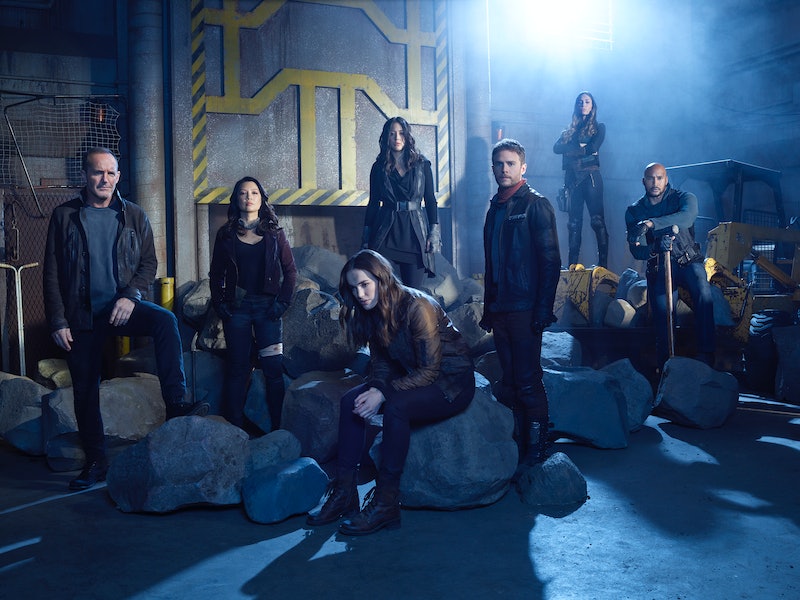 Marvel is going to infinity and beyond on the big screen after a decade of build up for Avengers: Infinity War, so it only makes sense that the small screen properties do the same. Coming off of its most critically successful season yet, Agents of SHIELD dropped the mic in the Season 4 finale, revealing that after Agent Phil Coulson (Clark Gregg) and his SHIELD team finally escaped the Framework for a nice meal at a diner together, all of them minus Fitz (Iain De Caestecker) immediately were abducted and woke up to find themselves on a space ship. With no knowledge of how they were sent into space or who was behind it or why, Season 5 begins at that exact moment of complete and utter confusion. SHIELD is really going full throttle this year!

When the first Marvel TV series first premiered back in 2013, before Captain America: Winter Soldier, the ABC series was all about overt ties to the Marvel Cinematic Universe, featuring everything from character cameos like Nick Fury (Samuel L. Jackson) and Lady Sif (Jaimie Alexander) to complete mythology overhauls like Winter Soldier's twist revealing that SHIELD was actually corrupted by Hydra. However, now that SHIELD the series is running full-speed towards its 100th episode, the Marvel TV property has become less beholden to that, eschewing overt ties to the films and instead connecting more to the larger themes of the MCU. So when the MCU began to go into the great unknown of space for Thor: Ragnarok and the upcoming Avengers: Infinity War, SHIELD decided to go for it too.

"You're right: it's a thematic tie [to the MCU]," executive producer Jed Whedon says, sitting on the set of SHIELD next to the giant Quinjet while celebrating reaching 100 episodes. "We try to make it feel like that the whole thing is moving in this swelling direction. We're not in space for no reason. We wouldn't have gone there if they hadn't."

Acknowledging that "the overt ties were a necessity of starting out" as Marvel's first TV series, Whedon and executive producer Maurissa Tancharoen are excited by the fact that they have been freed from having to incorporate those as SHIELD gained its own mythology over the years.

"That started to be much more interesting to us, and hopefully to the audience, just digging that stuff up," Whedon says. "No one wants to come to see our show to see another show. Now they want to see our show, which, yay!"

But the events of the Marvel films still have a huge influence on SHIELD's plot (i.e. Hydra's corruption of SHIELD, the Sokovia Accords, etc.).

"We try to a little bit follow in the wake of the films as they plot new territory in the MCU," Whedon explains. "Last year that was magic with Dr. Strange. We felt like Ghost Rider all of a sudden fit into our show in a way that we didn’t necessarily feel like he would have before, tonally."

And that's how SHIELD decided to go into space for Season 5. "This is us expanding out even further into the world of space which they very much are living in now in the features," Whedon says. "It's the great unknown and we hadn't explored it yet."

Tancharoen then references a line that Mack (Henry Simmons) exclaims in frustration at learning where the group ended up in the season premiere: "It's the one thing we haven't done yet!" The SHIELD showrunners knew they were "definitely heading into space as we approached the end of last season," Tancharoen says. "Every year we reset the series, and this year we definitely knew that it would be the most giant reset to date."

Calling it a total overhaul of the show, from the sets to costumes to props even down to the music, Whedon says that "it's like a new challenge for everybody who has been working on this show for five years, and by exciting I mean too much work for everyone involved."

From a creative standpoint, the two-pod season (meaning that Season 5 will be split into two chunks of storytelling as opposed to last year's three) will be a direct answer to everything that happened with last year's Framework and the LMD's and what that did to the team.

"Last year was about tearing everybody apart. We spent a lot of time doing that," Whedon says. "We started the year with everybody with different job assignments, Daisy [Chloe Bennet] was off on her own, we brought them together but only to break them apart again in the Framework. They were not only losing each other but losing themselves."

So the goal the showrunners set out with this season was inspired by Daisy's speech in the diner that says, "'If we go down, we go down together. We're in this together,'" Whedon says. "We wanted to create a situation where that would occur. And then, putting that family together in an intense situation will end up causing drama internally, inevitably."

Calling it "the craziest roller coaster adventure we could think of," Whedon reveals they decided to "drop everybody, them and the audience, right in and let everybody go, 'What the … ' You can fill in the blank on the last one."

Tancharoen helpfully adds, "What the fart." And while the narrative progression seems natural, Whedon promises that going to space is not something they've been planning for five seasons. "I think if we said that we were, that would be just an outright lie," Whedon says with a laugh while Tancharoen adds, "Or just a better story."

"We put all [the characters] together [this season]," she continues. "Last year they started off all sort of scattered, and this year we have them together, hunkered down in this place, this new place. It's all a mystery to them, together. The audience is also discovering where they are alongside the characters so that's also a new part of this reset."

Launching SHIELD into space, with all-new sets on the Lighthouse space station, costumes and even CGI characters with alien monsters called "roaches," completely terrified the showrunners ... which is something they feel at the beginning of every new season. "Every year we're terrified about what we're about to venture into," Tancharoen says. "Every year we say that we back ourselves into a corner. Last year, Ghost Rider, that was something that was not in our comfort zone. We were just doing that again this year, ten fold, to everybody."

While Bustle has seen the two-hour premiere (airing Friday at 8 p.m. on ABC), with both episodes ending on two of the most jaw-dropping cliffhangers ever, not much can be revealed prior to the episodes' debut except that this season will show off a new side to Coulson.

"What I would say is the deal he made with Ghost Rider at the end of Season 4, that debt will come due at some point," Gregg says, while head of Marvel TV Jeph Loeb stared daggers at him lest he reveal anything more. "I think it just raises the stakes on everything going forward."

While he couldn't elaborate any more than that under threat of death from Marvel (they take security very seriously), Gregg was able to discuss just how much he was impressed by the writers and producers of SHIELD creating a whole new world this season.

"I just stand in awe of the way our writers and our producers, even after our most successful season by most accounts, just tear the whole thing apart and just take us to an entirely new universe," Gregg says. "It reminds me of comics, and it's really thrilling because I think if we were still basically doing the same thing as we were doing in our first 10 episodes we'd probably be a little bored by now. But it's a reboot every year."

No matter how different SHIELD will be this season in space (and possibly missing one major member), Loeb promises that, at its core, SHIELD will always be the same show it started out as in Season 1.

"What makes us so proud of the show as we're here celebrating our 100th episode, is that Jeff Bell and Jed Whedon and Maurissa Tancharoen lead a group of writers that really understand that what makes the show exciting is that at its core, it's always about a group of individuals who are trying to find the weird, the unusual, the dangerous, the sometimes humorous things that are out there," Loeb says. "And we just went a little more out there this particular time. It takes us into different environments, it enables us to change up the dynamics between the characters. It all starts, begins and ends with the concept that this is a family that is trying to figure out how to survive doing their job and still get home safely so they can be together."

That might be a little harder than they first think. But fans will have to wait and find that out at the same time as the SHIELD agents.