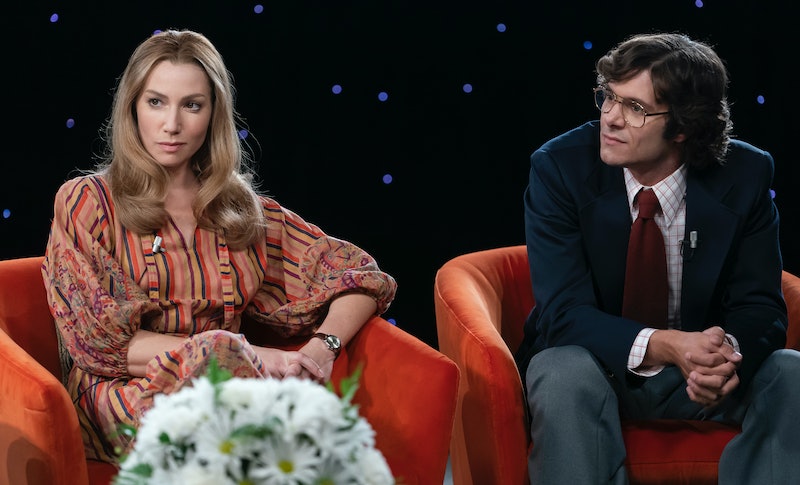 From Cate Blanchett and Uzo Aduba to Rose Byrne and John Slattery, FX's Mrs. America has an impressive amount of star power behind it. Enter Adam Brody's Mrs. America character, Marc Feigen-Fasteau, who is married to Brenda Feigen-Fasteau (Ari Graynor). Brody appears in Episode 5, when Phyllis and Fred Schlafly discuss feminism with the Feigen-Fasteaus in a televised debate.

And both Marc and his wife Brenda are based on real people. The couple met in 1967 at Harvard Law School and got married a year later, according to People. (His opening line, by the way, was "What do you think of the Schmerber case?") While they were dating, Marc showed his devotion by protesting Harvard's exclusively male squash courts until the athletic director agreed to let women play. Before that, Brenda had been disguising herself as a man in order to play, according to a 1990 L.A. Times article. As a result, some of his classmates began calling him "Mr. Feigen" (this was perhaps foreshadowing to 1971, when the married couple combined their names to Feigen-Fasteau).

In 1972, Brenda cofounded the ACLU's Women's Rights Project with Ruth Bader Ginsberg. She would also found both the Women's Action Alliance and Ms. Magazine with Gloria Steinem, per the L.A. Times. Marc was also involved in the cause for women's liberation: In 1974, he wrote The Male Machine, which examines toxic masculinity. In a foreward to Marc's book, Steinem describes Marc as a "spy in the ranks of the white male elite," per People. The feminist activist also called the Feigen Fasteau marriage a "good partnership — they can do together things they can't do separately."

The couple had a daughter, Alexis, in 1974. "Getting pregnant was a decision we backed into," Brenda told People. "We stopped trying not to get pregnant as hard, and so we got pregnant in a month." They later opened their own law firm, Fasteau and Feigen (they insisted that Marc was put first for strictly alphabetical reasons). "I will be able to know and enjoy my children," Marc told People, "in a way that is impossible for work-obsessed fathers with the sole responsibility for family support."

The couple divorced in 1987, per the L.A. Times, and Feigen tuned her attentions to becoming a Hollywood producer. She published her memoir, Not One of the Boys: Living Life as a Radical Feminist, in 2000. In 2008, Feigen married her longtime partner Joanne Parrent. As for Fasteau, he is currently married to an artist named Anne Gerard Fredericks, according to his Coalition for a Prosperous America bio.