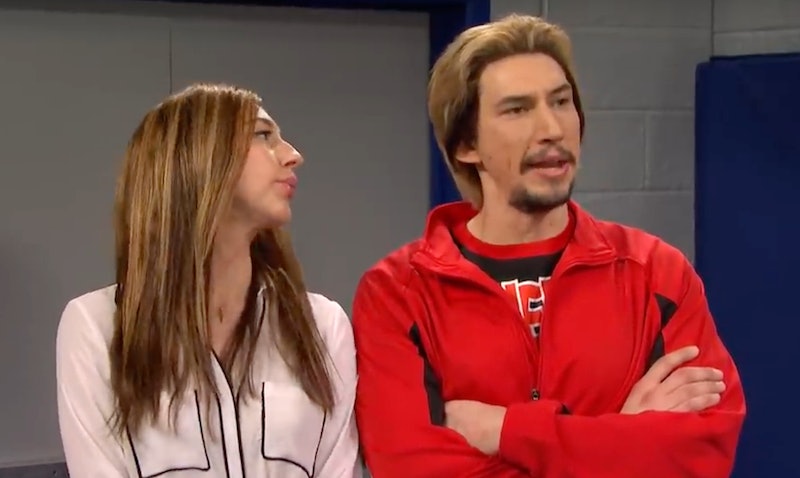 Monica’s influence is front and center on Saturday Night Live. Adam Driver’s Cheer parody on SNL is all about who makes mat. Driver, now a three-time host, returned to the SNL stage on Jan. 25 and took on the Netflix phenomenon that follows a group of college cheerleaders as they prepare to compete at a coveted competition. In the sketch that also featured musical guest Halsey, Driver and Heidi Gardner both play coaches who must decide which cheerleaders to put on the mat for the nationals.

In addition to all the mat talk, another common Cheer theme emerged in the sketch: injuries. Kenan Thompson, Chloe Fineman, Ego Nwodim, Beck Bennett, and Bowen Yang all portray competitive cheerleaders mirrored after the Navarro College students as they pine for a spot in the competition. In Southern accents that parallel that of Monica Aldama, the group’s indomitable coach, Driver and Gardner must deal with the team’s string of injuries.

“We throw people high, high, high in the air and sometimes we drop, drop, drop them," Gardner says in the sketch. “I cannot stress this enough: in this sport, it's the tiny girls' job to fly and the gay guys must catch them.” Driver adds in the parody, “Y'all gotta prove why you deserve to be on mat at Daytona!"

Nwodim, in a parody of breakout Cheer star Gabi Butler, made her case to be on mat and said, “I just wanna say I deserve to be here because I’m a cheer-lebrity. Y’all know I’m the face of Stanky Leotards, and chances are, the ‘tards you’re wearing are Stankys.” Elsewhere, Thompson, in a parody of Cheer’s fan favorite and expert mat talker Jerry Harris, said of his possibilities on the mat, “I’m always a maybe, I understand. Go team!”

Cheer debuted on Netflix in early January to positive fanfare. The six-part docuseries pulled the curtain back on the world of competitive cheerleading as it followed the Texas-based Navarro College cheer team and their journey to the National Cheerleading Championship in Daytona, Florida. On the heels of Cheer’s rapid rise to fame, its breakout stars Gabi, Jerry, Monica, and La’Darius Marshall appeared on Ellen on Thursday, Jan. 23 to discuss the impact of the show.

“When we first started the show, I was a little nervous, a little scared, because nobody really wants to talk about the bad things that have happened in their life," Marshall said. "After the show, I felt so much better because I got away from all my chains. I felt like I was being held down, and I felt like I was finally free.”

Cheer is available to stream on Netflix.

More like this
Kim Kardashian & Pete Davidson Reportedly Broke Up After Dating For 10 Months
By Grace Wehniainen
Move Over, 'Sunset'! The Drama-Filled Trailer For 'Selling The OC' Is Here
By Nola Ojomu
This 'Bridgerton' Polin x 'Love Island' Crossover Is Everything
By Darshita Goyal
Kanye West Has The Most Kanye Reaction To Kim Kardashian & Pete Davidson's Split
By Jake Viswanath
Get Even More From Bustle — Sign Up For The Newsletter