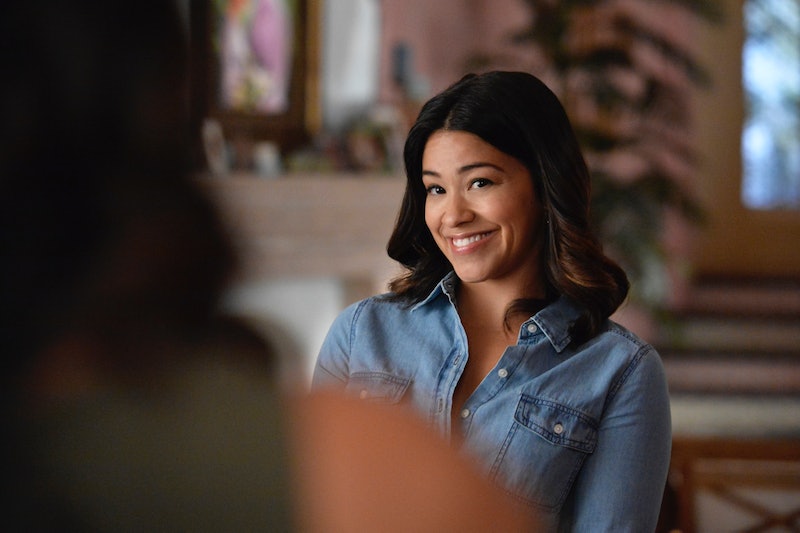 Love is definitely in the air on Nov. 9's episode of Jane The Virgin. With Jane's longtime best friend Lina (Diane Guerrero) and her fiancé Danny back in town for a murder mystery-themed bachelor/bachelorette party, naturally viewers expected some rocky-romance moments. When Adam comes out as bisexual to Jane on Jane The Virgin, Jane isn't quite sure how to handle it. But fortunately, the CW series uses this moment as an opportunity set the record straight on some common misconceptions and stereotypes about bisexuality.

At the start of the episode Jane, Adam, Lina, and Danny are all pow-wowing about the upcoming bachelor/bachelorette party, with Adam and Danny meeting for the first time. Well, or so fans thought. Jane and Adam's relationship seemed to finally be getting back on track, when a bombshell from Adam's dating past was dropped, sending Jane into a full out panic. Danny vaguely remembers meeting Adam back when they both lived in New York. He pulls out his phone to show Adam a photo. Pointing to the screen he asked Adam if he dated one of the people. Watching intently nearby, Jane and Lina quickly make their way across the room to get a peek at the picture. When Jane tries to confirm that Adam dated the woman in the photo, he nonchalantly states that had actually be in a relationship with the man.

After this, Jane spends the majority of the episode feeling paranoid, wondering if every time Adam looks in the direction of a guy if he is secretly wanting to run off with him.

Adam pretty quickly picks up on Jane's discomfort and becomes understandably annoyed. When Jane says she didn't understand because she "would never be attracted a woman," Adam swiftly reminds her that she doesn't necessarily know that. Jane has always assumed that her sexuality is very defined, but Adam discourages her from being closed off to another side of that sexuality. Later in the episode, it seems that Jane is attempting to open her mind. She ends up fantasizing about women and attempting to kiss Lina. Sexuality is a spectrum, and it's really cool that Jane The Virgin is taking the time to show that.

Eventually Jane makes her way to Adam's apartment, ready to have an adult conversation about her closed-minded response. She apologizes for freaking out and Adam sweetly answers her stereotypical questions, like is bisexual a just a stop on his way to coming out as gay? He quickly debunks this myth, emphasizing that being bisexual just means he's open to a connection with men or women. It's offensive to assume that bisexuals are gay people who aren't being honest with themselves, and Adam sets that record straight.

But the best moment of the episode comes when Jane mentions being insecure simply because she can't give Adam what a man could. Adam has the perfect response to that statement: Jane can't give him what another women could either. Checkmate. People are individuals, and there's no reason for Jane to suddenly feel jealous and possessive when she didn't appear to feel that way when she assumed that Adam was straight.

There's still a lot of work to be done with LGBTQ+ representation on TV. According to GLAAD, for instance, of the 895 regular characters expected to appear in TV shows over the 2016-2017 season, only 43 of them were identified as LGBTQ+. Good representation isn't achieved simply by putting these characters on screen, however. Often, their stories are told through a stereotypical lens lacking any real depth or understanding from the characters around them. This seems especially true of bisexuality, for a reason that Amy Zimmerman of The Daily Beast explained in a piece called "It Ain't Easy Being Bisexual On TV." Zimmerman wrote:

“Our mainstream media reinforces the notion that bisexuality is either a fun, voluntary act of experimentation or a mere myth through two tried and true tactics: misrepresenting and oversimplifying bisexual characters until they are either punchlines or wet dream fodder."

Fortunately, Jane The Virgin handles Adam's storyline sans ignorant jokes, unchecked offensive comments, and "funny" hysteria, even if Jane's initial response displayed her own misunderstanding of the sexual orientation. It's worth noting too that no one else aside from Jane — from Xiomara to Lina to Danny — batted an eye upon hearing about Adam's sexuality.

This kind of bisexual representation can help make the world a safer space for everyone, which means that this episode of Jane The Virgin is definitely one to celebrate.