Just in case you needed one more reason to love U.S. figure skater Adam Rippon, here it is. Before he made it to the 2018 Winter Olympics in PyeongChang, Rippon was skating at other competitions (obviously)... and he even sang while he skated at one. Yes, that's right, Adam Rippon performed a cover of "Diamonds" by Rihanna during an event, and his talent definitely goes beyond the rink.

While competing at the 2017 NHK Trophy in Japan, which is part of the Grand Prix of Figure Skating, according to Business Insider, Rippon decided to perform a song himself during one event. Microphone in hand, he took the ice to perform the hit Rihanna song, and although he's not a professional vocalist, he absolutely killed it. And the fact that he was singing live while skating made it even more impressive. Although the portion he sang wasn't officially judged, he ended up leaving Japan with a silver medal for the competition.

Rippon has been gaining fans left and right during the Olympics because of his personality and his feud with vice president Mike Pence, but the video of him singing and skating is going to make even more people love him. How could it not? 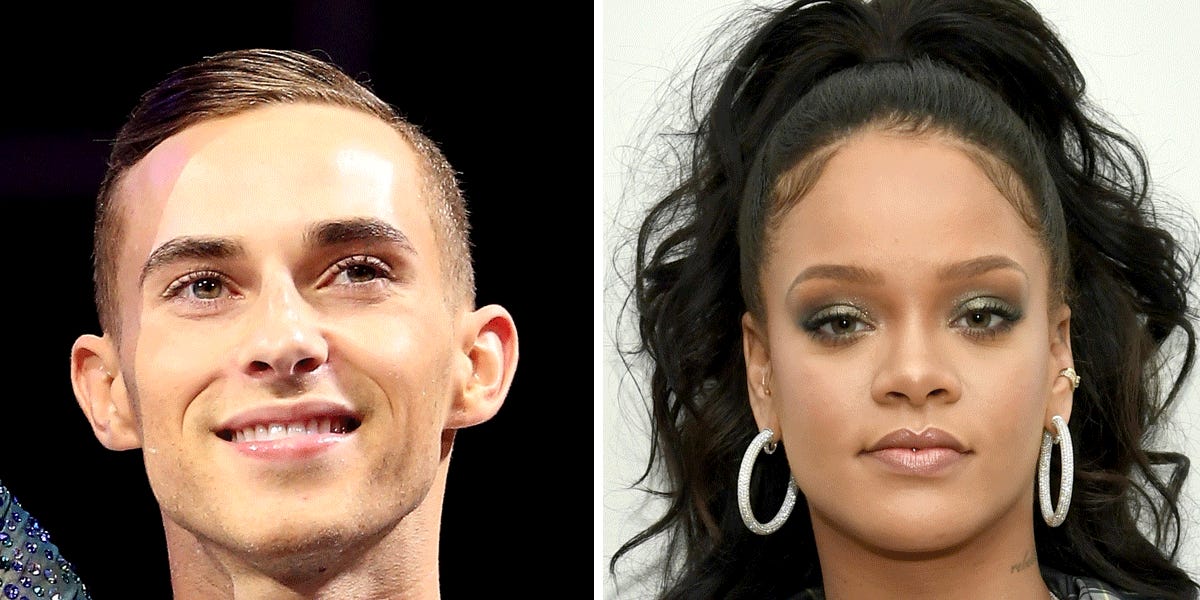 The NHK isn't the only time Rippon's performed the song, either. At a different event, he he performed it just as well. In the video below, at first, Rippon seems a little nervous as he greets the crowd, but he quickly finds his confidence, managing to do Rihanna's song justice. Toward the end of his performance, the original version of the song plays and Rippon pulls out all the stops, wowing the crowd.

Unfortunately, as amazing as his performance was at NHK, it didn't count toward his score. His "Diamonds" skate was actually part of his gala exhibition, which is when the highest scoring skaters get a chance to show off their moves in a fun, low pressure way, according to Rookie Mag. Skaters get to shine and have fun at the same time, without worrying about all the technical stuff, and it seems like Rippon really lived that part out to the fullest.

And seeing Rippon perform this song live (on multiple occasions) almost didn't happen in the first place. As he told Deadspin in an interview in December, he had originally gone into the studio to record the song, but when it came down to it, he had to go live... even though he had zero experience singing for a crowd.

He told the site:

"My own experience of singing in front of people was like I had none. But I always like to hear myself in the car, which I know is like that telltale sign of somebody who’s like f*cking awful, where you like hear yourself in the car and you’re like ‘I’m amazing’ but like you really you have the music turned up so loud that you’re just like hearing Whitney Houston sing but it’s covering up your own flat notes.”

Well, that might just be the most relatable thing an Olympic athlete has ever said, because who hasn't felt like a Grammy winning artist in the car while also being absent of all musical talent in reality? Answer: every person ever.

And on the subject of performing live in front of thousands of people as his musical debut? Rippon sounds pretty proud of that, too.

“The first time I ever sang in front of a crow of people was like 10,000 people in Japan at a skating exhibition," he said. "I'm having a boy band moment."

Um, yeah he was. Sadly, though, he decided against showing off his vocal chops at the Olympics this year. On Sunday, he skated to "O" by Coldplay and “Arrival of the Birds/Exodus” by The Cinematic Orchestra during the team event, which is a big deal, since it's the first time the Winter Olympics have allowed songs to be played with lyrics during skating. Rippon definitely took advantage by injecting a little Chris Martin into his routine.

Rippon still has a couple of events left, though, so maybe he'll surprise us all and sing along a little. Whatever comes next for him is going to be so much fun to watch — whether or not Rihanna is involved.