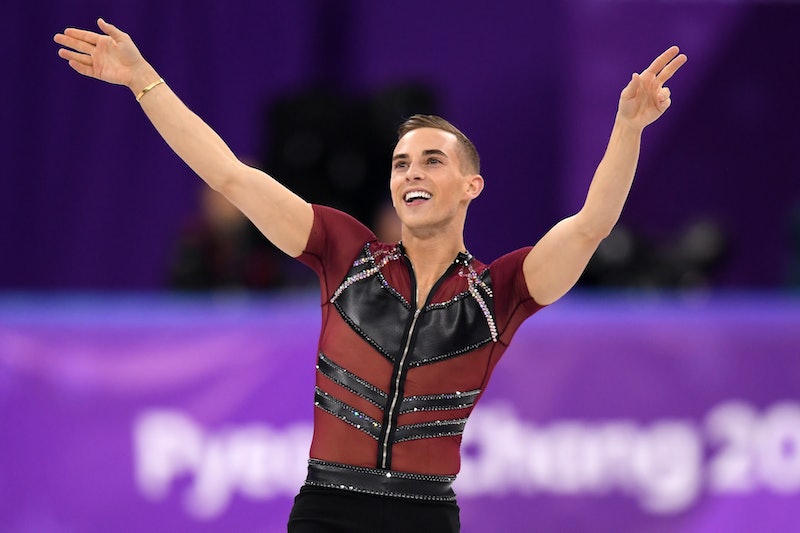 After performing a must-watch men's short program that aired Thursday night and currently has him standing in seventh place, Adam Rippon is blaming "witchcraft" for how well he's been doing at the 2018 Winter Olympics. After NBC Sports anchor Andrea Joyce asked him to explain what it's been like skating as great as he has been (he even scored a bronze medal for USA's team figure skating event), he replied, "I can't explain witchcraft." He then added, "I just feel like I'm coming into my own. I'm confident in who I am and what I'm doing. I'm just having a great time."

Well, he's not entirely wrong, because as those who've been following Rippon, know he truly is pure magic. From his fabulous skating programs to his eye-catching interviews with NBC Sports, the 28-year-old Olympian continues to prove just how bewitching he really is. If you haven't watched him skate or any of his interviews with Joyce and sportscaster Mike Tirico, then you really need to set aside some time to do so.

His interviews are just as captivating as when Rippon is smoothly skating across the ice with confidence, ease, and perfection. For example, he also said the following to Joyce about his first men's short program, "I was nervous as hell, but, I went out there and I was like, Adam, Andrea's watching, and you gotta do this for her, because she's wearing a statement necklace and you're at the Olympics."

If that's not enough, Joyce also mentioned how Rippon's received a ton of support, like from Reese Witherspoon and Elmo, and asked him what it means to him. Of course, he nailed his response by saying, "Well, you know, on the spectrum from Reese Witherspoon to Elmo, I'm excited at about like a Meryl Streep." He then asked Joyce, "Does that make sense?" She replied, "Maybe." It may not have made much sense to her, but it really does actually make a lot of sense. Fellow Streep enthusiasts get it, Rippon.

Since then, fans have taken to Twitter praising his most recent interview and his "witchcraft" comments.

He Is So Loved

A New Statement For Everyone

A Magical Human Being

He Needs His Own Show

He's What This Country Needs

*Trying To Find A Way To Credit Witchcraft*

Even after skating during USA's team event (which he totally nailed), he spoke with NBC's Tirico and said something nobody probably expected to come out of his mouth. Tirico asked him, "On the ice, you see the rings, what’s going through your mind?" Rippon replied, "I want to throw up. I want to go over to the judges and say, 'Can I just have a Xanax and a quick drink? I’ll be fine.' But I kept it together."

Yes, he said that and it was hilarious. As one Twitter user reacted, "Adam Rippon is exactly what America needs. Just straight up asked for a Xanax and a drink on national television." No one probably expects an Olympic athlete to respond this way during an interview, but Rippon isn't just anyone. Plus, there isn't only one type of person who makes an Olympian. That's something Rippon has proven during his time in PyeongChang.

Not only are Rippon and Olympic skier Gus Kenworthy the only openly gay athletes at this year's Olympics (and making history and inspiring along the way), but Rippon's made headlines for his so-called feud with Vice President Mike Pence. The White House chose Pence to lead the official U.S. delegation for the Winter Olympics opening ceremony, which Rippon was opposed to due to Pence being considered an opponent for the LGBTQ community after signing the Religious Freedom Restoration Act when he was governor of Indiana.

There's been a lot of back and forth between the two, but, on Feb. 8, Pence tweeted Rippon, ".@Adaripp I want you to know we are FOR YOU. Don’t let fake news distract you. I am proud of you and ALL OF OUR GREAT athletes and my only hope for you and all of #TeamUSA is to bring home the gold. Go get 'em!"

Rippon's opposition of Pence quickly became news and has somewhat taken center stage. But, that's not what the figure skater wants. "I have no problem talking about what I've said because I stand by it, but I think right now the Olympics are about Olympic competition and the athletes involved," Rippon said at a press conference Tuesday (via ABC News). "I don't want it to distract from them, and I don't want my Olympic experience to be about Mike Pence. I want it to be about my amazing skating and being America's sweetheart."

That's something he's successfully managed to do. Rippon, America's current sweetheart, is now known and beloved for his "witchcraft".