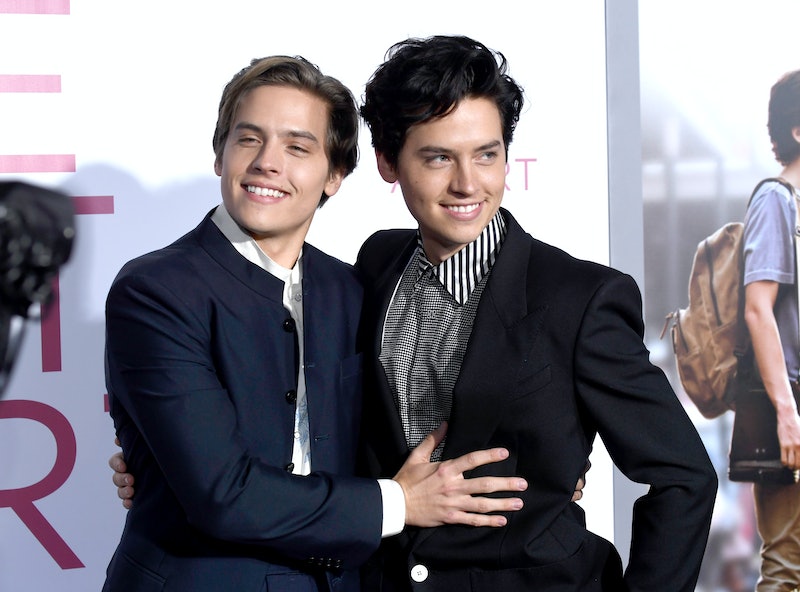 Adam Sandler got a taste of the Suite Life before Cole and Dylan Sprouse ever had their Hollywood glow-up. Sandler recalled working with the Sprouse twins during the 1999 comedy Big Daddy. On the cusp of its 20th anniversary, Sandler opened up about what it's been like to watch Cole and Dylan's journey from child actors to certified heartthrobs.

At the premiere of his upcoming Netflix movie, Murder Mystery he talked to Entertainment Tonight about working with the twins as kids, when they shared the role of Julian "Frankenstien" McGrath, a boy left on the doorstep of Sandler's character Sonny. And his reaction to their teenage transformation is seriously relatable. "I remember the boys," Sandler told ET. "I remember Cole and Dylan being great little boys. When I see them now, I'm baffled at how they grew into handsome bastards." (Us too, Sandler. Us too.)

The 50 First Dates actor isn't the only performer who can speak on the Sprouse twins' rise to fame. Cole and Dylan starred in multiple memorable projects as kids. Cole played Ben, the son of Ross (David Schwimmer) and Rachel (Jennifer Aniston) on Friends, while both brothers starred on their Disney Channel series' The Suite Life of Zack and Cody and Suite Life on Deck with co-stars such as Ashley Tisdale.

On an episode of E!'s LadyGang in early May, Tisdale was asked by co-host Keltie Knight if she knew that Cole Sprouse was going to "turn out to be such a babe." Like most of us, the High School Musical star had no idea. "I did not think that they were like...I mean they were so cute," Tisdale began her answer. "But they never grew when we were on the show. When they got older, I was like, 'Oh my gosh.' I had to kiss one of them and it was like so..." Which Sprouse twin, you ask? For those looking to do a casual Suite Life deep dive (and who isn't, really?), it was Zack (Dylan Sprouse) in Season 1, episode 13 of Suite Life on Deck.

But for as many times as former co-stars can reflect on working with the Sprouse twins, Cole and Dylan harbor some memories of their own. In March 2017, Cole revealed to the New York Post that while filming Friends, he nursed a bit of a crush on the one and only Aniston. "I had a really, really hard time working with Aniston because I was so in love with her," Sprouse said. "I was infatuated. I was speechless — I'd get all bubbly and forget my lines and completely blank … It was so difficult."

But the Riverdale star also admitted that he's not kept in touch with the cast for a pretty understandable reason. Sprouse told the outlet, "If I saw any of them, I'd say, 'Hello.' But it's been a while and I certainly don't look the same, so it'd be a hard sell. And if I did look the same, that'd be a little disconcerting."

Clearly, several celebrities are recognizing the Sprouse twins' ascension to stardom — and coming to a similar conclusion. Cole and Dylan are all grown up.

More like this
Paul Mescal, Man Of Mystery
By Samantha Leach and Heather Hazzan
Olivia Wilde Addresses *Those* Florence Pugh & Shia LaBeouf Rumours
By El Hunt and Sam Ramsden
Here’s Everything Coming To & Leaving Netflix In October
By Jake Viswanath
Twitter Is Unravelling Over Wolverine’s Return For 'Deadpool 3'
By Darshita Goyal
Get Even More From Bustle — Sign Up For The Newsletter