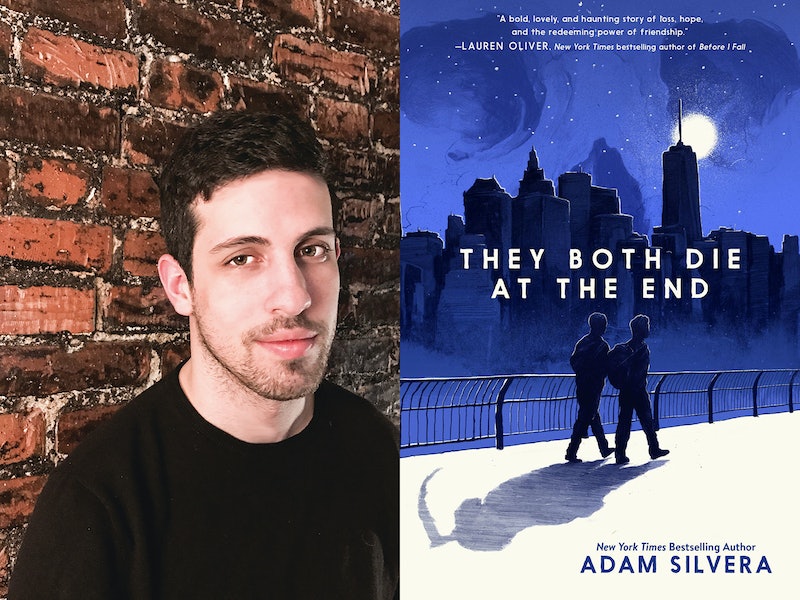 Young adult literature fans already know about author Adam Silvera’s reputation for writing sad stories. From his 2015 debut, More Happy Than Not, to his sophomore release, History Is All You Left Me, Silvera has given us characters that struggle against themselves and their circumstances, lead lives that are filled with heartbreak and pain, and face odds that can seem insurmountable. For fans who were hoping for something decidedly more lighthearted in his most recent release, They Both Die At The End, well, the title should be an indication that’s not exactly what Silvera has in store.

"These tearjerkers are always reflective of where I am in my life, and understanding that I'm not alone in my thoughts or my heartbreak or my confusion or my fear. I have never written the kind of happily ever after where you close the book and feel this burst of happiness," Adam Silvera tells Bustle. “There are so many authors who accomplish this way better than I ever can. I play to my strengths by turning my weaknesses into victories, even if it's not the sort of win you'd want for the character you've been hanging out with for 300 pages. It's still real, though, and I hope any readers who can relate feel stronger and hopeful after.”

And it’s that message of hope that comes across more than ever in They Both Die At The End, which follows two teens, Mateo Torrez and Rufus Emeterio, during their “End Day.” In a future version of our world where an organization called Death Cast can accurately predict the day you will die, Mateo and Rufus are brought together by the Last Friend app, through which they meet up for one final day of adventure. But, perhaps because we already know how this will all play out, Silvera was able to focus fully on the lives these characters have lived, and more importantly, still have left.

They Both Die At The End by Adam Silvera

Of course, that’s the purpose of Death Cast — to allow people the chance to live their last day to the fullest. And it’s the second time Silvera has utilized future technology that greatly affects his character’s personal lives. Where the Lateo Institute in More Happy Than Not takes away memories, but tries to give people a better life, in They Both Die At The End Death Cast takes away life, but with that information gives people a chance to really live, too.

"I was very paranoid about my own mortality a few years ago when I had this thought about what life would look like if we could have a heads-up on when we're going to die. How we would move through the world and if we would make the right choices and if it's possible to wrap up your life on such short notice," Silvera says.

It's an interesting theme that connects the two stories, but it's also one that reveals Silvera's penchant for writing emotionally driven speculative fiction over more traditional sci-fi. Taking the 'What If' question that drove him as a young fanfiction writer, he now reimagines the world in ways that are disturbingly, yet comfortably, close to home. Think more "robot buddy" than "robot destroys the universe."

"No matter how high-concept the stories are," Silvera says, "I want them to feel realistic."

That realism, and heart, pushes They Both Die At The End into the sort of life-affirming territory we haven't seen from Silvera before. As Mateo and Rufus explore their thoughts on family, love, legacy and friendship, there is sadness, of course, but it is tinged with a hopeful undercurrent that is surprisingly uplifting. Both Rufus and Mateo spend a lot of time working through their fears and emotional baggage; Mateo with his debilitating anxiety, Rufus with his grief and unresolved guilt. But both boys, too, insist on making the most of the time they have left living, not wallowing.

A big part of that has to do with the addition of many background characters; best friends and romantic partners and family members, as well as the stories of others in the city surrounding the teens during their End Day. In They Both Die At The End, the feeling of community, and connection, is incredibly strong. The result is that the book is less about two people dying and more about exploring the reasons we live: for the people we love, for the experiences we seek, for the chance to leave a meaningful legacy, however small.

And it's that which Silvera wants readers to walk away from the book with. Not with a sense of overwhelming sadness or fear, but of resiliency and bravery; and it's a message that flies boldly in the face of what readers might have expected: live each day to the fullest, do the brave thing, love each other. It's nothing we haven't heard before, but in Silvera's hands it takes on a whole new meaning. Because he doesn't ignore the hard truths of life here; he just insists on writing past them...in the hopes that we can live past them, too.

"It's so easy to think something is life or death, but when death is actually on the table, I'd imagine we'd all prioritize our lives very differently. If I found out I had less than 24 hours to live, I would immediately stop caring about the things that currently keep me up at night," Silvera says. "I would make amends with friends, I would tell people I love them, I would donate my money somewhere needed. I wouldn't care about a bad book review or how many copies my books have sold, I would simply be happy that I wrote books that make me proud."