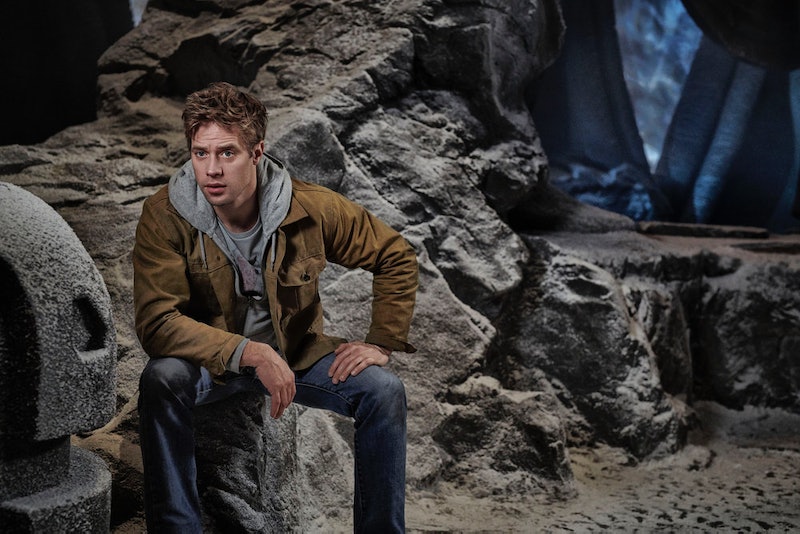 Spoilers for the Krypton premiere. One of the most captivating things about Krypton is that while the legacy of Superman's home planet is legend, most of its inhabitants are anonymous. So the series is working with a bit of a blank slate, focusing on the grandparents of the familiar heroes and villains in this universe. However, a few characters that you may recognize to make an appearance on the SyFy series. For example, Adam Strange on Krypton is a DC comics character who has found himself in a... bizarre new world.

In the pilot episode, Seg-El encounters this hoodie-wearing Detroit Tigers fan after discovering that the stranger has been following him. Strange (Shaun Sipos) tells Seg not only that he is from the future, but that someone else from the future is coming to destroy Krypton. That villain, by the way? None other than DC comics' Brainiac. Why is that a problem, since we all know that Krypton gets destroyed anyway, thus propelling Kal-El as well as Kara Zor-El and a few others to Earth in the first place? Because this villain wants to prevent the Kryptonian who will be Superman from being born in the first place. Strange gives Seg a "sun stone" key to the local Fortress of Solitude in order to stop Brainiac from doing so. Later, they reunite at the fortress, and Strange tells our hero that he needs to finish his grandfather's research in order to save the planet (temporarily, but we're not talking about that) and Kal-El's future.

Strange also whips out a deteriorating Superman cape, which he refers to as an hourglass, but it's more like a Back to the Future photograph or a Beauty and the Beast rose. If the cape vanishes, they've run out of time, and Superman has been erased from existence. So, not only is the time traveller from Earth a fish out of water on Krypton, he comes with some pretty high stakes and lofty expectations for its people.

In the comics, Adam Strange is a hero in his own right. A human transported to another planet called Rann during an archaeological dig, he's like an alternate version of Indiana Jones And The Crystal Skull — because, in case you forgot or put it out of your mind, that movie is about aliens — and immediately made the new planet his home. He took up arms, got married, and became kind of an interplanetary ambassador, partially because he has to return to Earth from Rann every year to keep from dying. He's not an enhanced human, but his archeological interests make him an excellent scholar of ancient cultures on any planet, and he does have technologically advanced vision as well as a jet pack. The character has also been compared to John Carter and Buck Rogers.

Strange isn't known in the comics as one of Superman's friends or cohorts. He declined an offer to join the Justice League, but did work with a Green Lantern at one time. It's an interesting choice to add him to this Superman prequel show, but a fun one nonetheless. Even though this character is somewhat familiar to DC comic fans, Krypton has created its own version of him, to put into an unfamiliar context. There are plenty of changes to his comics origin story, starting with the fact that this is a mission, not an accidental voyage. And he's also serving as the audience stand-in. The society on Krypton involves a caste system, religion, and a lot of laws that are downright dystopic. Adam is experiencing them along with us, for the first time.

Is it a little weird that Adam Strange shows up on Krypton and starts telling Seg about his future grandson? A little, but this is also a planet where you and your partner can get your fingers pricked and learn about your offspring's entire life. Seg learned about his son Cor-Vex (who is not Superman's father Jor-El, by the way) with Nyssa, and Strange is challenging that future. It'll be interesting to see what else from the comics Adam Strange has in his pocket, and what else is in store for him as well.