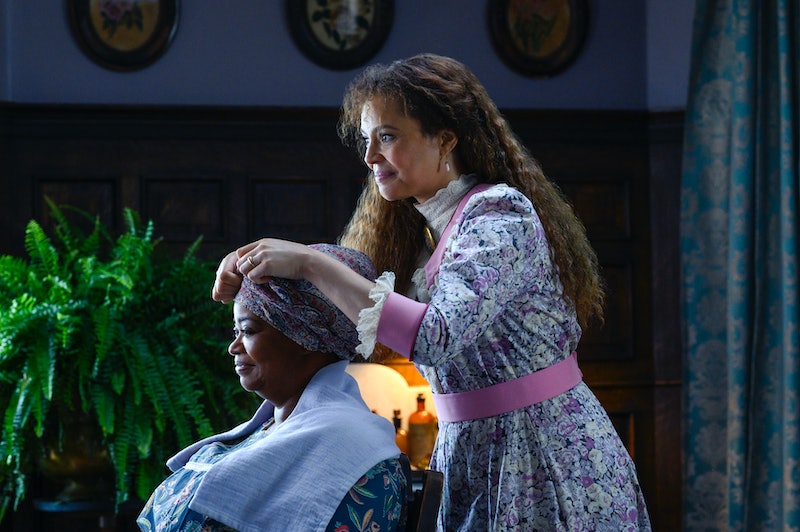 Spoilers ahead for Self-Made. Although Addie Monroe helped Madam C.J. Walker grow her hair back and gain confidence, the majority of their relationship in Self-Made is dominated by their intense business rivalry. Carmen Ejogo's Addie Monroe in Self-Made is based on the real-life figure Annie Turnbo Malone. Like the four-part Netflix miniseries shows, Malone had a successful haircare business that Walker was involved in before she began her own empire. But from there, Self-Made gets a little less factual and a whole lot more dramatic.

As it goes in Self-Made, Walker wanted to become a salesperson for Monroe's haircare products because of how they had helped her hair health. But Monroe cruelly rebuffed Walker — even after she had successfully sold 20 tins of her products. Ejogo's Monroe disparagingly viewed Octavia Spencer's Walker as only a washerwoman who wasn't attractive enough to peddle her merchandise. Refusing to be disrespected, Walker created her line of products that were based on Monroe's recipe. But even after moving from St. Louis to Indianapolis and achieving business success, Monroe was a constant presence in Walker's life — attempting to undermine the entrepreneur who became known as the first female self-made millionaire in the United States, according to Guinness World Records.

Self-Made is Madam C.J. Walker's story and it's based on a book by Walker's great-great-granddaughter, A'Lelia Bundles. So, understandably, Walker is the hero of the story. But it's not wholly accurate to depict Malone as a villain (which probably explains why the series changed her name).

As the National Museum of African American History and Culture documented, Malone created her haircare products, including her "Hair Grower," around the turn of the 20th century. Her products helped improve scalp health, promoted hair growth, and — for better or for worse — straightened hair to help black women fit the societal beauty standards of the day. She had early success in Illinois and then moved to Missouri in 1902 where she founded her company Poro. Through Poro, she employed sales agents to sell her products and Madam C.J. Walker was one of her salespeople.

Walker moved to Denver, Colorado, where she still sold Malone's Poro products. According to Walker's biographer and ancestor Bundles, the move to Colorado was when the two women entered a dispute. "Not long after she married Charles Joseph 'C.J.' Walker in early 1906, there was a rift of some kind between the two women that caused Madam Walker to sever ties with Malone. By April of 1906 Madam Walker was selling her own line of haircare products," Bundles writes on her website.

From there, it seems they each embarked on their separate careers specializing in haircare for black women. Walker opened up a cosmetology school in Pittsburgh in 1908 named after her daughter Lelia and then made Indianapolis the headquarters of Madam C.J. Walker Manufacturing Company in 1910. Malone appeared to stay in Missouri where she opened up the Poro College in St. Louis in 1918. Like Walker, Malone provided training, jobs, and products for the black community and also was a philanthropist. The Annie Malone Children & Family Service Center in St. Louis still exists today. Walker died in 1919, but Malone lived until 1957. In the 1950s, more than 30 branches of the Poro College existed in the U.S.

Vox claimed that Malone was really the first female self-made millionaire in the U.S., not Walker — a claim that Bundles refutes. But beyond discrepancies like that, the nasty rivalry between Monroe and Walker in Self-Made seems to exist to add drama to the miniseries. Although there is some nuance to their relationship in the show, with Monroe supporting Walker at Booker T. Washington's conference, it mostly paints Monroe in a very unflattering light — even when Walker finally admits to stealing Monroe's recipe in the first place. But when it comes to real history, there's no need to choose a side between these two early 20th-century black female entrepreneurs in the beauty industry.