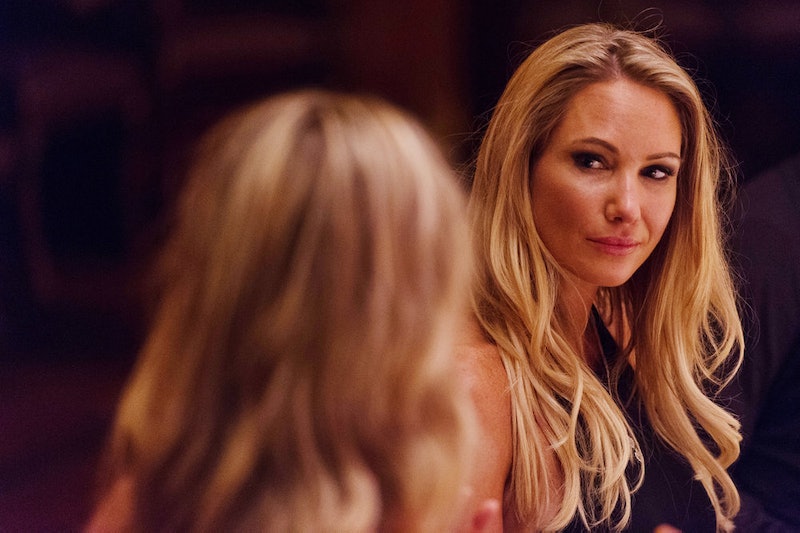 When Ladies of London Season 3 began, viewers were introduced to new cast member Adela King. She came on as Caroline Stanbury's close friend of 20 years, but left her own impression by season's end, mainly thanks to her openness. And King doesn't regret being so open about her struggles, she tells Bustle over the phone.

"You know what? I really don’t," she says about whether or not if she has any regrets about her time on the show and her blunt honesty. "On the show, I don’t say anything I don’t mean. I genuinely do mean everything that I say. I may not feel the same way today, but at the time, that’s exactly how I felt and I said what I thought. I don’t have any regrets. I was as honest as I could be. I was exactly who I was."

In my opinion, she is one of the most relatable, strong-willed, and vulnerable women yet who has appeared on the Bravo series. She never hid her true self, including being a recovering alcoholic, having attempted suicide, and the fact that she hasn't seen her children in several years. King put it all out there for the world to see and she isn't ashamed of it one bit.

"I took a risk there, but I didn’t actually think of it as a risk," she says about her openness. "I am just like that. That’s what was going on in my life at the time. It is a reality TV show and I can’t hide it. That’s my DNA. That’s how I’m made up." She didn't open up about her issues to garner sympathy or because she was expecting something in return; she did it because that's who she is and how can you film a reality show if you're not going to be honest? "I wasn’t actually choosing to share anything," she says. "I’m just telling you like it was."

For some, addiction isn't something they'd want to share on camera, but the same certainly can't be said for the shoe designer. She won't mask who she is and the battles she continues to face daily. "I am an alcoholic," King admits, like she did on Ladies of London. "I have struggled with alcoholism and addiction for over 20 years. I have been in rehab. I am very vocal about it, because I’m not ashamed of it."

King wants others, who may not understand what it is to be an addict, to know that she and other addicts are not bad people, they are just in pain. "All alcoholics and addicts have a really bad rep," she believes. More often than not, King says addicts are also made to feel bad about who they are and what they're doing. She explains,

When it comes to the one thing she wants others to know about addiction, King says, "Every single addict is suffering from sort of pain that they are trying to escape from. I think that is one of the most important things to learn about an addict." She continues, "It’s not a cry for help, but there is something wrong and you’re wanting to escape from something."

One of the other things she's been very open about is that she hasn't seen her children throughout her current custody battle with her ex-husband. Unfortunately, King says nothing much has changed since Ladies of London, and she still hasn't been in contact with them. "I haven’t seen or spoken to them," she admits. "It’s as painful as the day it happened." She adds, "It’s hard. It’s really hard. I feel so helpless and I feel so frustrated. I don’t know why or how much longer this can go on for." Though, King says it's helpful when she has so much love around her to get her through the tough times.

Speaking of those tough times, King faced one of her hardest moments when she tried to kill herself awhile back after realizing she may never see her children again. It's something she discussed on the show and which garnered what some may describe as an unsympathetic reaction from her co-star Juliet Angus.

After revealing during a dinner that she had attempted suicide, Angus said it was "selfish" of King. Actually, King also believes that suicide is "selfish" and isn't going to be angry at Angus for how she feels. "A lot was made of Juliet reacting in that way to me, but I also do respect the fact that people who haven’t walked in your shoes do not understand," she says. "It is a selfish act, of course it’s a selfish act."

King wants others to realize that the decision to kill yourself comes at the lowest point in your life when you think you have no other way to escape your pain. She says,

"When you’re in it, the darkness is so bad you just can’t see the light. Of course someone who doesn’t suffer from addiction or hasn’t been through the amount of pain that the rest of us who have tried to take our lives have been through, of course they’re not going to understand it and of course they’re going to think it’s selfish."

You have to admire King's openness and the fact that she's shining a light on addiction and mental health and the stigmas that come with them. It's refreshing to see a Bravolebrity trying to educate others about the life or death issues that many face every day of their lives.

"I learned that I wasn’t alone and I wasn’t a bad person, which I have felt for so many years now," she says about her time in rehab. "It’s amazing, because so many people were wrong. They’ve always said to me all my life, you share too much, you’re too open, you’re too honest. Well, you know what, if it helps so many people, then I am so glad I am."

Here's hoping King never stops staying true to herself or being so open, because she really is doing good in this world.