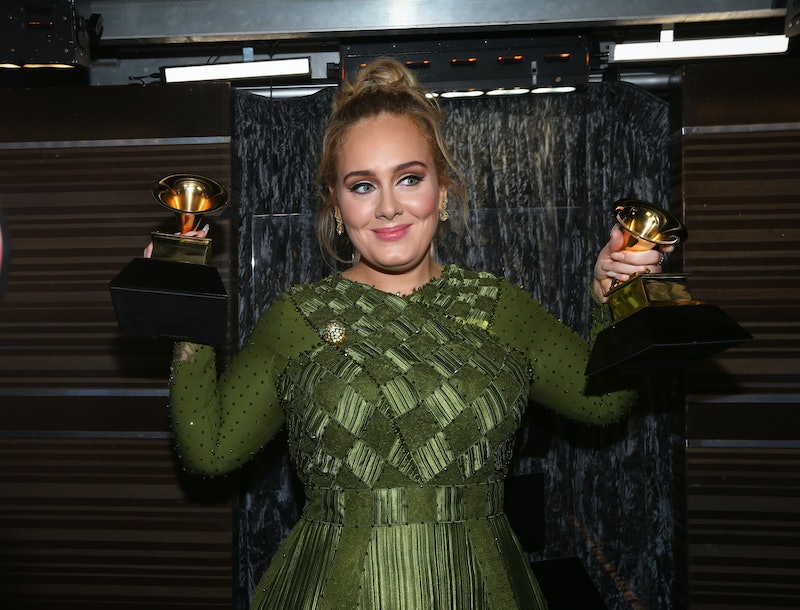 There's not much this Grammy-award winner can't do: On Saturday, Adele officiated her best friend's wedding and performed a medley of hits for the crowd, as per People. The "Hello" singer declared BFF Laura Dockrill and musician Hugo White wed at the Mason Arms Pub in London. Later, Adele also performed a handful of songs, including her own mega-hit, "Rolling in the Deep," and The Spice Girls, "Spice Up Your Life." Dockrill, Florence Welch, and several other party-goers joined the star on stage during the festivities.

Guests captured footage of Adele's performance, sharing a video of her belting out "Rolling in the Deep." For the wedding, Adele wore a festive floral skirt for the event, while the bride opted for a colorful floor-length dress. Musician Grace Savage shared videos of Dockrill and Adele on stage together on Instagram, including the two singing "Spice Up Your Life." She captioned one video, "The way you grab that mic @laureleedockrill What a moment @adele." Over another moment where Dockrill and Adele performed a duet, she wrote, "what a wedding/awards ceremony."

On Instagram, Dockrill posted a photo of herself kissing her husband, and the singer can be spotted dancing in the background. It's no surprise the Grammy-winner played such as central role in the ceremony — Adele and Dockrill grew up together, and the song "My Same" on her album 19 is about Dockrill, according to E! News.

Adele's performance at the wedding is a rare appearance for the singer, who keeps her personal life private and has stepped back from concerts in the past couple of years. Her last full concert was at Wembley Stadium in 2017, as per E!. But the singer has made several public appearances as of late, reportedly attending Guy Oseary’s Oscars after-party, and sparking album rumors after a beach day with Harry Styles.

Dockrill and White's wedding is not the first time Adele, who is ordained, married two of her friends. In January of 2018, Adele officiated comedian Alan Carr's wedding to Paul Dayton, according to Vanity Fair. During an appearance on the British daytime talk show This Morning in April of that year, Carr discussed how special the singer made his big day, as per the outlet. "She’s known me and Paul for ages and she said, 'I want to do your special day. Let me do everything,'" Carr said. "And she did everything, she got ordained and she married us.”

From officiating the ceremony to bringing the party with a medley of pop hits, Adele appears to be an ideal wedding guest. It doesn't seem like the last time the singer will wed one of her friends, and hopefully for fans, it won't be the last time she performs a raucous rendition of "Rolling In the Deep", either.