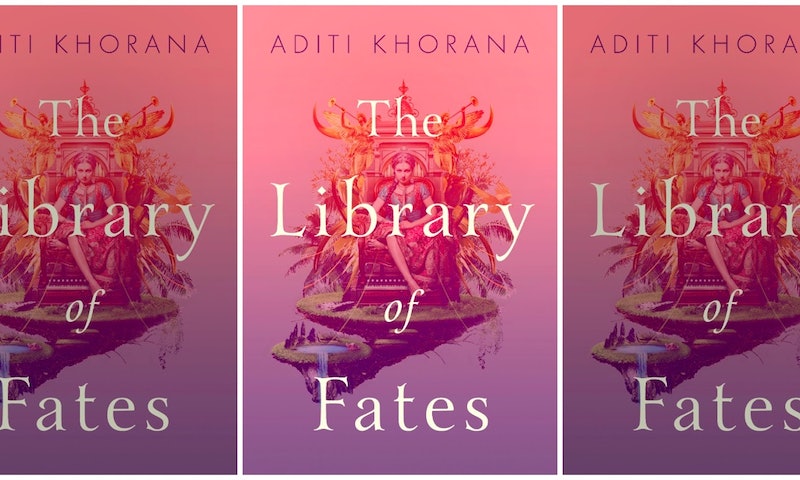 It's the rare young adult fantasy book that takes its inspiration directly from myth and legend and then melds it together with truths, both harsh and beautiful, from our own reality. And that is what Aditi Khorana has succeeded in doing with her latest release, The Library Of Fates. It blends Indian folklore and fantasy with historical references (think mentions of The Silk Road and countries like Syria, along with fictional kingdoms like Shalingar, and, of course, lots of magic) for a book that is at once recognizable and unique.

"I borrowed a lot from different traditions and different eras. Shalingar doesn't exist because there is no mythic utopia in the world, no society or kingdom or culture I could find that hasn't engaged in some sort of transgression against the rights of some population of people," Khorana tells Bustle.

The novel follows Princess Amrita of Shalingar, an idylic kingdom that, so far, has been immune to the violent conquests of Emperor Sikander of Macedon. But soon the unthinkable happens, and Amrita finds herself a fugitive, alone in the world but for an oracle named Thala, who was kept by Sikander as a slave and managed to escape amid the chaos of a palace under siege.

With nothing and no one else to turn to, Amrita and Thala are forced to rely on each other. But while Amrita feels responsible for her kingdom and sets out to warn her people, Thala encourages Amrita to go on a quest to find the fabled Library of All Things, where it is possible for each of them to reverse their fates.

"What I really wanted to explore was the intersection of colonialism and feminism. Colonialism as the attack, capture and erasure of a native land and its culture, and feminism as [the] radical," Khorana says.

And it is, in fact, the feminist action of Amrita's opposition to being handed off in marriage to Emperor Sikander that sets the story in motion. But that theme carries throughout the novel as both Amrita, and especially Thala, come to grips with the realities of their respective kingdoms.

"While I was outlining The Library of Fates, I turned to the Greek mythology I read [in] high school. Here's what I learned: much of the structural sexism that has been codified by our society is presented as the basis of Greek myth," Khorana says. "We need to rewrite myth if we want to see a different society. I wanted to create female characters who are flawed, yes, who want to give up and get angry with the system and with their own fate. But they keep fighting. They subvert the institutions that don't serve them, that actually actively oppress them, because this feels true to me."

Another aspect of the book that feels true and close to Khorana's heart is the idea of movement and removal. We see this in both Amrita's fear of leaving Shalingar for Macedon and Thala's more violent removal from her own homeland. Khorana has spoken before about her own experiences with feeling like an exile in her own country, straddling the lines between cultures and her family's journey from Pakistan to New Delhi, living as refugees.

"Movement, loss—and particularly the loss of home—are significant issues of our time. In 2015, the UN High Commission for Refugees reported that 65.3 million people were displaced that year. In the future we will have millions of climate refugees. So an experience that we think of as rarefied will play a bigger role in our lives one way or another," Khorana says. "Aside from being the descendant of refugees and an immigrant myself, I've also spent my life moving from place to place, so starting over and finding myself anew are a familiar part of my experience. That feeling of home is a privilege and I never take it for granted."

Though these big questions of colonialism and feminism, both practical and philosophical, might be the main exercise of Khorana's book, they are not the only cause of action. The idea that every decision leads to something, that there are hundreds of possibilities for the future based on every choice we make or don't make, is explored through the prism of love here in particular: selfish love, love sacrificed for the greater good, and love reborn from that sacrifice; and it is this that leads Amrita to her future.

"One of the big questions that I'm always pondering is: when is it appropriate to compromise and when is it not? Some of this is tied up in my own gender and the cultural expectations we have of women. Without being overly moralistic, I wanted to write a story in which there are consequences to the compromises made out of fear, greed or a need for control. And I wanted to see a world in which the compromises made for real, true and honest love were rewarded—even if those rewards didn't look the way we expected," Khorana says.

And the most unique aspect of all? All of this is done within one book; written almost as a parable, a digestible fantasy story that teaches a lesson, uses time-tested myth and folklore, and gives the reader closure, in this case, all within 300 pages. In the time of fantasy series that can continue on for multiple books, why did Khorana decide to write The Library of Fates this way?

"As much as I love a good, hearty epic, I don't have the kind of mind that can sustain a story for three or more books, though I have so much admiration for those who do," she says. "After I'm done with a novel, I usually want to explore different or tangential ideas through different characters. Maybe it has something to do with moving around a lot as a child? I want to keep moving through different stories and different ideas and themes? I don't know!"

That's good news for fans who are desperate for the next Khorana novel, though. And if you love the feminist aspect of The Library of Fates, you're going to want to her next one which she says is a "[contemporary] experimental feminist fiction...that challenges the conventions of the novel, as well as the conventions that women are often forced to abide by." All we've got to say is: when can we preorder?