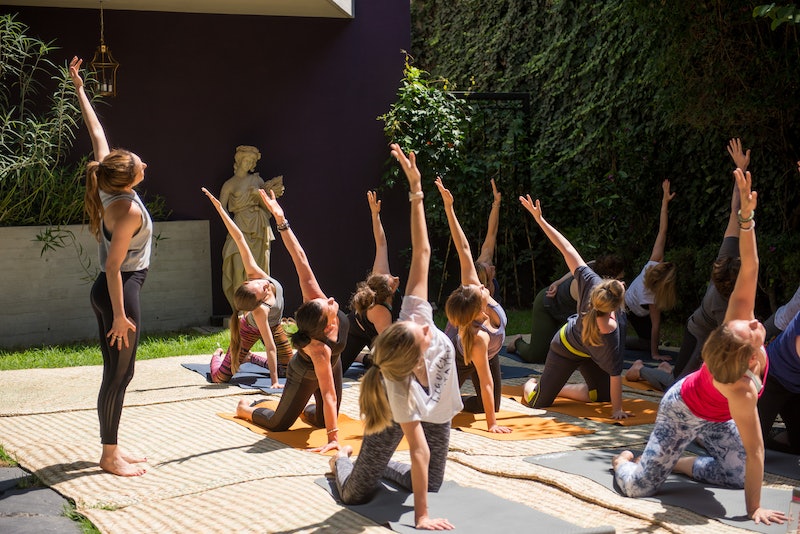 Courtesy of Yoga With Adriene

It all started when I woke up on New Year’s Day in 2018, and thought about what I wanted to focus on that year. For me, that was learning Spanish. I’d always wanted to do it throughout my 20s and now in my 30s, but when I woke up this day, all the excuses I’d made for myself — money, time — just went away. So I registered for a local class in Austin, Texas, where I live. I’d work all day, then go twice a week at night and again on Saturdays. The class ran for six weeks before taking a break, and I thought, What am I going to do during this break? I was single, working on Yoga With Adriene, and it occurred to me: Why don’t I go to Mexico?

I’m half Mexican, but my mom didn’t even think to raise me bilingual. When she moved to Texas from Wyoming in the ‘80s, she wanted a different kind of life than what was being offered to her. She was one of the first Mexican American women to get a PhD in her field — for theater, film, and performance — but it was still so ingrained in her not to teach me Spanish; it wasn’t something that was received well back then. But my aunt Lupe is two years younger than my mom and she raised her kids bilingual. She was one of my main inspirations to learn the language because whenever I was around her family, I always wanted to be able to speak Spanish with them.

Once my class was over, I booked a place to stay and a ticket, and made plans for my dog, Benji, but I truly had no preparation outside of that. So I wrote on Instagram, asking if any of my followers knew of any Spanish learning environments in Mexico City. A few people wrote back that I should connect with Sonia Gil, a vlogger and the co-founder of Fluenz, a digital language-learning platform. I DM’d Sonia on Instagram, and she told me they had a Spanish immersion class starting that first Monday after I’d landed. I ended up learning more in that short week with Sonia in Mexico City than I learned in my entire six weeks of class in Austin.

Sonia and I were immediately kindred spirits. We stayed in touch, and I went back that August, because I knew if I wanted to collaborate on something together, I wanted to have the full immersion experience. We ended up creating a retreat in Mexico City that combined Spanish and yoga immersion. Anyone can do a Spanish course and yoga retreat, but what I wanted to prioritize was learning language through a yogic lens. It's not just seven days of yoga class; it’s visiting Frida Kahlo's house and asking, how do we bring yoga into that experience?

These two things all revolve around the same mission. A lot of times, people come to yoga because they want to become more flexible or they have anxiety, but then they find this whole other thread. I think that happens with language learning, too. You come because you want to be able to travel, or maybe you met someone whose first language is Spanish, but you end up having such an incredible personal journey within the learning process.

The experience of immersion follows the same thread. It's only when you're ripped out of your daily patterns and responsibilities that you begin to kind of open up some time and space for yourself to experience things or learn in a new way. It's all about providing yourself with that focused time and space, whether that's for yoga, Spanish, or both.

My approach to yoga is not just about the asanas. The foundation of Yoga with Adriene is to go back to the definition of yoga, which means yoke or union, and use the practice to unite with your true self, and with people we wouldn't normally unite with. Learning Spanish feels very kindred with yoga in that way, because it’s about getting to know yourself and your heritage, and connect people who wouldn't otherwise come together. We're all entitled to that journey of learning about our heritage, and our true selves.

More like this
The 2023 Super Bowl Commercials Feature A 'Breaking Bad' Reunion & Missy Elliott
By Alyssa Lapid
These Artists Are Reimagining Black History Month To Create A Better Future
By Katie Mitchell
25 Inspiring Quotes From Black Women To Celebrate Black History Month
By Kyli Rodriguez-Cayro and JR Thorpe
19 Instagram Captions For Celebrating Black History Month
By Ayana Lage
Get Even More From Bustle — Sign Up For The Newsletter
From hair trends to relationship advice, our daily newsletter has everything you need to sound like a person who’s on TikTok, even if you aren’t.