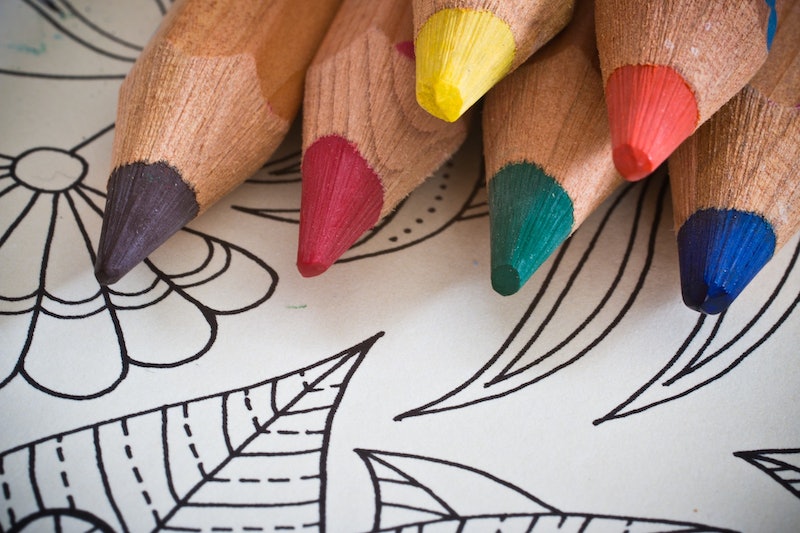 Have trouble adulting? Researchers at New Zealand's University of Otago have discovered that adult coloring books are actually really good for your mental health, so maybe you're doing something right for yourself by remaining a kid at heart.

Although some mental-health professionals have used art-therapy regimens with their patients for years, many of those interviewed for a 2015 article in The Guardian said that they had not, or would not, consider using adult coloring books in their practice. "The gist of the criticism," the British newspaper noted, was this: "If you want to color, knock yourself out, but don’t call it meditation or therapy."

Mental-health professionals might change their tune with the publication of the University of Otago's study, which found that coloring for as little as 10 minutes per day was enough to "significantly" reduce your "depressive symptoms and anxiety." That's right: You don't have to color for hours on end in order to reap the benefits of adult coloring books.

It's important to note that the University of Otago study was relatively small, with only 104 college students participating, all of them female. The students were given a psychological evaluation that measured a variety of mental health aspects, such as "depressive symptoms, stress, anxiety, flourishing, resilience, [and] mindfulness," and were then given either coloring books or logic puzzles to use and complete. One week later, the students' mental health was re-evaluated. Researchers found that "[c]oloring participants showed significantly lower levels of depressive symptoms and anxiety after the intervention, but [logic-puzzle] participants did not." University researchers "conclude[d] that daily coloring can improve some negative psychological outcomes and that it may provide an effective, inexpensive, and highly accessible self-help tool for nonclinical samples."

Even if doctors and other health-care professionals haven't been on board, the masses flocked to every new Johanna Basford release. Basford's Secret Garden kicked off the adult-coloring craze in 2013, and the books have remained big business in the west ever since.

Even if doctors and therapists don't get on-board with adult coloring books, it's unlikely that the people who love them will abandon their hobby anytime soon. Many adult colorers swear by the books as a go-to self-care tool for their anxiety and depression. As someone who lives with both of those conditions, I can tell you that coloring and other tasks that require my attention but allow me to progress at my own pace — such as playing Scrabble with myself — help me to focus on something other than my mental illness. Although coloring books might not work for all adults with anxiety, we can and should support the people who choose to use them for self care.

If you or someone you know is dealing with depression and anxiety, you can reach out to the trained operators at the Lifeline: 1-800-273-TALK (8255).