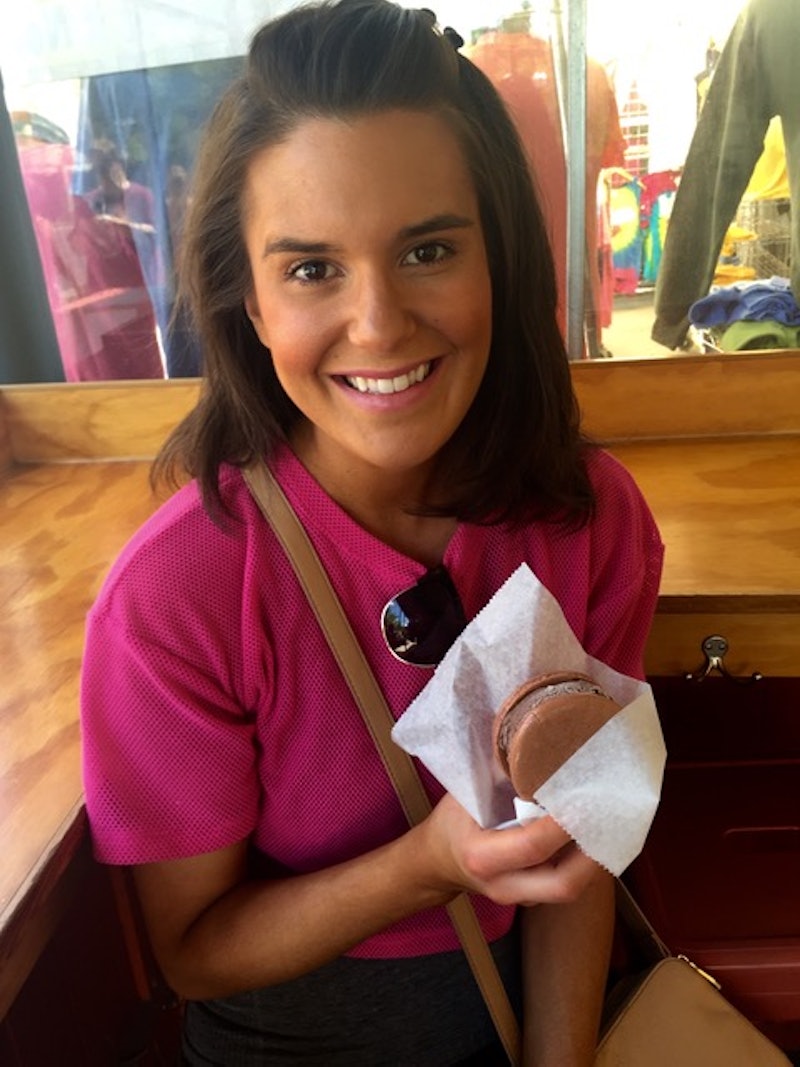 In 2018, I woke up one February morning with oddly puffy eyes. As I splashed cold water on my face to soothe them, I remember thinking I must have had too much salt. I ate whole, water-rich foods for the rest of that day. The next morning, when my eyes were even more swollen, I decided to juice; I thought the fluids would cleanse me. By Day 3, I knew something was wrong.

I went to urgent care, and told the doctor exactly what had happened. I also pulled a birth control pill pack from my purse, and handed it to him. I had just started taking the Pill, one day before the symptoms started. Routine-driven by nature, it was the only recent change I could account for. The doctor shook his head immediately. “It’s probably just allergies; take a Benadryl,” he told me. He was in the room maybe three minutes.

I did take that Benadryl. But my eyes kept getting more and more swollen each day; I was scared to fall asleep, knowing every next-morning things got worse. So I went back to urgent care. A new doctor gave me a steroid shot this time, and ran a basic battery of tests. I told him about the Pill, too, to no avail. He suggested nothing when those tests came back negative.

When the swelling continued to progress, I went to the ER. “It’s got to be an allergy in your environment,” the doctor said. For the third time, I clutched the birth control pill pack in my hands. I handed it to him, saying I had just started taking it and it was the only change in my routine. He didn’t even look at it, telling me that birth control doesn't cause eye swelling. He also prescribed Benadryl. I was confused, frustrated.

After 12 days of swelling, as well as night sweats and chills, I finally abandoned the pill pack on my own without medical advice. With prednisone, and thankfully, two visits with my primary care physician (PCP) who listened to me when I told him I was concerned the Pill was triggering the swelling, my angioedema went away. I have since found scientific evidence that angioedema can be caused by estrogen spikes. Maybe it’s not common. But it happens. And angioedema can be life-threatening if it causes the tongue or throat to swell; I’m lucky mine did not.

I’ve felt dismissed by the medical community since my teenage years, as a chronic pain sufferer with fibromyalgia and a battery of conditions that come with it (IBS, interstitial cystitis, high blood pressure). With this particular instance of feeling blown off, I kept wondering if it was just the perfect storm of “female” — pain condition, weird symptoms, birth control — that I kept being ignored. It wasn’t just the delay in treatment that irked me, but also the time spent and cost of each visit. I am not alone in being dismissed by medical providers.

Danielle, 31, was thoroughly prepared for her pregnancy and childbirth. “When Serena Williams shared her life-threatening birth experience with Vogue readers, it was a few months before I found out I was pregnant with my first child, and I vowed to be unapologetically vocal with my doctor during my check-ups and labor,” she tells Bustle. However, the doctor wanted no such thing. “When I expressed concern and presented my birth plan to my doctor during my eighth month of pregnancy, she told me, ‘Listen, you don’t have to worry about this. That’s my job. I have done this many times, and your job is just to have a healthy baby.”

Danielle recalls her doctor brushing her off with a smile, but she felt crushed by disappointment. “Instead of listening to my questions and reviewing my birth plan, she made me feel silly for doing my research,” she says. “Knowing that black women are dying at higher rates than white women during childbirth inspired me to be prepared; I was surprised to find my doctor wave her hand at that.”

Alexandria, 26, found a similar attitude in her doctor, after discovering a lump in her breast while applying a sticky bra one night before she went out with her friends. When she called to schedule an appointment the next morning, no one wanted to urgently get her in for a check-up. When she fought to see a doctor, that doctor said she was too young and too healthy to have breast cancer — that, instead, she should just keep an eye on the lump. “I, thankfully, didn’t take that as an answer and pushed for her to get me a more thorough exam,” she tells Bustle. “I didn’t know at the time, but that eventually ended up meaning a breast ultrasound, mammogram and biopsy, before I was eventually diagnosed with triple positive breast cancer.” (After chemotherapy, a double mastectomy and reconstruction, hormone therapy and medical menopause last year, she’s now cancer-free.)

Research has documented the ways in which women are discounted in medical diagnosis and treatment. Sometimes, it happens when a few minutes’ delay can mean life or death. A 2008 study showed men were treated for acute abdominal pain in 49 minutes in the ER, whereas women had to wait 65 minutes for the same treatment. Research from 2017 showed women in cardiac arrest are less likely to get CPR than men. A 2015 study published in the journal Circulation revealed that “the healthcare system was not consistently responsive to young women with AMI [heart attack], resulting in delays in workup and diagnosis,” contributing to women’s high cardiac mortality rate.

It takes an average of five years to be diagnosed with fibromyalgia, according to the American Chronic Pain Association. Before I received a diagnosis, one doctor thought I was on drugs. Another told me sciatica. Another thought maybe a UTI. The very first time I had a full-body pain flare, I went to the ER because the symptoms were so crushing that it hurt to lay in a bed. The doctor told me that I probably had a kidney stone. That immediately felt wrong, but I was 19 and too young to question medical authority figures. Years later, I would read an eerie account in The Atlantic, in which doctors wrote off the author’s life-threatening “ovarian torsion” as a kidney stone.

After months of symptoms and no diagnosis or treatment, I took matters into my own hands. I brought research I’d discovered online into my doctor’s office, insisting on the tests it would take to get a fibromyalgia diagnosis. I sometimes wonder how long it might have taken had I not insisted on tests, and known the specific condition I was looking for. Of course, fibromyalgia is not the only condition with a lag in diagnosis.

A 2018 study explained that “assigning a diagnosis” of Chronic Fatigue can take years, as “physicians are uninformed or misinformed about the disease.” Roughly 84 to 91 percent of patients affected by the syndrome have yet to see a diagnosis. A UK study from 2017 showed it takes an average of 7.5 years for a woman to be treated for endometriosis. The UK’s National Institute for Health and Care Excellence called on doctors to “listen to women,” and also introduced new guidelines for diagnosis and treatment in the same year.

Azmia, 33, has had experience being dismissed by doctors, including for endometriosis. She says doctors have tried to give her antidepressants instead of treatment. “I had multiple immune system problems that ultimately required low-dose chemo and immunosuppressants,” she tells Bustle. “Another time, I was told after a surgery that my pelvic pain was in my head, and maybe I was depressed. I had to have the same surgery a month later because they did it wrong.” At the time of the second surgery, she was diagnosed with stage 4 endometriosis, the most severe kind.

According to Maya Dusenbury, author of Doing Harm: The Truth About How Bad Medicine and Lazy Science Leave Women Dismissed, Misdiagnosed, and Sick, there are two major issues in health care that harm women. First, health issues more common among women have been low-priority for researchers. "Even today, study results are still not usually analyzed by sex, despite the fact that we now know there are often important differences between men and women in everything from the symptoms of the same disease to how various drug treatment are metabolized,” she tells Bustle.

The second issue is the medical community's “lack of trust” in women’s self-reports of symptoms. "There's a tendency to minimize, normalize, or psychologize women's symptoms — especially subjective ones like pain or fatigue,” Dusenbury says. "Many women find that before they are diagnosed, their physical symptoms are attributed to psychological distress, like depression, anxiety, or ‘stress.' This is rooted in a very long-standing stereotype that women are particularly prone to ‘hysteria’ — physical symptoms that are rooted in the 'unconscious mind.’”

Women sometimes have to press physicians even harder to be heard out. It can feel challenging to advocate for yourself against pushback, especially when you're sick, but Jen Caudle, DO, a family physician and associate professor at Rowan University School of Osteopathic Medicine, can’t encourage it enough. She says if you don’t feel heard, find a new doctor. “I often tell patients to ask around," she tells Bustle. "Just like you might a hairstylist. ‘Who are you seeing? And do you like them?””

Keep “insisting” on addressing symptoms, says Caudle. “You can say, ‘I know we discussed my abdominal pain last time, but I’m still experiencing it and I’m worried; what can we do?’” she says. If you’re still not comfortable with your current doctor, or they’re not hearing out your concerns, you should feel empowered to “fire” them. “Just like any relationship, with a doctor-patient relationship, it’s possible to stay too long,” says Caudle.

Caudle encourages patients to do their own research if they’re not finding answers, as long as they are using reputable sources — think Mayo Clinic and WebMD, as well as medical journals — so you don’t end up “down a rabbit hole you might not want to be down.”

Not only was research crucial to my own diagnosis, but it was one of the best things I’ve ever done for myself. I certainly think medicine needs to do better, and “listen to women,” in the words of the National Institute for Health and Care Excellence. But doctors are also human; while they see my condition once every few months, I live with (and must manage) my condition every single day. My primary care physician — who believed my concern that the angioedema was triggered by my BC — recently told me the most compelling part of my case was how well I understood my conditions and the way my body reacted to stimuli. It was one of the most validating things a doctor has ever told me. After eight years of chronic pain, my personal idiosyncrasies, and dealing with doctors, I am finally beginning to realize that I am my own best asset. Until medicine catches up with me, I will continue to be just that — as I fight to be heard, along with women everywhere.