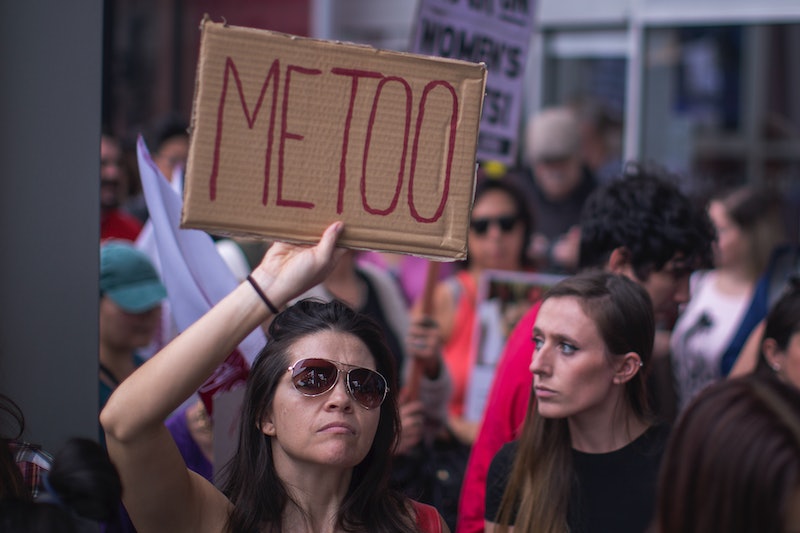 This past fall, the #MeToo movement ignited a global conversation about sexual harassment and sexual assault that worked to smash certain myths and stereotypes, while providing a platform for millions of survivors to come forward about their experiences. These past six months have undoubtedly deepened our collective understanding of sexual violence, and helped many survivors feel safe enough to disclose their trauma. But there are still aspects to the conversation about sexual assault and harassment that have fallen by the wayside — particularly surrounding the mental health of survivors.

Warning: This article contains information about sexual assault, incest, and suicide, which some may find triggering.

“We too often view healing as the destination, not the journey. I think it is very easy for people to want to hear a particular survivor narrative ending in strength or some form of resolution. The reality is, healing is often messy, difficult, and nonlinear, and pretending otherwise puts pressure on survivors to fit a ‘perfect victim’ archetype,” Christine Fei, research manager for End Rape on Campus, tells Bustle.

Moreover, Rachel Sharkey, an advanced certified sexual assault advocate, tells Bustle, “We need to remember that every single survivor reacts in different ways. All reactions are valid trauma reactions. That means some individuals may be able to function as they did before their assault, and some may have mental health issues after their assault. We need to support the entire spectrum of response with trauma informed care.”

According to the Rape, Abuse, and Incest National Network (RAINN), the aftermath of sexual violence and its impact on a survivor can be wide-ranging. Survivors can develop eating disorders, sleeping disorders, depression, anxiety, self-harm behaviors, intrusive thoughts about the traumatic incident, suicidal thoughts, or dissociation. However, not every survivor develops chronic PTSD, or co-occurring disorders after trauma: some may experience Acute Stress Disorder, which causes the same symptoms of PTSD, but does not last longer than a month, while others may not develop any symptoms at all.

Furthermore, it’s not uncommon for survivors — especially those who have survived childhood sexual abuse or life-threatening situations — to only retain partial memories of their trauma, or very few details. And some survivors may have no memories at all until years — even decades — after the abuse occurred. It's vital to understand that a lack of memory can be a symptom of trauma itself, rather than "evidence" that a trauma did not occur — especially when a survivor decides to confront their abuser in a public way.

“We still see confusion or skepticism around survivor stories that come out years after the assault. It's important to understand that in the immediate aftermath of a sexual assault, it is very common for victims to try to resume their normal lives as if it didn’t happen,” Susan Sullivan, a prevention campaign specialist for the National Sexual Violence Resource Center (NSVRC), tells Bustle. “Many victims experience intense disbelief, particularly when the offender is someone they know and trust. When victims do disclose, we shouldn't ask why they didn’t speak up sooner: it takes an incredible amount of courage for a victim to come forward.”

Sullivan says that not only is the healing process unique to each and every survivor, but that the process of seeking justice and finding appropriate mental health treatment is extremely individualized, too.

“A survivor may, or may not choose to move forward with the criminal justice system — in fact, many survivors do not report their assault. Working with law enforcement can sometimes be threatening or harmful, and sometimes survivors are not ready for that,” she says. “There are other avenues for healing, such as restorative justice, which is an approach that focuses on reconciliation, and accountability.”

For Dr. Patti Feuereisen, a psychologist, author of Invisible Girls: The Truth about Sexual Abuse, and founder of GirlThrive, it is not just about what is missing from the conversation surrounding sexual violence and mental health, but who is missing. “If you look at the #MeToo movement, most of it has been about rape, or sexual assault — nobody wants to talk about incest. But, sexual abuse occurs to one out of four girls before she's 16 years old,” she says. “We have a lot of teenage girls living in abusive or incest homes that are hearing all these [#MeToo] stories, and they are getting triggered, or suicidal to the point they have to be hospitalized. There's a lot going on where the teenage population is not able to get the same kind of help as an [adult] who discloses their #MeToo experience.”

Additionally, marginalized communities that may not have the same access to adequate mental health care after sexual trauma — including undocumented people, sex workers, the LGBTQ community, or Indigenous women, among others — have often been on the fringe of discussions about how to prevent sexual assault and support survivors.

Preventing sexual violence, empowering survivors, and encouraging necessary change will take constant effort, education, and advocacy work. “I think we need to move past the lens of ‘sexual assault awareness,’ and towards advocacy, and action," Fei says. "Most people are aware that sexual violence occurs and that it is a problem; fewer people are making conscious efforts to practice affirmative consent in all areas of their lives, to support survivors, and to hold perpetrators they know accountable."

Josie Torielli, the assistant director of intervention programs for the New York City Alliance Against Sexual Assault, tells Bustle that she wants to see our ideas about “consent and healthy sexuality” continue to grow. “I would love to see anti-sexual violence work taken up by those who have no other stake in the movement other than their own humanity. For too long, those who have experienced oppression and victimization have had an added call to create change.”

Most importantly, we need to keep centering the voices of survivors, prioritizing their mental health, and breaking down the stigmas associated with sexual violence at every chance we get. “The main thing is we need to keep talking about sexual assault. We opened the conversation, and we need to keep it going,” Dr. Feuereisen says. Talking about sexual violence is never going to be easy or comfortable, but the more we address the gaps in our understanding of it, the better we will be able to prevent it and support those who experience it.