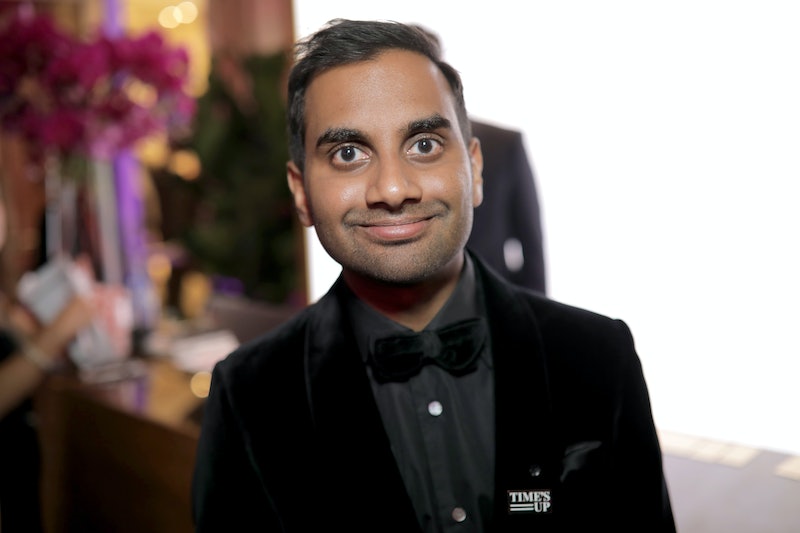 In recent months, our news cycle has been dominated by allegations and reports of sexual misconduct. Many of the responses to women coming forward with their stories have been overwhelmingly positive — we laud them for their bravery in speaking up. But an article published over the weekend about a 23-year-old photographer's date with Aziz Ansari going wrong after he allegedly ignored her discomfort has seemingly divided the internet. In the babe.net article, the anonymous woman describes getting undressed, having oral sex, and allegedly feeling pressured to have sexual intercourse, even though she claims she was "pulling away and mumbling" and "stopped moving my lips and turned cold." Ansari released a statement responding to the allegations brought forth in the article:

In September of last year, I met a woman at a party. We exchanged numbers. We texted back and forth and eventually went on a date. We went out to dinner, and afterwards we ended up engaging in sexual activity, which by all indications was completely consensual. The next day, I got a text from her saying that although "it may have seemed okay," upon further reflection, she felt uncomfortable. It was true that everything did seem okay to me, so when I heard that it was not the case for her, I was surprised and concerned. I took her words to heart and responded privately after taking the time to process what she had said. I continue to support the movement that is happening in our culture. It is necessary and long overdue.

According to the essay, the anonymous woman came forward about Ansari after seeing him wear a 'Time's Up" pin at the 2018 Golden Globes to show solidarity with women who have been mistreated. The woman and Ansari went on a date in late 2017 — neither party disputes that — but the woman claims she felt violated after going back to Ansari's apartment.

Some critics say that allegations like the one published by babe.net only tarnish the #MeToo movement because they bring up the issue of sexual coercion within a broader conversation about sexual assault, though they are two different aspects of rape culture that impact women. In The Atlantic, a writer called the essay "3,000 words of revenge porn." The New York Times ran an op-ed about Ansari with the headline, "Aziz Ansari Is Guilty. Of Not Being a Mind Reader." An excerpt: "The insidious attempt by some women to criminalize awkward, gross and entitled sex takes women back to the days of smelling salts and fainting couches." On Twitter, the story has prompted a host of problematic questions: Why didn't she leave? Why didn't she fight back? Why did she go back to his apartment in the first place?

But if the #MeToo movement doesn't have room for stories about men allegedly ignoring non-verbal cues to stop pursuing sex, then what's the point of the movement in the first place? The alleged story about Ansari doesn't set back the #MeToo movement. If anything, it reminds us that this is a conversation we need to be having.

The #MeToo movement — founded a decade ago by Black activist Tarana Burke and gaining traction last year — is a space for women to share their stories about sexual harassment, assault, misconduct, and misbehavior. Critics may say the anonymous woman's story is a set back for the movement — an op-ed in the Washington Post says it "harms the #MeToo narrative writ large" and "derails any future stories about Ansari that might come out" — and makes it seem as if women lack agency. But what if the story actually allows us to have a broader conversation about consent and our culture surrounding it? Instead of "no means no," perhaps it's time to focus on "yes means yes." This is especially relevant because Ansari has been outspoken about his feminist beliefs.

This is what enthusiastic consent is all about — in order for a sexual encounter to be consensual, all people involved need to voice their enthusiasm about what's happening — not just their non-refusal. If we say that it's OK for people to have sex with their partners as long as they're not kicking and screaming, we're holding men to the lowest possible standard.

The story we should be discussing is much bigger than this one account. In reality, this woman's account is a call to improve the language we use when we're discussing consent and the expectations we have. There shouldn't be a gray area. If someone isn't enthusiastic about a sexual encounter, it shouldn't happen. Is this idealistic? Probably. But we have to do better for the anonymous woman and the countless women who have had similar experiences to the one she claims happened to her.