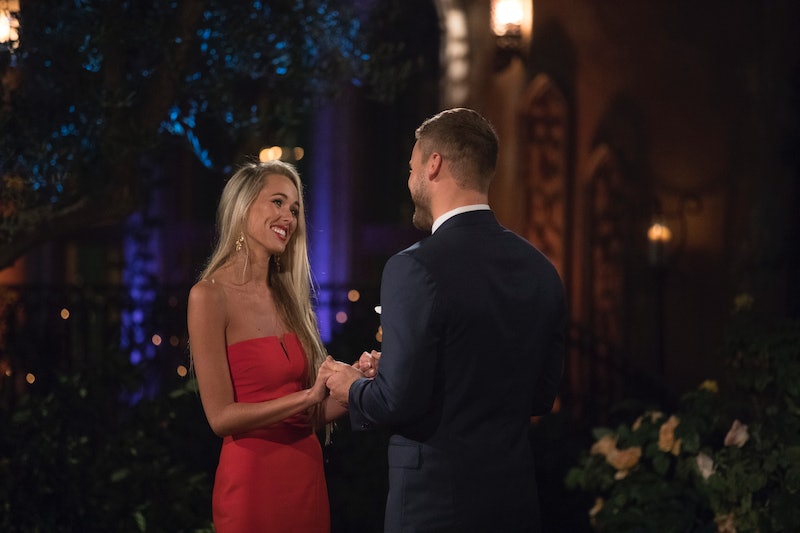 Heather may finally get that first kiss she's been waiting for on Monday, because she and Colton look like they have a one-on-one date in Thailand according to the upcoming episode preview. She says in the promo, "I am in Thailand and I want Colton to kiss me. I have waited 23 years of my life. It would be unforgettable." But whether or not Colton does lay one on her, Heather's been off the show for a while since filming concluded and her that Thailand one-on-one is long behind her. So what is Heather doing after The Bachelor?

Filming for The Bachelor usually commences in late September and runs through late November, according to INSIDER. That means Heather's been home for at least two months and maybe more depending on if and when Colton sent her home. Lucky for curious fans, Heather's been posting photos about her life post-show on Instagram for everyone to snoop through. She didn't reveal if she got kissed in Thailand (and honestly she's way more than just the "Never Been Kissed girl" anyway), but here's what her social media does reveal about what she's been up to since saying goodbye — or preparing to say "I do" — to Colton.

Hanging Out With Her Twin Sister

Did you know Heather had a twin? You do now! Her name is Colie and they look pretty much identical.

Hanging With Her Other Sister

Heather doesn't only have a twin. On the right side of this photo is her sister Shannon.

Dancing With Her Family On Christmas

Living An Idealized Version Of A California Lifestyle

Google Los Angeles, and this picture will probably come up because it's just so L.A.

Joking About Her Bachelor Job Title

Heather's occupation on the show may be listed as "Never Been Kissed," but she wrote in her caption for this photo "#ihaveajob #iswear."

According to her LinkedIn, that job is Assistant Program Manager at Aethercomm, which designs and manufactures technology used in "radar, electronic warfare, communication systems," and more, according to the company's website.

Heather has a lot of love for the rest of this season's women, writing in her caption, "The amount of depth and beauty in each of these ladies is so much more than meets the eye. So much love for all my girls."

That stands for the three H-name contestants — Hannah G., Hannah B., and Heather — plus Demi.

Sharing her story of never being kissed brought a lot of supporters out of the woodwork for Heather — and it also made a lot of people in a similar situation feel less alone. She wrote in the caption on this post:

"After I opened up to Colton about my experience on last night’s episode, the outpouring of comments, DMs, and kind words of encouragement have been SOOOOO INCREDIBLE. I am so happy if my story can help anyone feel less alone and normal about taking YOUR time with relationships!"

Even if Colton and Heather don't kiss before her time is over on the show, she clearly brought home some great friends and memories. And she helped a lot of people feel more comfortable in their own skin along the way. That's a win, final rose or not.