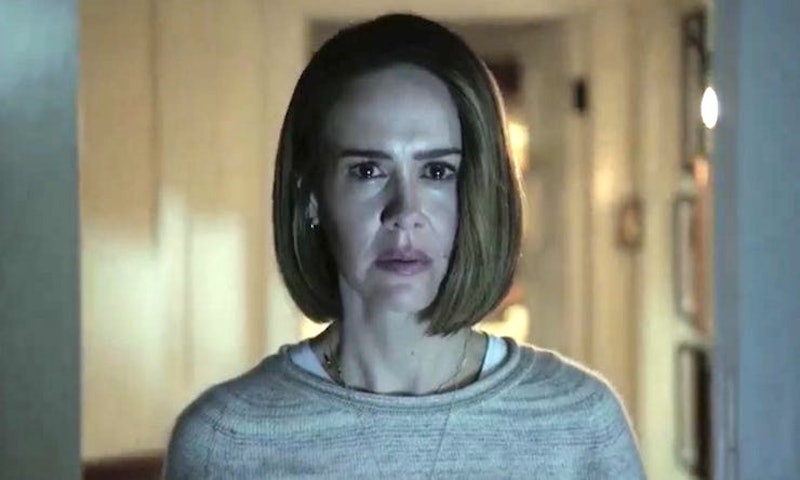 Nearly a year has passed since election night 2016, but the release of a new American Horror Story: Cult trailer has some viewers feeling like it’s happening all over again. The experience of watching this trailer is, at times, so uncanny that there should be a disclaimer at the bottom of the screen with the phrase "this is a dramatization." For those with strong enough stomachs to watch, the trailer gives a terrifying look into a worst case scenario of the United States after Trump's election. With terrorizing clowns, a terrified family, and a nanny bent on harming a child, this trailer teases a season of AHS that is on track to be the most frightening yet.

Not to mention it features some of the most pertinent and simultaneously unnerving dialogue of any season of the show. Is anything more ominous than a character saying, "If you get people scared enough, they will set the world on fire"? Not to mention the lively exchange where Kai (Evan Peters) asks Winter (Billie Lourd) “What fills your heart with dread?” and she answers “Children." With its political commentary and cultural relevance, this season of AHS: Cult is bound to hit very close to home. Check out the following six clues as definitive proof.

The minute-long trailer doesn’t leave much to the imagination, telling audiences upfront that it is set in Michigan in 2016. It is clear once we arrive at the home of Ally (Sarah Paulson) and her wife Ivy (Alison Pill), that we are watching them watch election night coverage in November of last year. Notably, this scene takes place in one of the battleground states where Donald Trump only won the popular vote by 0.3 percent.

Michigan was also among the three states that Green Party candidate Jill Stein called for a recount. This is an ideal setting for a story of a community on the brink of division that the United States as a whole experienced prior to and following the election.

2. There Are Tons Of Clown Sightings

Evil clowns are a recurring theme in the various teasers released in advance of AHS, so it was no surprise that there is an abundance of disturbingly painted faces in this trailer. There are several overt callbacks to the murderous clown Twisty from AHS: Freak Show, as well as terrorizing by other unnamed, but equally terrifying masked clown characters.

Setting aside the already rich lore around scary clowns, this could be a recall to the frequent creepy clown sightings of late 2016. Though the clown sightings were largely dismissed as a hoax committed by pranksters, they made people nervous in an already anxious political climate. Some even drew ties between the clown panic and the political panic happening concurrently.

3. It Deals With Fear & Mental Health

It is no secret that many Americans were anxious about the election results and felt their fears realized when the election was called for Trump. The rise in mental health awareness has been steady for the past few years, but spiked as more sought therapy around election season.

Ally sees a therapist of her own (Cheyenne Jackson) and struggles with agoraphobia, which causes the sufferer to avoid situations and environments that might induce panic. This could bring up the modern idea of liberals as "snowflakes," with many young progressives perceived by some as excessively emotional and easily offended.

The trailer tackles another issue recently causing a split along party lines. Our protagonist and her partner are a same-sex couple raising a son. Even after the 2015 Supreme Court decision that guaranteed same-sex couples the fundamental right to marry, there are still attempts to infringe upon the rights of the LGBTQ community. It would not be surprising if AHS: Cult tackled this very conversation by in some way showing the protagonists struggling against homophobia.

Given the political unrest that preceded the election as well as the fear of terrorism stoked by Trump in speeches and debates leading up to that fateful night, this imagery is especially terrifying. We see a clown attempt a home invasion and Ally arming herself with a gun for protection. There is no doubt AHS: Cult will address the same anxieties that many people are experiencing in a world that no longer feels safe to them, albeit in a uniquely horrifying way.

The most symbolic element in the trailer was the final shot of a Kai standing in front of a wall painted with a white hexagon on a background of black and red stripes. His arms are stretched open as he faces the camera and says "Join me." While this literally speaks to the titular cult, it also fans the flame of this season's obsession with the number six. The back wall has six red stripes and the hexagon has six sides. The number six is known for its negative connotations, largely linked to the number 666 which has long been associated with the Devil with roots in the Biblical Book of Revelation.

Besides having six sides, the hexagon is also a shape frequently associated with bees, another symbol used frequently in teasers for AHS: Cult. This draws a connection to the hive mind trope, an idea that a group of people come together as a collective and conform to the same ideas or opinions. In other words, a cult. No doubt the relationship between hive mind and 2016 American politics is not lost on anyone.