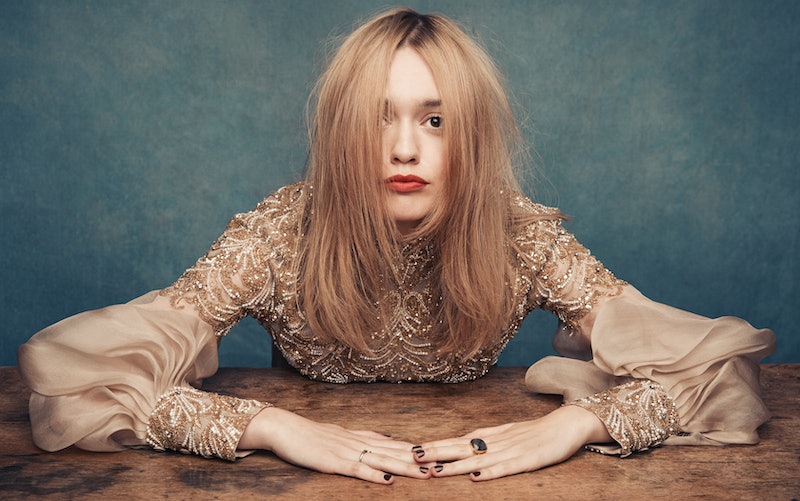 A Netflix series that includes a super sex positive message, Gillian Anderson as a sex therapist, and lines like “where’s the spunk, Adam?” What more could you want? Season one of Sex Education took the world by storm, and it’s not hard to see why. The opening scene of Aimee and Adam struggling to get each other off set the tone for the whole series and, hot on the heels of the season two announcement, I caught up with Aimee Lou Wood to hear what it's like to play one the show's most popular characters.

Aimee is often at the centre of all the sexual misadventures in Sex Education. Delving into the depths of teenage sexual mishaps, series one shone a light on everything from vagina shaming to understanding your worth in the bedroom. The moment Aimee appeared on our screens searching for gratification in Adam (played by Connor Swindells), I connected with her. Her desperate need to please people and the idea that she was empowering herself by sleeping with a guy even though she was getting no pleasure from it really struck a chord. Aimee is undeniably likeable and her journey of sexual self discovery is something that Lou Wood thinks is incredibly important.

Alice Broster: Sex Education was a phenomenon, how did you react to its success?

Aimee Lou Wood: [Before shows are released], people have realistic chats with you saying “even if you think it’s great and you’ve had a wonderful time it doesn’t always take off.” I had this feeling in my gut, because we loved it so much and there was so much joy in it and care, I thought surely people will see this.

It’s overwhelming. I have the same name as my character so there isn’t a lot of separation for me. Stuff that she was going through this year in the show really mirrored stuff going on for me in real life.

AB: What attracted you to the role of Aimee in the first place?

ALW: I auditioned for Lily three times and I loved her so much but there was a disconnect somewhere. They told me to come back in and put what I was putting into Lily into this new character. Within the first 30 seconds of reading Aimee’s stuff, I was in hysterics. I didn’t understand how they’d created this deeply human, relatable girl because I really feel she’s the every woman.

AB: What do you hope women can learn from Aimee taking ownership of her body and sexuality?

ALW: When you first meet Aimee, she’s on top of this guy, talking about her boobs, and she probably seems like a sexually confident woman. She’s so naive in a lot of ways. She’s thinking she’s using sex as currency and a way to get validation when she’s such a contradiction and I want women to see that and know they can be contradictions.

She’s kind of become this feminist icon, which is so weird to me because when I first saw the script and read the scene I thought, “Oh god here we go. She’s just another female character pretending she’s having a whale of a time while she’s having shit sex to stroke the guys ego. She’s pretending to have an orgasm from just being penetrated, yet again.” Which I’m so sick of seeing in films. But then you see her delayed gratification and I get to take her on this journey, which continues to go deeper in season two.

AB: There’s a whole storyline on vagina shaming, how important do you think it is that really issues like this are explored onscreen?

ALW: I remember everyone walking around with this anxiety about whether their vagina was normal and you’d hear boys having conversations talking about a girl who had a “minging vagina.” That’s so damaging and so horrendous but at the time you think that’s normal and what you have to go through as women. And actually it’s not. We have to stand up and say, these are our bodies, we love them, and they’re incredible. Can you give birth? Can you bleed for five days and not die? We can do these incredible things and we have incredible bodies but because we’re so sexualised it becomes all about aesthetics. That’s why I loved the “it’s my vagina” scene more than anything. That’s my favourite scene of the whole series.

AB: The cast is so tight on screen, is it the same behind the scenes?

ALW: We genuinely are. There’s one scene that I can’t talk about but it was among the women and we all got so emotional because it felt like it was such an extension of us. We were having the kind of conversations we have in real life but on screen.

AB: And what should fans expect from series two?

ALW: It’s really going to pull at the heart strings. We watched a trailer as a cast because we’ve all been quite separate this year because the series has gone deep into our own individual storylines, and it was so amazing to see what everyone else had been up to. It’s retained that joyful, silly, funny vibe but it really goes deep.

AB: You’re also starring in a new adaptation of Chekhov’s Uncle Vanya. You’ve had so much experience on the stage, do you find it's very different from performing on TV?

ALW: The one thing I love about theatre is rehearsals. You get weeks so by the time you go out there you know the cast, play, and your lines so well. I’d love to have rehearsals with the Sex Education cast. It’d be like six weeks of hanging out every single day. I’m so excited to go back. But I do have the best of both worlds with Sex Education and Uncle Vanya.

Lou Wood will return as Aimee in Sex Education season two on Jan. 17, 2020. She's appearing alongside Toby Jones and Richard Armitage in Uncle Vanya at the Harold Pinter Theatre in London from Jan. 14, 2020.