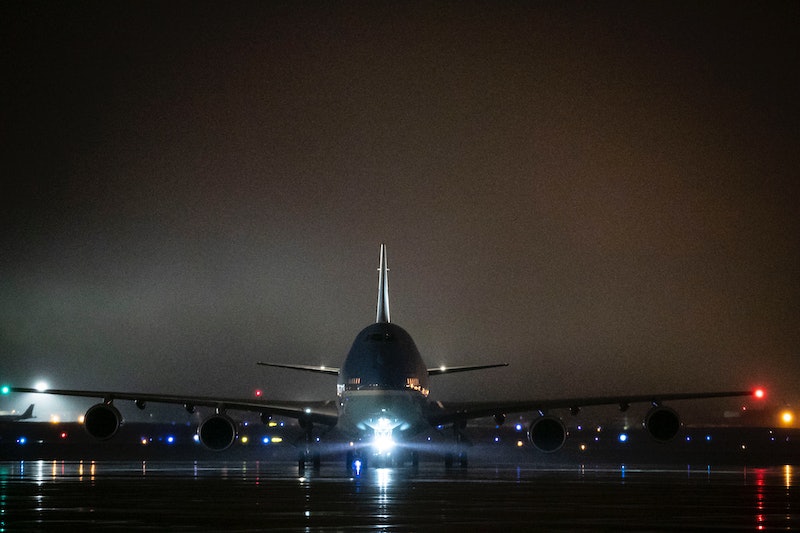 On Wednesday the Federal Aviation Administration confirmed that all U.S. Boeing planes of the same make and model as the ones in two recent crashes are being grounded indefinitely. Now, airlines grounding Boeing 737 Max jets are providing updated policies for affected travelers. So if you're flying American Airlines, Southwest, or United Airlines any time soon, you might want to look into your flight status.

The three U.S.-based airlines that have 737 Max planes in operation have all released statements about how they plan to accommodate customers. In a statement to Bustle, Southwest, the largest carrier of Boeing 737 Max planes, provided the following information regarding the recent grounding:

Our goal is to operate our schedule with every available aircraft in our fleet to meet our Customers' expectations during the busy spring travel season. Additionally, to support our Customers, Southwest is offering flexible rebooking policies. Any Customer booked on a cancelled MAX 8 flight can rebook on alternate flights without any additional fees or fare differences within 14 days of their original date of travel between the original city pairs. A Travel Advisory with additional information for Customers will be posted on Southwest.com.

American Airlines also provided a statement to the public, which reads in part:

Earlier today the Federal Aviation Administration (FAA) informed us that based on new information, they are grounding the United States Boeing 737 MAX fleet out of an abundance of caution. American Airlines has 24 aircraft affected by this directive. We appreciate the FAA’s partnership, and will continue to work closely with them, the Department of Transportation, National Transportation Safety Board and other regulatory authorities, as well as our aircraft and engine manufacturers. Our teams will make every effort to rebook customers as quickly as possible, and we apologize for any inconvenience.

As for United Airlines, the company released a statement that says in part:

Since Sunday, we have been working diligently on contingency plans to prepare our fleet to minimize the impact to customers. Our Boeing 737 MAX aircraft account for roughly 40 flights a day and through a combination of spare aircraft and rebooking customers, we do not anticipate a significant operational impact as a result of this order. We will continue to work with our customers to help minimize any disruption to their travel plans.

In response to the grounding, Boeing released an updated statement on the matter, confirming its support of the FAA's decision. Within the statement, Dennis Muilenburg, president, CEO, and Chairman of The Boeing Company, said in part:

We are supporting this proactive step out of an abundance of caution. Safety is a core value at Boeing for as long as we have been building airplanes; and it always will be. There is no greater priority for our company and our industry. We are doing everything we can to understand the cause of the accidents in partnership with the investigators, deploy safety enhancements and help ensure this does not happen again.

To reporters on Wednesday, Vox reports that Trump said the planes will be grounded "until further notice." He added, “The safety of the American people, of all people, is our paramount concern."