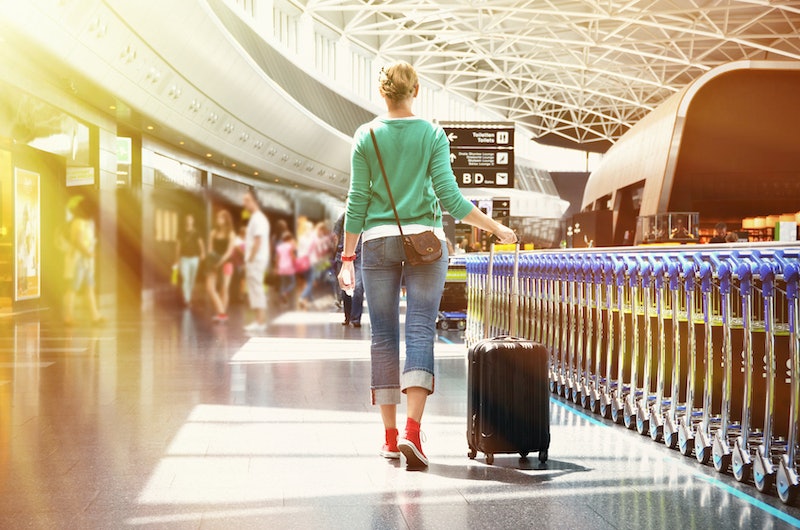 It is a common occurrence frequent fliers know all too well: flight delays. Traveling is one of life's greatest privileges and adventures, but sometimes no matter how much you plan you cannot stop something from hindering your experience. Airports try to provide amenities for people who spend more time than planned within them, but there is one activity airports have never been conducive to: sleep. That is, before now. Or, soon, rather — nap pods with Netflix and Wi-Fi will be hitting airports around the world.

When that days comes, you'll be able to take a nap in an airport using a self-contained sleeping apparatus called an Airpod, according to Travel + Leisure. This Airpod is not to be confused with Apple's new wireless headphones, also called Airpods. The Airpod is unique, as it was designed with one role in mind: as a sleep space specifically for travelers stuck in airports for unplanned stretches of time. They are effectively little portable rooms that contain a chair which converts into a bed, perfect for all your napping needs. They give you a place to charge your electronics, Wi-Fi, a television, and even an air purifier! I bet you didn't even know you wanted one of those!

Right now, the pods are still in development. But, according to the Airpod website, infrastructural development should be completed soon, as will the construction of the first ten Airpods. Later this year, they will likely begin a testing phase for Airpods around airports in Europe. If all goes well, the device could soon make an appearance in an airport near you. The goal, according to the website, is to have 100 Airpods installed in airports by early next year. Developed by Slovenian businessmen Mihael Meolic and Grega Mrgole, the idea for the Airpod grew from personal travel woes. The goal of Airpod, "...is to improve travel experience overall and additionally to offer those interested in the business the opportunity to earn passive crypto-income,' explains Meolic to the blog Electronic Specifier. The idea and plans for the Airpod were presented earlier this year at a Crypto Conference in Belgrade, Serbia.

The idea for a personal area in an airport is excellent. In fact, as Electronic Specifer notes, in a survey conducted by sleepingairport.net, more than ninety percent of passengers reported they would be willing to pay for a sleeping pod at an airport. For this reason, perhaps it should come as no surprise a few airports, the most transient of all buildings, already have spaces designated for ~alone time~. Earlier this year, New York City''s Laguardia Airport introduced the Jabbrrbox (pronounced jab-burr-box). It is similar in concept to the Airpod, but rather than providing a place to rest or sleep, the Jabbrrbox, per Travel + Leisure, comes equipped with, "Wi-Fi access, USB charging, speakers, flight trackers, and mood lighting." It is ideal for people (like myself) who are unnerved by flying, and need to clear their heads a bit before boarding is called.

Since everything in Vegas is more outrageous, details about the secret bedroom tucked away in McCarran Airport may no surprise you all that much. In fact, it is so hidden, even if you have traveled through the airport, chances are you missed it. To find, and subsequently rent for as little as five bucks per hour (according to Travel + Leisure) a bedroom at McCarran Airport, you gotta go to the gym first. As counterintuitive as it may seem, rentable bedrooms are available in ZEROlevel Fitness & Wellness.

But if your heart is set on the Airpod, you may have to give it a try in Europe first. European vacation? It's a tough price to pay to try out an airport nap pod.