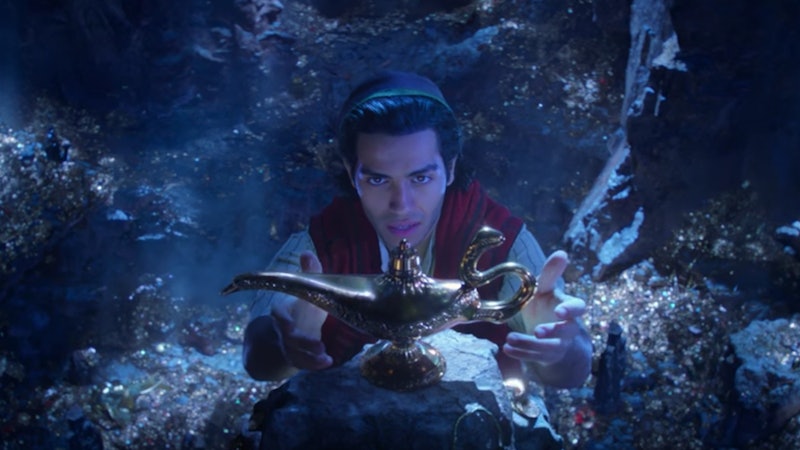 Aladdin may have found his fairytale ending in the live-action remake, but the same can't be said about his real-life counterpart. During a recent interview with The Daily Beast, Mena Massoud revealed he hasn't had any auditions since Aladdin hit theaters, despite the film's success — according to Box Office Mojo, Aladdin made over $1 billion at the box office — and his crucial role in bringing the world of Agrabah to life. Understandably, the result has left him feeling both disappointed and confused.

“I’m kind of tired of staying quiet about it,” Massoud told the outlet. “I want people to know that it’s not always dandelions and roses when you’re doing something like Aladdin." While fans might automatically assume the aftermath of the movie has opened the door to a lot more opportunities, that has not proven to be the case. "I haven’t had a single audition since Aladdin came out," he added.

To be clear, Massoud, a 28-year-old Egyptian actor from Cairo, was under no assumption that the film would instantly make him a household name. He made clear that he was beyond grateful for the role. However, given that the box office results made Aladdin one of Disney's most successful live-action reboots of all time, as reported by Variety, Massoud is surprised he isn't more prominently on Hollywood's radar. "I’m sitting here being like, 'OK, Aladdin just hit $1 billion. Can I at least get an audition?" the actor continued. "Like I’m not expecting you to be like, here’s Batman. But can I just get in the room? Like, can you just give me a chance?"

Unfortunately, the fact that Massoud hasn't received a warm welcome into Hollywood isn't all that surprising. In fact, according to a 2018 study conducted by Dr. Stacy L. Smith and her team at the Annenberg Inclusion Initiative, as per Essence, Hollywood's diversity problem hasn't improved in a decade. According to their "Inequality in 1,100 Popular Films" report published in 2018, Annenberg's study found no significant change in representation for women, people of color, members of the LGBTQ community, or people with disabilities within the industry.

So as much as starring in one of the biggest movies of the year should do for an actor's career, the opportunities for Massoud just aren't being created. It's a harsh reality that has given the actor a shift in perspective. "As for whether people are gonna discover me from it or what it’s going to do, I literally have no clue," he stated during the same interview. "I can’t tell you I know how things are going to work out anymore.”

That said, Massoud's career is far from over. He's starring in a new Hulu series, Reprisal, premiering on Dec. 6. Clearly, he's not planning on going anywhere.

More like this
North West Will Make Her Acting Debut Alongside Mom Kim Kardashian
By Radhika Menon
Pamela Anderson’s Dating & Marriage History Could Be Its Own TV Series
By Jake Viswanath
Jennifer Coolidge Hunted For Jewels & Lashes In J.Lo’s Hotel Room
By Jake Viswanath
Keke Palmer Shares The Sex Of Her & Darius Jackson's Baby
By Jake Viswanath
Get Even More From Bustle — Sign Up For The Newsletter
From hair trends to relationship advice, our daily newsletter has everything you need to sound like a person who’s on TikTok, even if you aren’t.