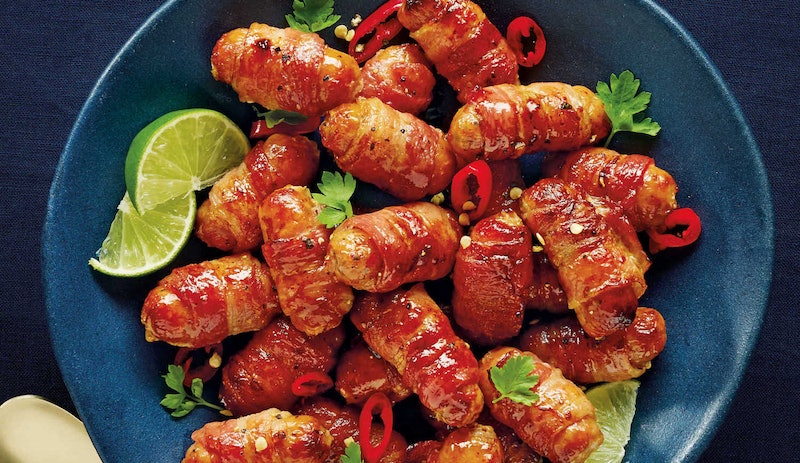 All Christmas Days are different. While I’ll be up at the crack of dawn, cup of tea in hand, ready to open some presents, for others it’s a far more laid back, Prosecco-filled affair. Whether you like your Christmas dinner before or after the Queen's speech, there’s one thing that has to be on every festive table — pigs in blankets. And you can now get your hands on a spicy twist to the Christmas classic. Aldi is selling pigs in blankets made with the second hottest chilli in the world. The most delicious of sides, it’d be wrong to go through Christmas Day without them, but this treat isn’t for the faint hearted.

You won’t have to worry about being cold this Christmas with Aldi’s new super spicy pigs in blankets. For £2.29 you can buy their new Scorpion Chilli Pigs in Blankets and to say they pack a punch is an understatement. Described by Aldi as “hot and fiery pigs in blankets made with specially sourced scorpion chilli from Trinidad” the spicy seasonal treats go on sale on Nov. 28.

You may think you like spice but if you’re thinking of adding the Scorpion Chilli Pigs in Blankets to your Christmas dinner table you might want to do so with caution. According to Pepper Head the Trinidad Scorpion Moruga Blend, AKA Moruga Scorpion, is a rare sought after pepper that was only recently discovered. Native to the lands of Moruga in Trinidad and Tobago, once you take a bite of this formidable pepper the heat doesn't stop building. It comes in at 2,009,231 on the Scoville Heat Unit (SHU) which is the global measure of spicy foods. To put that into context a typical jalapeno pepper rates about 5000 SHU. The Trinidad Trinidad Moruga Scorpion pepper is more than 400 times hotter.

Whether you plan on playing pigs in blankets roulette around the dinner table or just can’t get enough of the seriously hot stuff Scorpion Chilli Pigs in Blankets will be in Aldi shops from November 28. I'd maybe have a glass of milk on standby, if I were you.