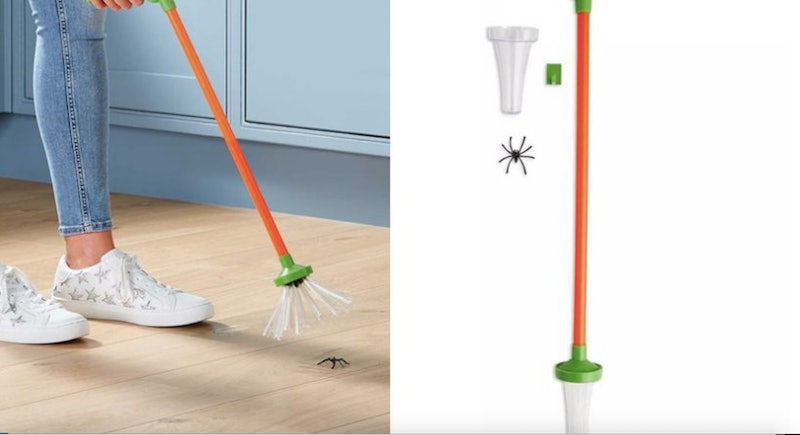 Many of us have a dislike of spiders. And by dislike, I obviously mean an all-out terror mixed with hatred mixed with disgust. Some people have a total meltdown at the sight of the crawly critters and, while a few can handle them dignity or are even drawn to them, most of us are at least a little grossed out. But just because you don't like spiders, doesn't necessarily mean you think they deserve a painful death. That's why it's time for a humane spider catcher that doesn't hurt spiders, letting you get rid of the creepers without causing them any pain. It's a total win for vegans, animal lovers, and people who simply don't like killing things. Now you can get those spiders far, far away from you — without any of the guilt.

Aldi is launching a Zero In Spider Catcher in the U.K., which will be available from Aug. 25th for £7.99 (or about ten bucks) — and with a handle that's over two feet long, you can stay far away from any spider in question. It uses soft bristles to pick the spider up, so you can carry it outside and let it roam free.

But if you're not heading to the U.K. anytime soon, there's no need to worry. You can get a similar product on Amazon — the My Critter Catcher is a little more expensive at $19.99, but it's a very similar idea. They claim it can work on not only spiders but moths, bees, wasps, beetles, roaches, and more — basically anything that you don't want dead but you also, you know, don't want near you. What a wondrous world we live in.

People definitely have very different relationships to spiders — and to critters of all shapes and sizes. While some people are happy to keep them as pets, most of us couldn't dream of it. And yet, some of us do dream about spiders — a lot (apparently they have big female energy and can be a sign of manipulation in your life, just FYI). Some people have a real phobia of spiders to the point that they need to seek treatment, while others cover their homes in bug sprays for your house and hope that they never have to come in contact with them. For some reason, they evoke an incredibly visceral response in a lot of us — despite the fact that they're only a tiny fraction of our size.

So whether you're someone who can't even get close enough to a bug to put a cup over it and drag it outside or you just like the idea of being able to stay as far away and be as friendly as possible, a humane spider catcher may be the answer. Will it allow you to slowly develop a tolerance for being around spiders, until you ultimately befriend one who has unknowable powers and transforms you into a crime-fighting superhuman? Probably not. But you will feel better about not having to squash one or touch it all. And that's its own kind of superpower.